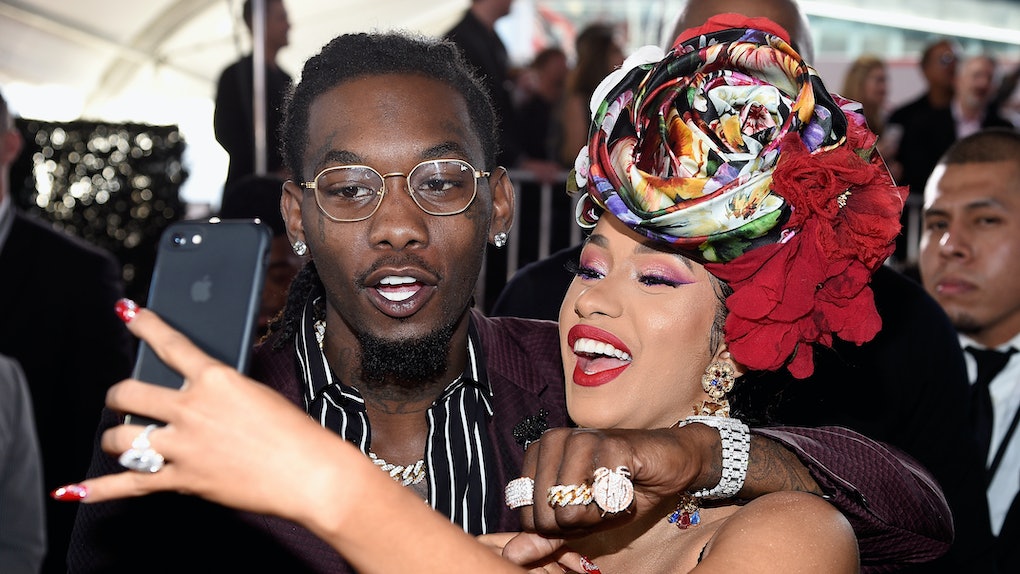 In a radio interview on Wednesday, Feb. 27, Offset revealed new details about how rumors of his infidelity affected his relationship with Cardi B. Offset's quote about his reported cheating shows that the media headlines have taken a toll on him, and that he and his wife are trying their best to work through this together. Offset has been working overtime to win Cardi back since the rumors of his cheating first surfaced in December, and after their appearance together at the 2019 Grammys in February, it appears things between them are on the mend.

"That one mistake made me appreciate her," he admitted to the hosts of the morning radio show The Breakfast Club. The rapper said he was upset to realize how much pain he had caused his wife, and for a while, he was afraid that his marriage might be totally destroyed. Elite Daily reached out to Offset's team for comment, but did not hear back by time of publication.

Offset admitted that social media was hard for him to handle in the months following the bombshell rumors, saying people were rushing to attack him, even when he was pulling out all the stops to win Cardi back. "I love my girl, whatever it takes," he said, sharing that he didn't want to give her too much space because he was worried she wouldn't take him back. Hence the super public displays of his remorse, including the time he crashed her concert with a cake and giant sign that read, "Take Me Back, Cardi."

"I hurt this girl like this? In front of all these people? In front of her family, my family?," he recalled thinking. He added that they are trying to take a step back out of the spotlight to prioritize each other. “You gotta go through steps and different things so we can grow ... real behind the scenes, getting to know each other, getting to know who you’re with, and appreciate them all the way around."

The rapper said that he and Cardi are both focused on building a life for their seven-month-old daughter, Kulture. When asked if they were attending marriage counseling, he didn't specifically say yes or no, but he did make it clear that they are working on their relationship. "We're working through it... gotta keep working... don't stop," he said. They are taking time for the two of them to make their marriage stronger.

It's clear that Offset isn't taking this situation lightly. These infidelity rumors almost cost him his marriage, but he has convinced his lady to give him another chance. He even hinted that he hopes the two will do an album together down the road.

For now at least, we can assume the couple is back together and going strong. Offset recalled how he had feelings for Cardi from the very first time he met her, and he knows that their relationship is something special. He even wants a bigger family with her eventually. He's grateful to Cardi for sticking by his side and confident that they can continue to support one another.