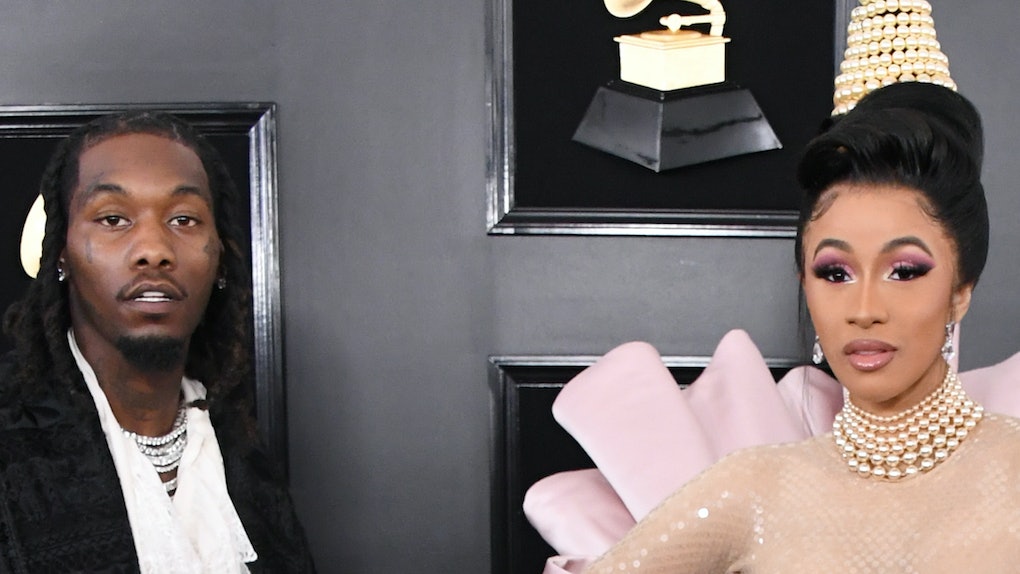 Hip-hop sensation and pop culture princess, Belcalis Marlenis Almánzar, known professionally as Cardi B has been nominated for a handful of well-deserved awards at the 2019 Grammys. Though Cardi has caught our attention this year for her album, performances, and music, she's also made headlines for her on-and-off relationship with fellow musician Offset, one of the three members of hip-hop group Migos. If you're a Cardi and Offset stan, you'll be pleased to hear that Cardi B and Offset went to the 2019 Grammys together looking super coupley.

Cardi B is taking center stage at this year's Grammy awards after a successful 2018. Her nominations include: Album of the Year for Invasion of Privacy, Best Rap Album for Invasion of Privacy, and Record of the Year for I Like It. Cardi will also be performing alongside fellow Album of the Year nominees like H.E.R, Brandi Carlile, Janelle Monae, and Kacey Musgraves. Cardi found out about her Grammy noms while leaving court and in typical Cardi style asked, "How many?" before sticking her tongue out. She is truly an icon and my personal idol.

Well, for the big night on Sunday, Feb. 10, Cardi and Offset hit the red carpet together, with Cardi rocking a navy and pink mermaid-style dress. Offset kept it classic in a black and white ensemble. The pair looked like they were happy to be sharing another red carpet moment together, so maybe their reconciliation is going strong? Fingers crossed.

Cardi shared a video of the moment she found out about her nominations on Instagram. In the caption, she wrote that it didn't matter if she wins or not, she's just excited that people listen to and admire her work.

Ahead of the Grammys, rumors were circulating that Offset wanted to be by Cardi's side at the award ceremony, including attending the red carpet with her and sitting next to her during the show, and it looks like Offset got his wish!

Though Cardi had a lot of career success and become a mother in 2018, she and Offset had some marital troubles that started with rumors in 2017 and spanned this last year. In December 2017, Offset was accused of cheating on Cardi for the first time. A few weeks later, Cardi addressed the cheating rumors in a deleted tweet that said “Why is it a problem that I want to take my time with a decision on my relationship." Both Cardi B's and Offset's representation did not respond to Elite Daily's request for comment on the matter at the time. Throughout the year, Cardi continually addressed the cheating rumors during various interviews and on Twitter. In an interview with GQ in April 2018, Cardi revealed that though she and Offset were in love with each other, they didn't always trust one another. In May 2018, the two attended the Met Gala separately. After more up and downs, Cardi announced her split from Offset in a now-deleted Instagram post in December 2018. Four days later, Offset tweeted that he missed Cardi and in the days that followed, Offset tried to win Cardi back in a variety of very public stunts. It's been a journey, y'all.

But all that may be water under the bridge now. Earlier this month, Cardi told Entertainment Weekly that she and Offset are working things out and "taking it slow." She said, "We always gonna be a family that's together. My baby loves us both." When asked if there was hope for the couple, Cardi said, "Yeah."

Hopefully these two are able to figure out an arrangement that's best for both of them and baby Kulture. For now, we can all enjoy them both during tonight's show.