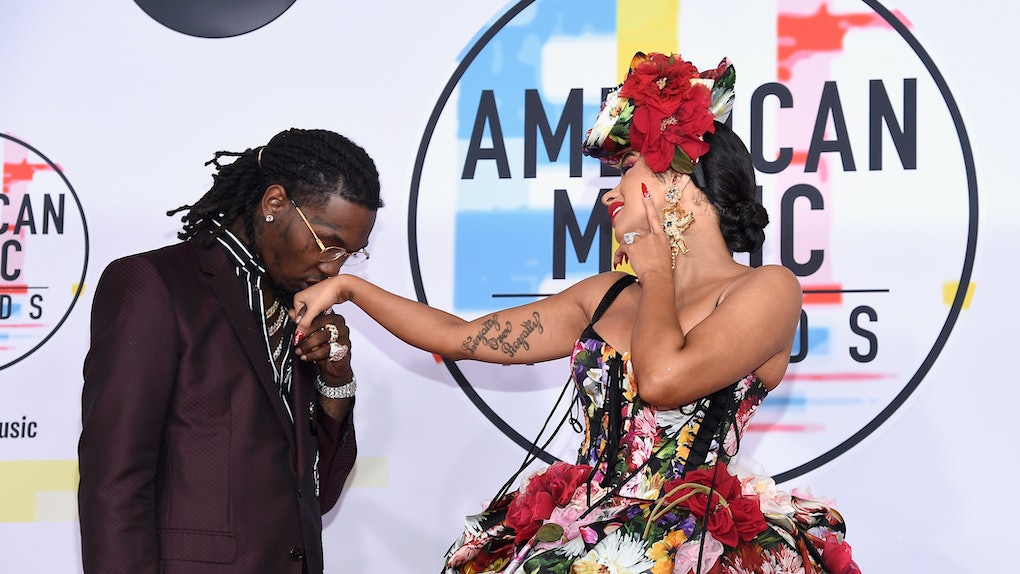 So, will they or won't they? It's the question fans of Cardi B and Offset have been asking ever since the pair split back in December of 2018. The good news is, the "Money" rapper opened up about where she and her husband presently stand, which may or may not be what you expect. Simply put, Cardi B and Offset's latest relationship update involves "taking it slow." Elite Daily reached out to representatives for both Cardi and Offset for additional comment on the subject, but did not hear back by the time of publication.

Though the two have previously signaled that their marriage is back in full swing, Cardi suggested that it's not what it seems. Speaking to Entertainment Tonight on Feb. 1, the 26-year-old hitmaker said that she and Offset are in the process of "working it out" and are taking their time with their relationship.

She continued, "We always gonna be a family that's together. My baby loves us both." She went on to say that for the sake of little Kulture, the 6-month-old daughter she shares with Offset, they keep in contact with each other and spend time as a family. When asked if there was hope, Cardi tilted her head in consideration, adding, "Yeah."

BEST. NEWS. EVER. I don't know about you, but I love love and if they're willing to put in the work to make their marriage last, then who am I to hate on that?

And besides, they really do seem in it to win it. Shortly after making those comments, she and Offset reportedly hung out at OAK nightclub in Atlanta, Georgia, per TMZ, marking yet another time the couple has stepped out together publicly since breaking things off last December, which reportedly had to do with their relationship becoming more about business than it was romance. Elite Daily previously reached out to both teams for comment on the reason behind their break up, but did not hear back.

Previously, the pair vacationed in Puerto Rico just two weeks after calling it quits. Cardi's reasoning? "I just had to get f*k*d. That’s all." She continued, “I feel rejuvenated, b*tch. I feel baptized. I feel like a brand new f*ck*ng woman.

But there apparently won't be any baby No. 2 any time soon, even if they officially get back together, so don't get your hopes up for that just yet. In a February interview with People, the Invasion of Privacy rapper said she wants to wait a bit before giving Kulture another sibling. “I want a second child, but I got so much things to do first. It’s like, I want to learn more, you know?” Cardi explained. “It’s not that easy to have a child, so you just want to learn more and more and the process and wait ’til they get a little bit bigger.”

She continued, "Right now, a baby requires 24/7 attention so imagine two? That’s why when people have twins, I honestly … I don’t know how [they do] it. It’s hard!”

I don't blame you, girl. You've got a burgeoning career, a marriage, and a little one to take of. Just promise to keep us in the loop with updates throughout the way. OK?

More like this
Addison Rae & Bryce Hall Unfollowed Each Other After She Was Spotted With Jack Harlow
By Michele Mendez
Bella Thorne's Quotes About Coming Out As Pansexual Are Filled With Pride – EXCLUSIVE
By Brandy Robidoux
Here's What Harry & William Said To Each Other At Prince Philip's Funeral, According To Lip Readers
By Brandy Robidoux
Stay up to date