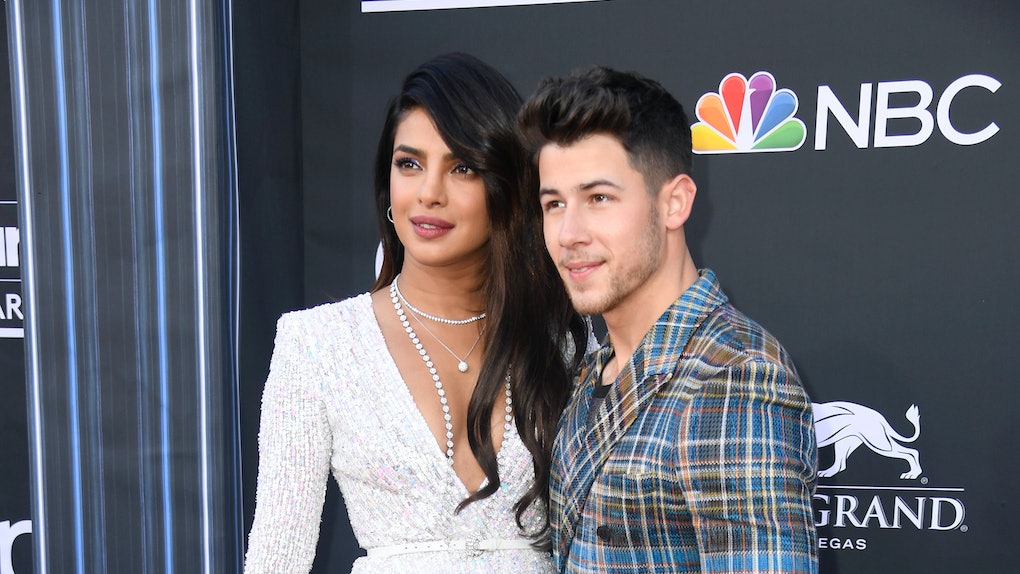 Truth be told, I’m on a Nick Jonas and Priyanka Chopra content binge lately. Call me a superfan, but I can’t stop reading, watching, and following everything about their lives, including their many public appearances together. Nick Jonas and Priyanka Chopra's red carpet body language is surprisingly similar in every photo, and as soon as I noticed it, I knew there had to be a deeper explanation.

Body language expert Patti Wood, who is a pro at analyzing every tiny detail, told me that this couple’s red carpet photos provide more insight about their love than you might expect. If you look through them, you’ll notice that Chopra and Jonas often pose with closed-mouth smiles, and Jonas holds his hand at his side or near his stomach. They both wear serious expressions and are diligent about posing for the cameras. Wood takes note of the way they stand, saying, “I do like how they are standing in a ‘love V,’ angled halfway in towards each other and overlapping.” This signals closeness and affection.

She also says, however, that some aspects of these photos don’t look quite so romantic. Read on to find out every detail of Jonas and Chopra’s red carpet stances… and what they say (or don’t say) about their IRL connection.

It doesn’t take a rocket scientist to tell that Jonas looks a little stiff here. What’s going on with his right hand? “Though his hand around her waist shows more of his fingers, the fingers don’t align,” Wood notes. “Some are bent over only at the tips of the fingers, so it looks the way it would feel to her — odd.” We can’t quite tell what Jonas is doing with his left hand (Is he reaching for her? Is he holding his suit jacket?), but Wood notices that Chopra looks regal AF. “She is cool and confident with her heat window open to the camera,” she notes — so whatever awkwardness is happening with Jonas isn’t translating over to her.

In this photo, Chopra looks very “serene” and “placid,” according to Wood. She’s obviously in a posed stance for the cameras. Again, Jonas is posing with his left hand held in toward his body. “It’s clear that his left arm is protecting his vulnerable ‘ventral front,’ and see the stress in his stance,” Wood notes. “Also, see his tense, pressed tight lips.” Chopra looks much more chill and confident than her hubby here… perhaps because of her history in pageants or on television? Either way, she’s serving looks.

Here you can see the couple’s feet, and notice how Jonas’ stance is turned inwardly toward his wife. “His feet are aimed at her, and hers are towards the camera,” Wood explains. “He does so much of the work to be connected to her, to show they are a couple. He seeks her.” Especially at an event like the Isn’t It Romantic premiere, where Chopra is the star of the show, Jonas wants to show his full support by standing at her side.

Somebody To Lean On

During their Met Gala appearance in 2017, once again, Jonas was all about letting his wife take the spotlight. “I like that their feet are angled towards each other and her hip is set resting towards him, and that they are overlapping,” Wood notes. “But he is leaning in towards her with his full body.” Again, his rigid stance contrasts with her ultra-confident demeanor.

It’s hard to say exactly what all this means for their relationship, but it’s pretty obvious that Jonas wants to be close to his wife whenever they’re together. Even if he’s looking a little nervous, he’s always facing in toward her, signaling that she’s (literally) there for him to lean on. In fact, Jonas has spoken publicly about how he likes to let his wife steal the spotlight at red carpet events — he recently told Entertainment Tonight that he plans to “keep it simple and let her shine” during the 2019 Met Gala on May 6.

My major takeaway from all of this? I need to practice my Priyanka Chopra red carpet smolder. I mean, seriously, does she have the smize down pat, or what?