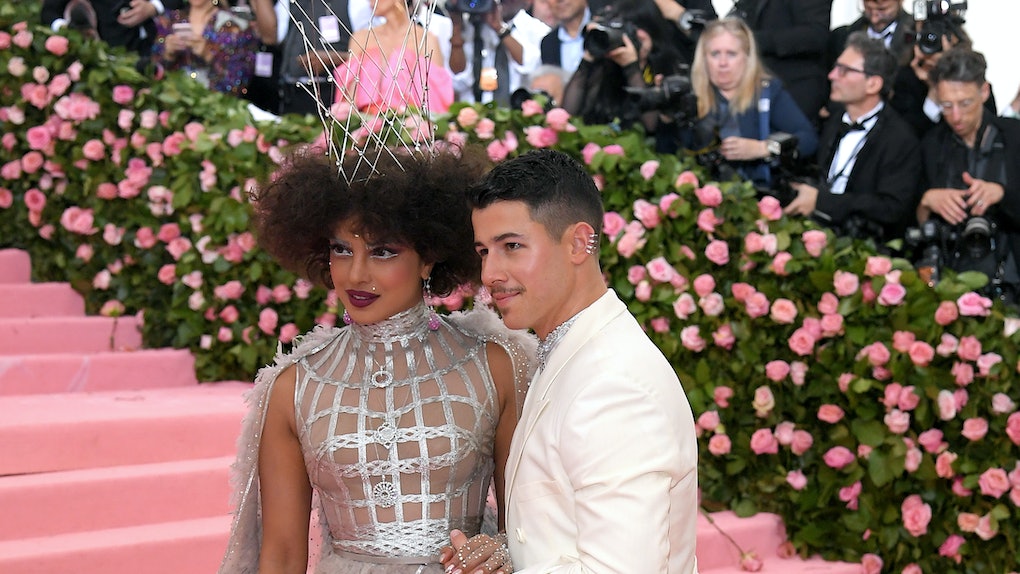 Nick Jonas and Priyanka Chopra never do anything half-way. Their first interaction was via Twitter DMs, they had what felt like a whirlwind romance, and their December 2018 wedding ceremonies in India were the stuff of party-planning legend. The 2019 Met Gala on Monday, May 6 was no exception. Their looks? Beyond. Their body language? A little off, according to an expert. Nick Jonas and Priyanka Chopra's body language at the 2019 Met Gala is cute, but a little stiff.

Their body language at previous events has been consistent with their body language at the 2019 Met Gala. It's common to see Jonas turned toward Chopra, and Chopra turned toward the cameras. While this definitely does not spell anything necessarily negative for their relationship, it's safe to say these two know their angles. Granted, Chopra is a world-famous actress, and Jonas is a musician of Jonas Brothers fame, so it's safe to say they know how to pose for the cameras. But body language goes beyond that.

You can tell a lot about a couple's relationship dynamic by the way they move around each other, pose for photos, and touch each other. And even though this couple had an epic meet-cute (Jonas slid into Chopra's DMs in September 2016, and when they finally met up in person, he reportedly told Chopra, "You’re real. Where have you been all my life?"), their body language reads a bit disconnected.

Here's what body language expert Patti Wood had to say about their pink-carpet appearance, and what their body language at this event might say about how they were feeling on May 6.

Jonas is not relaxed.

While Chopra and Jonas looked adorable together in matching sparkly shoes, Wood explains that Jonas' posture is pretty important here. "His feet are always angled to her, showing how important she is to him, but he is rarely relaxed," Wood tells Elite Daily.

They weren't totally focused on each other.

While this photo is certainly romantic, Wood explains that their focus might not totally be on each other. "I love that this time there is a photo of them gazing into each other’s eyes, but I wish she was less focused on showing off her outfit facing toward the cameras," she says.

Of course, Chopra could just have wanted to show off her awesome ensemble, which... I mean.. understandable. She looks amazing, and the event is all about fashion. This doesn't necessarily mean that she isn't interested in her man, but it could mean that the two know how to give the cameras what they want, and are focused on the entire point of the night: Their Lewks.

The cameras might be her priority in this scenario.

In this photo, Chopra seems much more concerned with facing the cameras than with facing Jonas, which might mean she "isn't intent on making him a priority by facing and/or leaning in toward him as he is to her," says Woods. Again, this may not be a reflection of their relationship dynamic, but rather, that their priorities were probably about making sure their outfits got the attention they deserved. It's the Met Gala, people!

There seems to be some tension.

All in all, both Chopra and Jonas look pretty stiff in this photo. Woods notices one recurring pattern, especially in looking at Jonas.

"One of the stand-out aspects of their red-carpet moments is how often he takes on a British nobleman pose with his arm folded protectively across his chest, and the hand over his vulnerable ventral front, and his facial expression formally Victorian, with a great deal of tension in this mouth," Woods explains.

What does this mean for the "Sucker" crooner? No one can know for sure. The Met Gala is a high-stakes event, so a bit of nerves or tension isn't too far-fetched. But considering how in love these two seem everywhere else they're seen together, their posture might've been tense for other more obvious reasons. (If I had to pose in front of cameras wearing high heels and, essentially, a costume, knowing the entire world would be watching me, I too would be stiff!)

More like this
Why Did Jennifer Lopez & Alex Rodriguez Break Up? She Dropped A Hint On Instagram
By Candice Jalili
Zoë Kravitz's Instagram With Taylour Paige Shows Them Looking So Happy Together
By Candice Jalili
Travis Barker's Birthday Instagram For Kourtney Kardashian Was So Extra
By Lydia Wang
Stay up to date