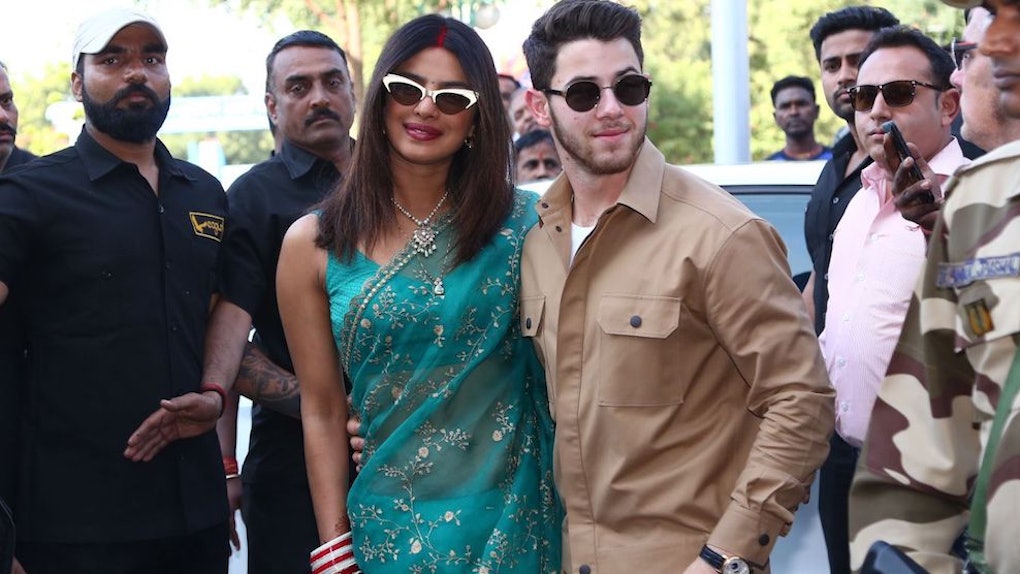 Well, the youngest Jonas brother is officially off the market! Over the weekend, Nick Jonas and Priyanka Chopra were married in not one, but two lavish ceremonies in Jodhpur, India, and from the looks of the photos released so far, they couldn't be happier. But now that they're Mr. and Mrs., looking closely at Nick Jonas and Priyanka Chopra's body language on the cover of Vogue magazine just goes to show that these two only have eyes for each other, and that their love is totally genuine and incredibly sweet.

Jonas and Chopra's wedding was reportedly a beautiful blend of their two cultures, and it certainly seems as though everyone involved had a great time. But in addition to their wedding and all that it entailed, Jonas and Chopra also graced the cover of Vogue's January 2019 issue (and the magazine's very first digital cover) as they shared more about their relationship and how they fell in love. In a telling interview, they revealed they'd had their eyes on each other for much longer than the public originally thought (they met at an Oscars' after party last year, per the magazine), and that their attraction to each other just felt right

Their love can totally be felt in the interview, and according to a body language expert, that's no accident. It's clear in their cover shoot and accompanying video interviews, too.

1. Even while posed, they're very much in love.

Posing for the world's biggest fashion magazine can't be easy, but Chopra and Jonas look totally at ease. "Every time we see them in posted shots, their faces seem like they're stuck together," body language expert Traci Brown tells Elite Daily. "That's some real intimacy." But that's not all.

"By leaning her back against his chest [it] signals that she trusts him," body language expert Blanca Cobb tells Elite Daily. "Nick's got her back both literally and figuratively. What's most telling about their intimacy is Nick's hand resting right underneath her breast. An intimate gesture shared by lovers."

In this video of the happy couple sharing an intimate moment, both body language experts agree that there is a palpable heat. "What a sexually tense moment between the two," Cobb observes. "Their eyes zero-in on each other’s lips and as the temperature rises, Priyanka bites her bottom lip. Very hot."

Brown also notices the chemistry, as well as some subtle body language cues about their relationship. "Here they are with their heads stuck together again. When you're this close together but not looking at the other person with eyes closed, it's because they're feeling the intensity of the moment," according to Brown. "Super hot."

I don't know about you, but I'm Burning Up. (Sorry, couldn't resist.)

3. They can really be themselves around each other.

In this video of Chopra dancing along to Jonas' song Close, the couple truly takes their time around each other. "This gets interesting at about 1:33, he's clearly showing up being the rock that she needs to be an even better version of herself," Brown explains. "Is this how their relationship really is in real life? Maybe so!"

"As Priyanka walks closer to Nick, his sexy smile reveals how he feels about his woman," Cobb says. "As they walk off the set together, hand-in-hand, Priyanka and Nick capture the moment by being playful. Priyanka takes his hand so she can get closer to her man. Gotta love when a woman takes charge and lets her man know what she wants."

4. They really do seem built to last.

Vogue also had Jonas and Chopra play The Newlywed Game on camera — a bit where they had to answer questions about each other and reveal their answers on a white piece of paper. "Playfulness and fun describes Priyanka and Nick playing The Newlywed Game," says Cobb. "When you can joke around, laugh at and with each other, than you have something special. There were tender looks and smiles shared between the two when answering questions. You get the sense that they like each other, which is important in a marriage."

"I'm seeing how comfortable these two are with each other," Brown adds. "And they're really comfortable sharing the spotlight which is unusual for many celebrity couples." Additionally, "they even have fun with each other's faults. From a body language perspective, I notice that their legs are crossed away from each other. Usually people about to get married or recently married will cross their legs toward each other. This could reflect the competitiveness of the moment."

In short, Jonas and Chopra are totally in love, and their body language on the cover of Vogue only makes that even more clear. Now that these two are married, they have a lifetime of steamy moments, fun dance moves, and silly games together to go. I can't wait to see what they have in store. Congrats, you two!