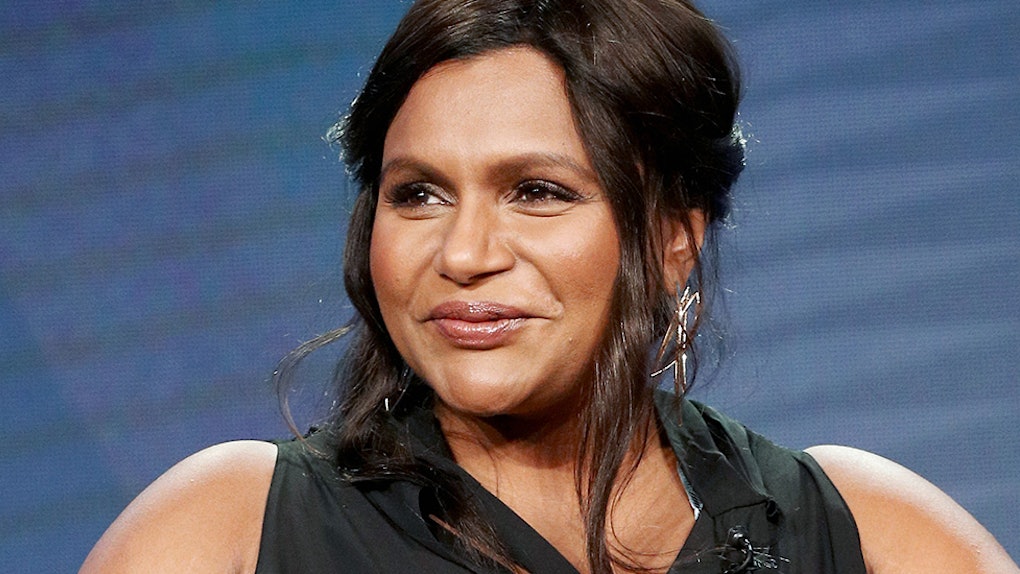 Mindy Kaling's Blonde Hair Was An April Fools' Joke, But Everyone On Social Media Wants It To Be Real

Don't get me wrong, I love a celebrity drop-of-the-hat hair change a la the many wigs of Cardi B and Kylie Jenner, but there are some celebs I've come to just expect to maintain their signature look, no questions asked. That said, I was pretty sure Mindy Kaling's blonde hair that she posted to her Instagram was an April Fools' joke the moment I laid eyes on it — but the gag was, my love for the look was no joke at all. Kaling is a downright beautiful brunette, and I've never even for a second imagined her going blonde, but now that I've seen a glimpse of what could be, it's honestly all I can think about.

Kaling is known for her incredible sense of humor and comedic timing, and when April Fools' Day rolls around, I know better than to take any celebrity posts or photos seriously — in my mind, everything is a prank until proven real. The thing is, though, most celebs center their jokes around things their fans don't want, like retiring from performing, feuding with a friend, et cetera. Perhaps Kaling thought her fans wouldn't be into the blonde hair she tried to fake on April Fools' Day, but the exact opposite was true. I feel that, just this once, I can speak for almost everyone, when I say her fans are obsessed with this look.

Before I give Blonde Mindy her moment, take one last look at the equally gorgeous, radiant, brunette Mindy, to compare:

Haters aren't the ones saying it's Photoshop, Mindy, just us disappointed fans! I loved this look, and I wanted it to be real! Rather than opt for an icy platinum blonde or anything too harsh, Kaling's faux blonde is a buttery blend of balayage with dark roots, and the warm color suits her complexion perfectly.

And while everyone agrees Kaling is a beautiful brunette, it seems all the fans and friends commenting on her photo are in favor of a little blonde ambition. "Ummmm ok do it tho," encouraged model Tess Holiday, followed by celebrity makeup artist Daniel Martin praising the look: "Such a great color on you though! Yaaaasssss." "Bruhhhh I thought it was Khloé Kardashian for a second lol," wrote one fan, and now I can't unsee it. They do both have gorgeous cheekbones, after all! Kaling was also compard to Beyoncé, J. Lo, and a generic Bachelor contestant. LOL.

Is it just the blonde lob and soft smile? I feel like Kaling is a lost Kardashian sister! Get her a contract for KUWTK, stat:

While all her fans were kind, some made it clear that they thought the blonde was just too Kardashian for Kaling. "Love you Mindy but naaaa girl! Darker way better!" wrote one user. "I’m liking this bc of the funny caption not bc I think you should go blonde like apparently everyone else does. #TeamBrunette," another made clear.

Over on Twitter, fans are insisting Kaling get some bleach and make this prank dye job a reality:

Imagine playing an April Fools' Day prank and getting told you look like a Kardashian, J. Lo, and Beyoncé as a result? Sounds good to me! While I'll happily welcome back brunette Kaling with open arms, I've still got my fingers crossed she decides to go blonde for real. Our girl can rock any hair color!

More like this
Olivia Rodrigo Debuted New Bangs Ahead Of Her "Deja Vu" Release
By Margaret Blatz
Lucy Hale Debuted Blonde Hair & Looks Like A Whole New Person
By Margaret Blatz
When Does Tati Beauty's Second Product Launch? Something New Is Coming
By Bella Gerard and Theresa Massony
Stay up to date