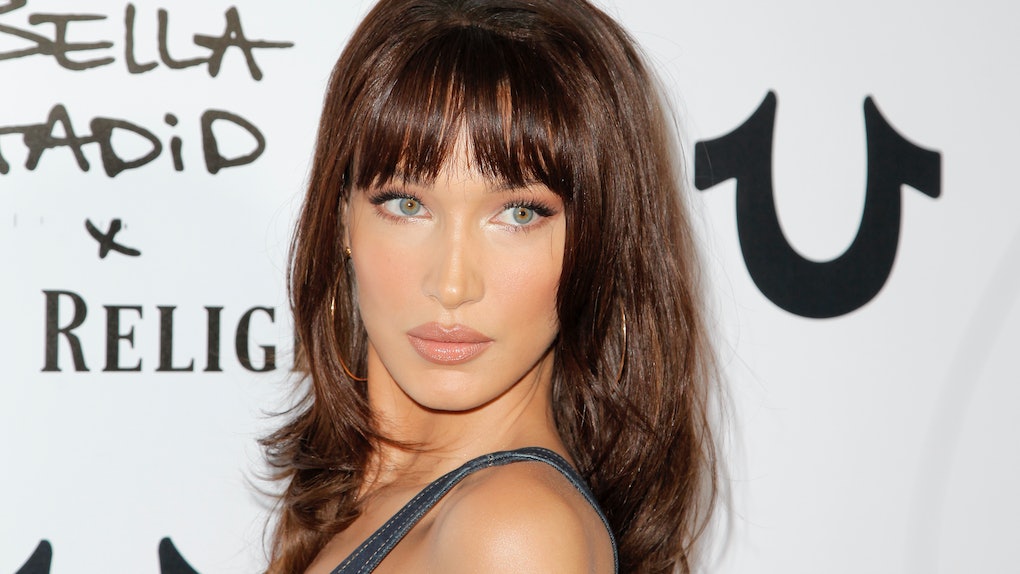 As someone who isn't actually all the good with celebrities, I admit that when the Hadid sisters first hit the scene, I was only able to tell them apart by referring to Gigi as "the blonde one" and Bella as "the brunette one." Don't hate me, I'm just not great with names! And though I'm now familiar enough with the supermodel sisters to not need to use their hair colors to distinguish them, I've always sort of liked their light-dark-hair dynamic, but it seems Bella Hadid's new dirty blonde hair is about to change all that. The brunette half of the sisterly duo unveiled a lighter look on Instagram, and as a fellow Bella who transitioned from brunette to dirty blonde, I salute her in her hair color journey. Watch out, Gigi, the blonde-ish Bella's coming for your lewk.

While I certainly like both Hadid sisters, Bella has always been the favorite in my book, primarily because we share the same name. For this reason, I feel an inexplainable kinship with her, which culminated in the one time I stood weirdly close to her backstage at a fashion show while she puffed on her since-abandoned Juul. It was so cool. But back then, our girl was a chocolatey-brown brunette, so when I opened Instagram this week to see her with light hair, I was taken aback.

"Back to dirty blonde, back to my roots ! Per @mertalas wishes 💫," Hadid wrote in the caption, referencing friend and fashion photographer Mert Alas. I'm going to gently present the idea that this is light brown, not dirty blonde, but I love it anyway, so call it what you want, Bella — I'm here for it.

Alas also uploaded a photo with a peek at Hadid's newly-sunkissed strands:

If you need a reminder, Hadid's usual locks are dark:

The whole light-dark dichotomy has always been Bella and Gigi's sisterly thing:

But as Hadid noted in her caption, her OG roots are in fact a dark blonde:

A lot of children have light hair in their youth that darkens as they mature, so while the baby pics don't lie, I'm not exactly signing off on Hadid as a technical "natural blonde." Either way, though, her new color is gorgeous, and it's the ultimate summertime update to her look.

The light hair really emphasizes her eyes and freckles, right?

"Am I the only one who sees light brown??" wrote one user beneath her Instagram photo, and I hate to do it, but I have to agree. Or maybe it's a deep strawberry blonde? No one is sure, TBH. It's still a pretty dramatic change for a dark brunette though, so let's let her embrace her moment, people! "YAAASSSS blondes really do have more fun," one user encourages her, another fan in favor remarking, "IT'S A YES FROM ME ❤️🙌."

To really solve the "dirty blonde vs. light brown" issue, I'll need to see a side-by-side selfie of Bella with her actually-dirty-blonde sis, Gigi. Bella has been changing up her hair pretty regularly as of late, even opting for some piecey bangs at one point, so let's keep our fingers crossed the Hadid family sets aside some time to take an all-blonde Christmas card before she goes back to dark. Imagine how chic that would be.