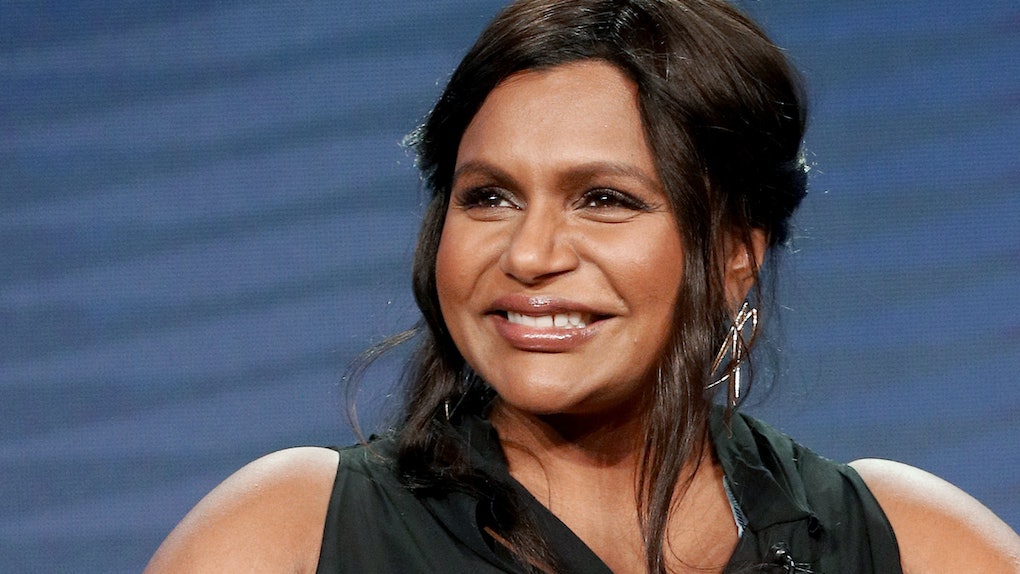 Mindy Kaling's Quotes About Confidence Will Inspire You To Find Yours, Even On The Hard Days

The way I see it, Mindy Kaling is the queen of many things. As an actor, comedian, writer, and producer, she's moved beyond triple-threat status, and she's basically encompassed the linear definition of success. And while the The Mindy Project star has countless quirky quips up her sleeve, there have been many times when Mindy Kaling's quotes about confidence established, for me at least, what it means to genuinely feel self-assured, to know exactly who you are in a world that, so often, will try to tear you down, not to mention hold you to ridiculous standards. So, sure, I may love Kaling for her sense of humor, as well as her impressive acting and writing chops, but it's the wisdom she's imparted over the years about self-confidence that, IMO, makes her a true role model.

Establishing a strong sense of self-confidence is difficult enough without the all-eyes-on-you lifestyle Kaling has led since her breakout role on The Office, but it seems as though the comedian has done so with grace. By perfecting her craft as a creator and actress, and navigating what it means to be comfortable in the skin you're in, Kaling has not only flourished in her industry, she's also become one hell of a woman to look up to.

Confidence is something that everyone struggles with from time to time. If ever yours is lacking, and you're in need of a boost, check out these quotes from Kaling that'll inspire you to own who you are, for exactly how you are.

On The Difference Between Confidence And Entitlement

There's a thin line dividing confidence and cockiness, and oftentimes with cockiness, comes entitlement, aka the expectation that what you want is what you should automatically get. But even though entitlement, like cockiness, tends to have its own negative connotation, in her book, Why Not Me?, Kaling explained that confidence, to a certain degree, is entitlement — but it's entitlement that has been earned.

"Entitlement has gotten a bad rap because it's used almost exclusively for the useless children of the rich, reality TV stars, and Conrad Hilton Jr., who gets kicked off an airplane for smoking pot in the lavatory and calling people peasants or whatever," Kaling wrote. But entitlement in and of itself isn't bad, the actress clarified, continuing,

Entitlement is simply the belief that you deserve something. Which is great. The hard part is, you'd better make sure you deserve it.

Being confident, in part, means being resilient to the nasty things people might say about you. It means recognizing that those negative comments, and the people who are saying them, simply aren't worth your time, because when all is said and done, you are who you are, and there's not much you can do to change it. You could put your energy into caring about what people say and trying to please them, but you could also focus your energy on accepting yourself for exactly the way you are. For Mindy Kaling, it seems like she's (wisely) gone with the latter.

"Being called fat, being called not pretty, these are just weapons that men can use against women that we can't use against them," Kaling said in an interview with Refinery29. "I am fairy impervious to when people say those things about me, because it's like, well, I was born this way and I can't really change that."

On Instilling Confidence In Others

Confidence isn't something you're necessarily born with, which means you might have to put a considerable amount of effort in to work on it throughout the course of your life — and that's OK. In fact, it's totally normal, and it's exactly why Kaling wants to make sure she instills a sense of confidence in her baby daughter early on in her life. Back in May 2018, the 39-year-old actress told Shape that she not only wants her daughter to "learn at a young age that exercise is a great habit to have," she also wants her to feel confident in everything she does.

"I was not [confident] as a child, and I want my daughter to be really confident all the time," Kaling explained. "I'm going to do that by always making her feel like she is good enough and not being stingy with encouraging comments. That goes against my nature a bit because I'm a critical person—of myself, of the things I work on—but it's very important to me to make sure I instill confidence in my daughter."

"Cool" is such a subjective term, which is exactly why Kaling told BuzzFeed back in 2015 that the best way to be and feel "cool" is to disregard the adjective altogether, and just do you.

"I have just focused on the things I am good at and not focused as much on being cool — although like any other human I'm fixated on cool — and just hoped that other people assumed I was [cool]," she explained, adding that even the "really, really cool people" probably never think of themselves that way, let alone try to be "cool." In other words, Kaling's advice is to "try to ignore" these arbitrary definitions of what it means to be "cool," and instead, just be the best version of yourself that you can.

When people get the confidence knocked out of them, I feel like it was probably false confidence because you can't, I don't think, get it knocked out of you when you are truly confident. I think you have to be able to have everything taken away from you and be sitting in a ditch and know you could build it up from scratch. That's how I feel and that's how I know it's true confidence.

On How To Express Your Confidence

To me, confidence has always been one of those things that just radiates from a person, and evidently, Kaling agrees. During a 2015 interview with BuzzFeed, The Office alum explained that, for her, confidence is best communicated by showing someone what you're made of, rather than telling them directly.

"I started doing that when I was in elementary school and high school when I would audition for plays," Kaling said of how she showed her parents that she felt confident in her talents. She went on to explain that, in college, she would write and produce plays, and it was through this hard work that her parents never had a reason to doubt her success.

"Like anything else, it's show, don't tell," Kaling continued. "And if you feel like you need to tell your parents, 'It's in me, I just can't show it' then maybe you need to just show it for a while, and then come back to them and say, 'See?!?'"

On The Power Of Confidence

Sticks and stones may break your bones, and yes, words can definitely hurt you, too. But, according to Kaling, if you have an unyielding sense of confidence, even the most harmful words might not hurt quite as much — because, after all, they're just words.

"Maybe because I have professional confidence that comes from my business, but calling me chubby cannot hurt me in the way it does so many, many girls, millions of women," Kaling told The Guardian back in June 2014. She continued,

When you've seen Instagram comments like, "You're so ugly, you should kill yourself," it's like, I went to college. How could I be offended by someone who talks about what you look like? I wouldn't even deem you a person I'd speak to.

On How To Respond To People Who Say, "You're Not Chubby, You're Beautiful!"

No matter how self-assured you feel, there will always be people who, if they're not trying to directly tear you down in some way, will indirectly imply that your confidence isn't legitimate, even if they don't actually mean to do so.

Back in September 2015, Mindy Kaling touched on this topic in an interview with The Guardian: “You know what’s funny? If I call myself a cute, chubby girl, the natural kind woman’s response is, ‘You’re not chubby! You’re beautiful! And thin!’" she told the outlet. "And I always want to hug the person and say, ‘It’s OK, I identify as someone who is cute and chubby – that doesn’t mean I’m not worthy of love and attention and intimacy.’ And also, my priorities are not such that I’m mortally offended by someone thinking that.”

Say it louder for the people in the back, Mindy.