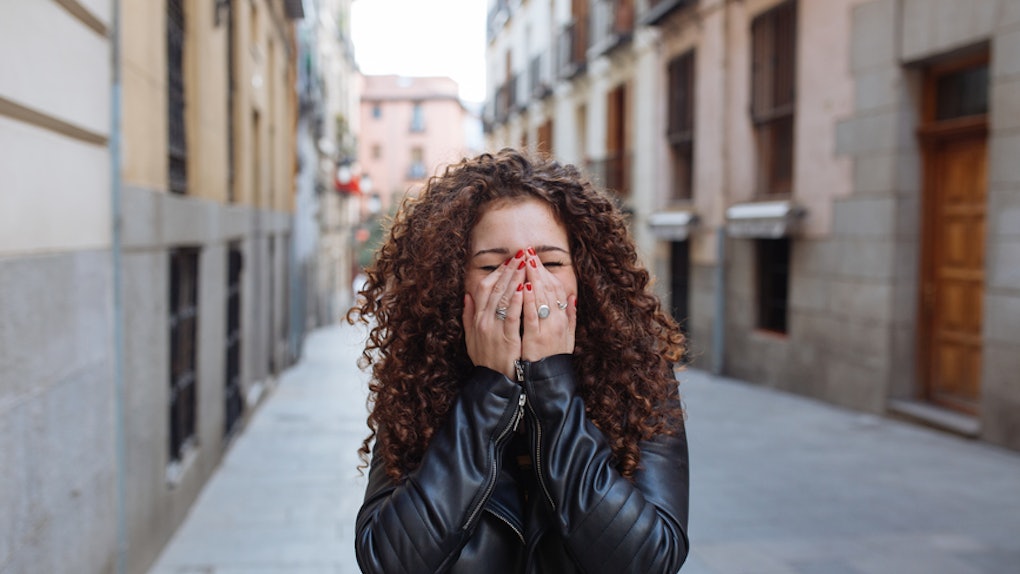 April Fools' Day brings me deep anxiety. Well, almost everything brings me anxiety: subway platforms, the threat of nuclear war, the weird bump on my elbow... I'm extra. But I really hate when I expect things to go one way, and they go an entirely opposite, terrible way. (See: the panic attack I suffered when my accountant told how much I owed the IRS this year.) I don't like surprises — sue me. (Actually don't, re: taxes.) I think the meanest April Fool's pranks are those that get someone's hopes up before crushing them into morsels smaller than Doritos dust.

Have I had a Doritos-related April Fools' Day prank pulled on me, you ask? No, but I'm sure you could come up with something extra creepy to put inside a bag of Cool Ranch to scare your partner. Yes, that's right, I said "partner." If you are looking to get out of your relationship, April Fools' Day is actually a really great day to do it. You can be mean and funny at the same time!

If you're looking for a very cowardly, rude, and possibly viral way to break up with your partner, just pull one of these incredibly mean pranks on them. JUST KIDDING! Here are five completely cruel April Fools' tricks that you should never, ever play on someone you love, even a little bit.

Breaking up on April 1 is so uncool it might as well be Snapchat. (Burn!) While April Fools' Day is a holiday of sorts, a lot of us forget that people actually take part in it past elementary school. If you sit down with your partner and tell them you're dumping them, and only break out an "April Fools'" once their eyes start sweating, you are harsher than Simon Cowell circa season one of American Idol.

If your partner has any self-respect, they will dump you for real in return. Only positive: if you actually want to break up, I guess this makes it so that you don't have to be the "bad guy"? That is until everyone learns how much of a Regina George you really are.

Staging a faux-robbery is maybe three percent kinder than staging a faux-breakup. (So, not at all.) If you have the keys to your partner's home, head over there, ransack it, and make it look like they've been robbed. If you're feeling like extra trash, break their things and steal the cash from their wallet. OH, except this will never be "funny" or "cute" and they will probably call the cops on you. Don't do this. Ever.

3. Put An Actual Mouse In The House

Or a spider in the sauce pan. Or bed bugs in the bed. While placing fake insects and critters in the fridge or cereal box are common April Fool's tricks, bringing actual moving rodents into the picture certifies you as a 100% rotten and garbage human. DO NOT DO THIS! There are easier ways to end a relaysh.

4. Fake Propose To Them

Jim does this to Pam on Season 4 of The Office, and I find it rude, much like I find most of Jim's dated behavior on that show. If you're eventually going to propose to your partner, don't pick April 1 as the day to fake do it. That's a cruel and guaranteed way to explode your relationship.

The only allowable April Fool's proposal is if you get on one knee and open an empty box for your partner, say April Fools', then whip out a real ring and do the actual proposing. Overly meta, but a tiny bit cute.

5. Put A Little Ayahuasca In Their Coffee

NO! DO NOT DO THIS. Who are you, Jeffrey Dahmer? THIS IS VERY MEAN AND DANGEROUS AND WILL LEAD TO MANY TERRIBLE BODILY FUNCTIONS FOR YOUR PARTNER. Some alternative, non-relationship ending things to do to someone's coffee as a normal person prank: put out salt instead of sugar, tape a LOLs message to the bottom of their mug, or just do like Jimmy Kimmel did and put nothing in it, but shout "April Fools'!" as your partner takes a sip. The best pranks aren't even pranks at all. Be kind this April 1.