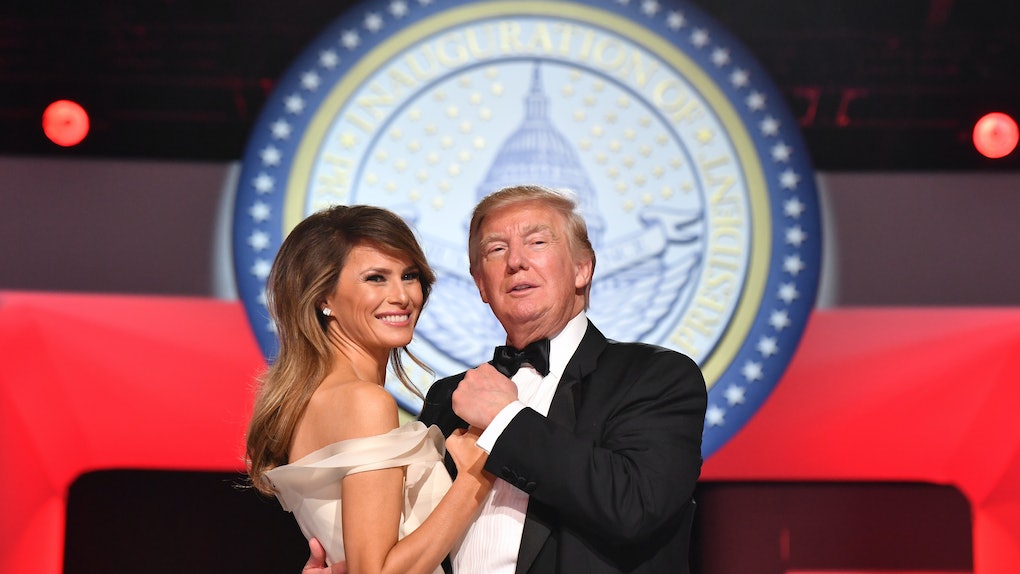 I don't know about you, but in my personal opinion, it feels like Donald Trump's presidency has already lasted about five or 10 years at this point. Maybe even decades. Somehow, though, it's only been two full years since Donald Trump's inauguration, which is actually pretty wild to think about. And based on Melania Trump's tribute to Donald Trump's inauguration anniversary, it seems as though the first lady is feeling pretty nostalgic about all of it. In fact, it refers to their last two years in the White House together as "unforgettable." I guess it all depends on how you look at it.

On Sunday, Jan. 20, Melania Trump took to Instagram and Twitter to discuss how she's feeling at the two-year mark of her husband's presidency. The post includes a photo from the presidential inauguration on Jan. 20, 2017, which shows Melania and President Trump standing together on a giant version of the seal of the president of the United States. The caption reads:

It has been an unforgettable two years in the @WhiteHouse. I am honored to serve this great nation! 🇺🇸"

Two years into her time as the first lady, it looks like Melania enjoying the "[honor] to serve this great nation."

From Melania's nostalgic post, it seems like she thoroughly enjoys her position as first lady, since she assumed it two years ago in 2017.

As first lady, Melania has been busy. She introduced the "Be Best" campaign in May 2018, which focuses on three pillars the first lady believes pose the most challenge to children: well-being, social media, and opioid abuse. Another first lady duty is all about the holidays, and Melania has been a part of decorating the White House for the 2017 and 2018 Christmas seasons, which she also shows off on her social media.

With endless appearances, engagements, a little jacket controversy, and taking care of her and Trump's 12-year-old son, Barron Trump, the White House has probably been a pretty busy place for Melania the past two years, but she seems to think of it as an "unforgettable" time.

Looking back on her time with Trump in the White House is a short trip down memory lane, but Melania and Trump have been together for quite a while now. In fact, right after Trump separated from Marla Maples, he and Melania met for the first time at a New York Fashion Week party way back in 1998. Trump popped the big question about six years later in 2004, according to The New York Post, before their son, Barron Trump, was born in March 2006. So, they go pretty far back, and now Melania is looking back on their most recent times together in the White House.

Even though it's only been two full years since her official transition to the White House, Melania appears to be comfortable in her new role. And with her post shared on Sunday, she also seems to feel pretty "honored" to serve as first lady.