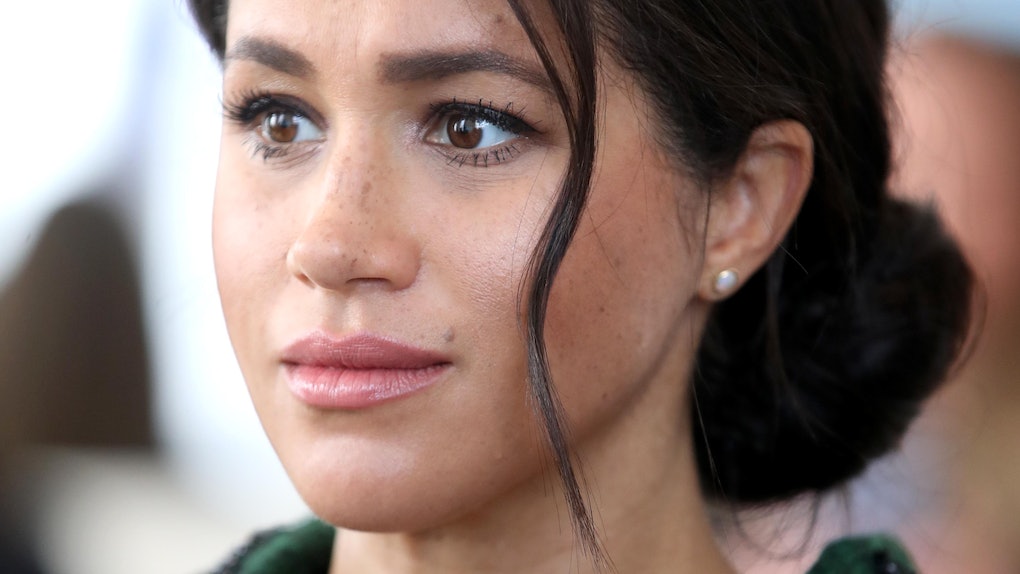 Meghan Markle's Relationship With Her Dad May Be On The Mend, According To Royal Experts

Well, this is weird. We've somehow managed to move through a series of days and weeks without a peep from Meghan Markle's father, Thomas Markle. The Duchess of Sussex's dad is usually speaking with some tabloid or publication about his daughter and, nine times out of ten, he isn't saying anything very nice. However, as of late, the new royal's dad has been suspiciously quiet. It makes a fan wonder: Where does Meghan Markle's relationship with her dad stand? If he is finally taking into consideration what she's been reportedly telling him this whole time, the answer could be that he's trying to win back her trust. Elite Daily previously reached out to Kensington Palace for comment on Meghan Markle's communication with her father but did not hear back by the time of publication.

If you've followed the royal family at all, you've certainly caught wind about Meghan's family. Her father and half-sister Samantha Markle have gone out of their way to speak to the press about Meghan and have regularly accused her of being opportunistic and neglectful, among other horrible things. The public first learned about Meghan's strained relationship with her relatives around the time she and Prince Harry announced their engagement. It was clear then that she and Thomas Markle have somewhat of a complicated history. Prior to the royal wedding, Thomas Markle threw gasoline on that fire when he staged photos of himself preparing for Meghan's wedding for money.

Since then, it's been hellfire. Thomas Markle accused Meghan of "ghosting" him despite rumors suggesting Meghan has done nothing but ask him to stop speaking about her to the press so they can work on repairing their relationship. He also reportedly leaked a letter she allegedly hand wrote him in which she described the "unnecessary and unwarranted pain" his actions have caused. Today, royal expert Katie Nicholl wonders if Thomas is finally taking the hint.

"It's a correct observation, we haven't seen an interview from Thomas Markle, we haven't heard a word from him, which—given his tendency to speak to the press—is unusual," Nicholl explained to Cosmopolitan. "I'm sure it's been very welcomed at Kensington Palace."

Nicholl mused on what Thomas' motivation could be, explaining,

I do know from the inside that the interviews Thomas has given, the leaking of that letter to a newspaper written to him by his daughter was very hurtful to Meghan, it's been a very difficult time for her. And I was also told that way back, and after the royal wedding, Meghan did reach out to her father and said to him 'If you can just keep quiet, if you can stop using the press as a medium, prove to us that we can trust you can keep quiet,' then there was—as far as she was concerned—a chance of a rapprochement.

"She was prepared to give him a second chance," she added. "So yes, one wonders if perhaps he has learned the error of his ways and realized that if he wants any relationship with his daughter and his grandchild, he's going to have to prove that he can keep his mouth shut."

Innnteresting. Meghan is reportedly due to have her first baby any day now. It would make sense if she is also bracing herself for her father to pop back up around that time.