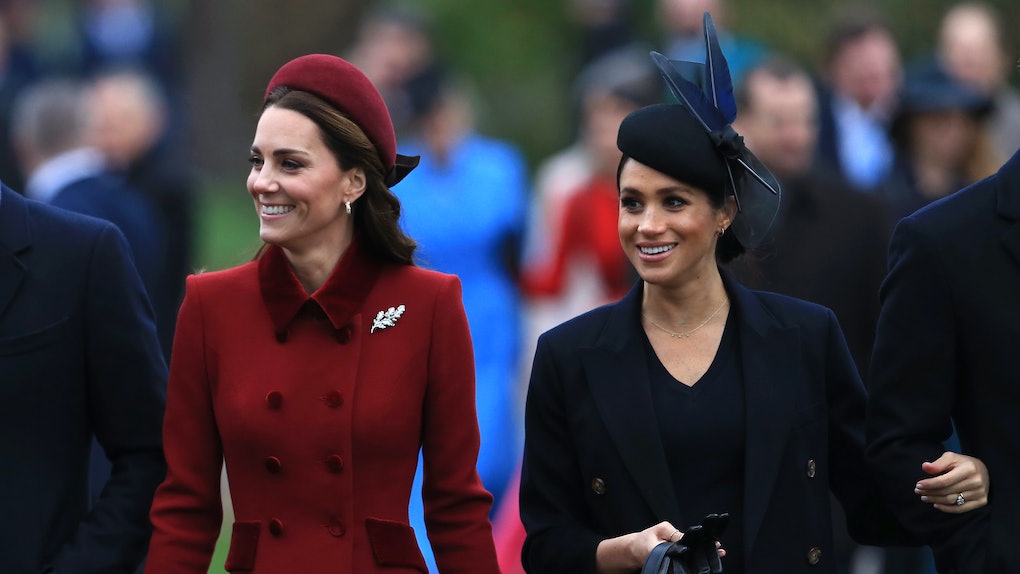 Meghan & Kate's Polo Match Outing Was "Orchestrated" For Press, According To A Royal Expert

Can Meghan and Kate ever catch a break in the press? Between the rumors that Kate Middleton was sparring with her "rural rival" and that Meghan Markle's employees can't stand her, it seems like there's always something bad to be said about these duchesses in tabloids. Now, a royal expert is saying that Meghan and Kate's polo match outing was "orchestrated" for the press. OK. Elite Daily reached out to Kensington and Buckingham Palace for comment on these remarks, but did not hear back by the time of publication.

Princes William and Harry took part in their annual polo match on July 10. Kate and Meghan, in a rare move, attended the match with their kids in tow. Yes, newborn Archie was there! And they were all dressed so casually! It literally looked like a picturesque family outing. Meghan and Kate both wore summery sundresses, and they chilled with the kids while Harry and Will played polo. Prince George and Princess Charlotte played soccer, Prince Louis was wearing sunglasses. Harry popped over to check on Meghan and Archie when he was done playing. It was all so pleasantly normal!

Royal biographer Duncan Larcombe, however, is saying the moment was staged to boost public perception of the families in the midst of all of the feud rumors surrounding them. (There were rumors that Meghan and Kate were feuding, rumors that Harry and Will were feuding, and even rumors that Will was cheating on Kate with that aforementioned "rural rival." It's been a lot.)

Speaking with Nine News Australia, Larcombe said that it all seemed hella staged when the show's host noted that it didn't seem like any kind of feuding was going on.

"Isn’t that what we’re supposed to think after today?" Larcombe said. "It was carefully orchestrated — there are always photographers at these polo matches."

"They all looked very happy today," he continued. "So it’s against the backdrop of the rift of course [...] I think that they might not be the best of buddies. But you’ve got to take a lot with a pinch of salt [...] I think they’ll be rather pleased with those pictures."

I mean, sure. I guess this could have been a planned photo op. But is it not also within the realm of possibility that the family thought it would be a two birds, one stone kind of situation? Maybe they wanted to go to the game, thinking it would be fun for the kids to see and, knowing photographers would be there, would be an easy and enjoyable way for them to say, "Look! There is literally nothing feud-like to see here!" I just don't buy the theory that this was only done for public image purposes. Why would Meghan and Harry use their newborn for that?

Plus, it looked like Harry and Will had a swell time playing polo. And like, isn't it just as believable that, like... they just wanted to be there to support like a normal family would? Could this not just have been a fun day?! Damn.

Before this, Harry, Meghan, William, and Kate were all together at Archie's christening on July 7. The christening was held in the Private Chapel at Windsor Castle, the same castle where Harry and Meghan got married in May 2018.

They all seem happy in those pictures too, which were literally staged because it was the christening of a member of the royal family. That ish happens all the time.

More like this
These Theories About Meghan & Harry's 2nd Baby's Name Are Positively Royal
By Michele Mendez
Prince Philip, The Duke of Edinburgh, Has Died At The Age Of 99
By Noelle Devoe
Meghan Markle & Prince Harry's Beef With The British Tabloids, Explained
By Brandy Robidoux
Stay up to date