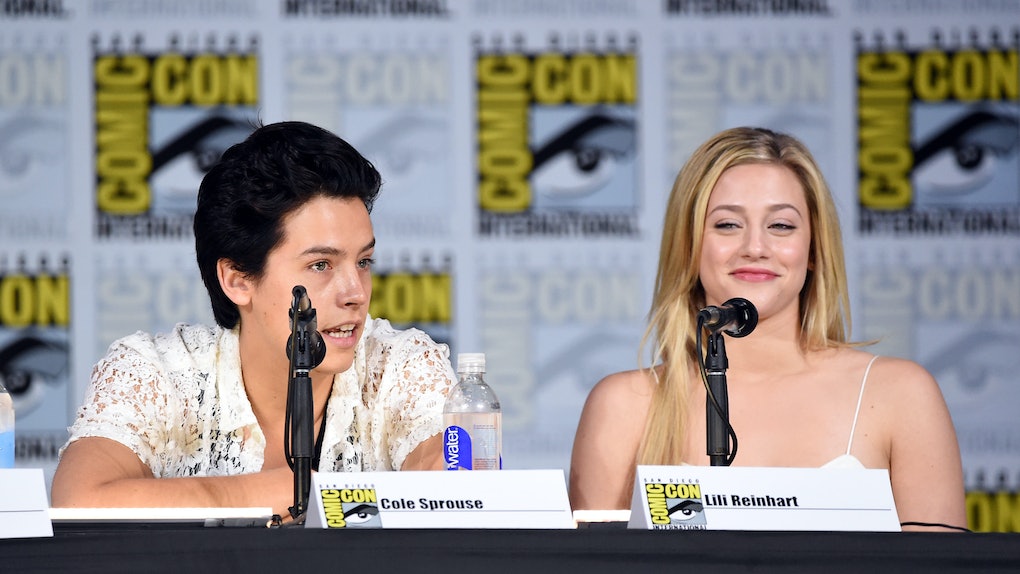 If you’re as addicted to Riverdale as I am (and of course you are, who isn’t?) then you're likely already well aware that rumors about Bughead (aka the couple name for Betty and Jughead) happening IRL are all over the place. Yep, our fave on-screen romance could be happening for real. While the couple still has yet to publicly confirm their relationship (which is totally their right), they can’t keep us from gleaning everything they are not saying, especially by taking a close look at Lili Reinhart and Cole Sprouse's body language, with the help of an expert in the field, of course

Before we dig into the fully analysis of Reinhart and Sprouse's body language, here's a brief history of the still-unconfirmed couple. The speculation about Bughead IRL began when the two of them were reportedly spotted kissing and cuddling at Comic-Con, according to People. This was followed by sightings of the two of them behaving like more than mere colleagues around the Riverdale shooting location in Vancouver. And early this month, the duo were spotted vacationing Hawaii together and showing some low-key PDA on the beach. Add that up, and there is some pretty solid evidence the two are really close, if not coupled up.

But since they still aren't talking, Elite Daily reached out to body language expert Patti Wood, author of Snap: Making the Most of First Impressions, Body Language, and Charisma, to get her take on what the pair's body language could reveal.

1. Sprouse Might Be More Comfortable Being Seen As A Pair In Public

In this first image above, Wood immediately zeroed in on both Sprouse and Reinhart's head tilts and the fact that Sprouse is leaning in while Reinhart leans away. Wood interprets this as an indication that Sprouse may be more comfortable with the two of them being seen as a pair in public than Reinhart is. "It's not a matching and mirror tilt," explains Wood. "If you look at [Reinhart's] face, the left side of the face doesn’t match the right side of the face. That lack of symmetry is saying the she’s uncomfortable."

2. Reinhart May Feel More Secure Being Affectionate In Private

Away from the photographers, Wood sees a more comfortable and secure side of Reinhart. Rather than pulling away in this image, Wood notes Reinhart "giving a little right shoulder to him to be closer to him." On the other hand, Sprouse's body language in this image reinforces his security in their relationship (whatever that may be). "If you look at the slight showing of the front teeth, the way his eyes are, that head tilt, and how his whole body is leaning in and giving her some weight and cuddled in at the shoulder point," says Wood, "[it shows] he’s absolutely serene and wants to be seen as connected."

3. Sprouse Seems Blissed Out With Reinhart

In the more candid shot above, we get an even clearer picture of the (reported) couple's dynamic — one in which Sprouse seems very happy. Wood's eye is immediately drawn to Sprouse's facial expression, how relaxed his body is. "He’s laying back and cradled by her and ... we see an even [bigger] state of bliss — a little bit more sexual bliss in him," says Wood. In turn, we also see a more relaxed Reinhart in this image: "She has her cheek against his cheek in this photo. She’s happy."

4. Regardless Of The Nature Of Their Relationship, They Have A Playful Dynamic

In the final series of images above, Wood also sees two people who have teasing, playful banter. She points out the back and forth of Sprouse making the power play of putting his elbow on Reinhart's shoulder and her subsequent playful response. "He’s really tied into how she responds to him ... and she’s plays this little power thing with him," says Wood. "It's all playful, but it [also says], 'I'm going to pull away and I’m going to act like I’m serene and fine without you.'" According to Wood, the fact that Sprouse's "mouth is doing a little bit of a sneer" in the final two pictures shows it could be a flirty little game.

Wood concludes that Sprouse "is happy and serene" in their relationship, while Reinhart could still be "making up her mind." Sounds like a little bit of a reverse of what we see on screen. While we won't ever know for sure how these two feel about each other (unless they tell us, of course), I can't wait to see what the (hopefully more public) future holds for Reinhart and Sprouse. In the meantime, Bughead forever!