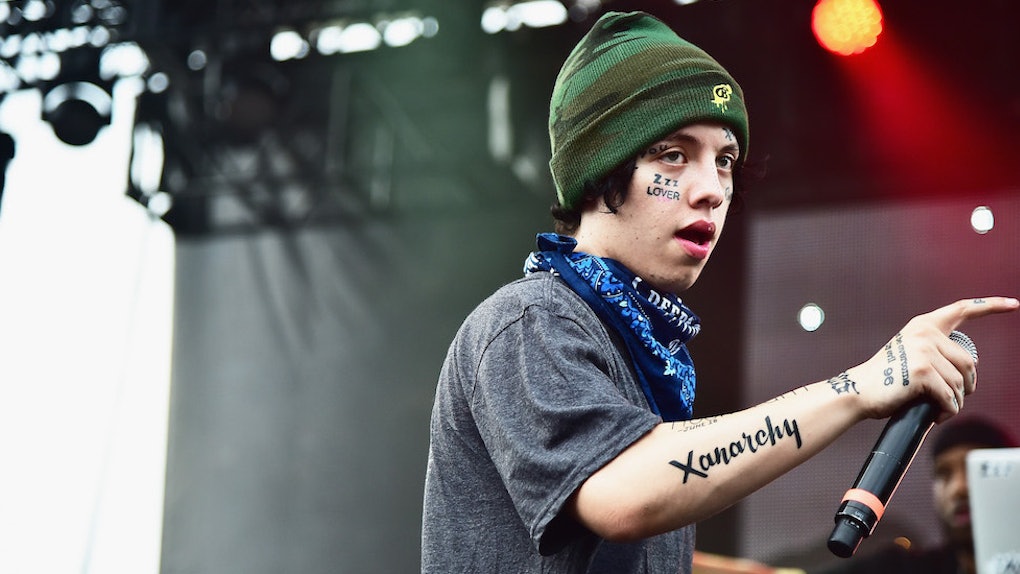 Just because his relationship with Noah Cyrus may be over, don't expect Lil Xan to fall back into obscurity. The young rapper has become one of the most prominent, tattooed faces of the Generation-Z Soundcloud rapper movement, and apparently, he is preparing to expand beyond music in the very near future. Lil Xan is working on a Netflix original series, according to his Instagram stories, so we might be seeing his tatted face on our TV or computer screens very soon.

To anyone who has an Instagram account, there is no arguing that Lil Xan is having a pretty massive moment right now. A few weeks back, the rapper and his then-girlfriend Noah Cyrus basically stole the show at the MTV Video Music Awards when photos of Lil Xan smooshing his face into Cryus' became an instant meme. Then just days later, the couple launched into an Instagram soap opera, accusing each other of being unfaithful, and then ending it all with a very public break-up. Now, fans are left to ponder whether Lil Xan and Noah Cyrus' new songs are about each other, and what really happened between the couple. At first it looked like Lil Xan freaked out when Cyrus sent him a Photoshopped photo of Charlie Puth, and then the rapper claimed that the whole relationship was set up by their label, Columbia, to increase publicity.

Well, whether that relationship was real or not, Lil Xan certainly has his fair share of publicity now, and he is apparently using his newfound spotlight to launch his own Netflix original series. Lil Xan took to Instagram stories on Tuesday night and revealed that he is currently filming an original series for Netflix, which he claims will be released at the beginning of 2019:

This claim stuck out in the midst of a litany of project that Lil Xan claims he is currently working on, including his international tour and an additional three albums, presumably referring to the number of albums agreed to in his contract with Columbia.

Less than a month ago, Lil Xan hinted at expanding beyond music in an interview with Billboard, saying: "I wanna be more of a pop public figure, iconic kinda dude." Perhaps this Netflix project is his next step in that direction.

Since this is all the information we have to go off of, it is unclear what Lil Xan's Netflix original series may be about, but since the rapper is currently on tour, it would make sense for this to be a docu-series following Lil Xan as he goes on the road on his first major concert tour. The series may also touch on his relationship with Noah Cyrus and what really caused it to come to such an abrupt end, which would definitely be a big draw for viewers. But for right now, all we really know about this purported series is that Lil Xan claimed that it is happening and is looking at an early 2019 release on Netflix.

More like this
What's Coming To Netflix In May 2021? Lots Of Action & Drama
By Ani Bundel
'Selena: The Series' Part 2: Netflix Release Date, Trailer, Cast, & More News
By Dylan Kickham
Colton Underwood Is Reportedly Making A Netflix Show After Coming Out As Gay
By Dylan Kickham
Stay up to date