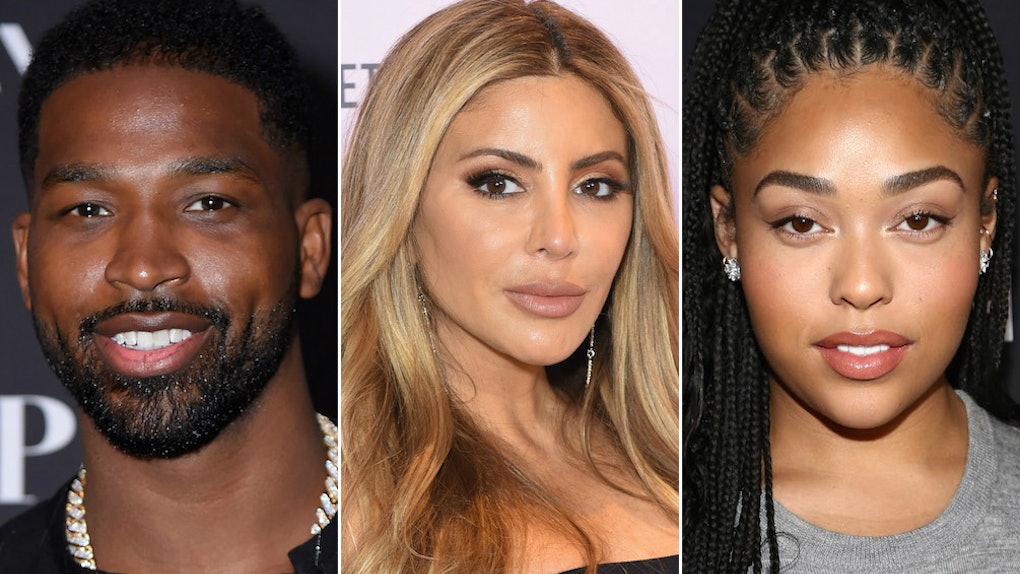 Larsa Pippen claims to have seen the Tristan and Jordyn drama coming. The 45-year-old close friend of the Kardashian family was called out by Kim Kardashian during the Keeping Up With The Kardashians Season 16 finale for talking publicly about Tristan Thompson's infidelity and Jordyn Woods' betrayal, and now she's speaking out again now that the dust has kind of settled on the whole affair. And Larsa Pippen's comments about Tristan and Jordyn hint that she felt there were signs that Thompson and Woods' hookup would eventually happen. Elite Daily reached out to Thompson and Woods' teams for comment on Pippen's remarks, but did not hear back by the time of publication.

In an interview on the Hollywood Unlocked podcast, Pippen said she sensed a questionable vibe between Thompson and Woods long before the scandal broke. She also noted that she was the one to break the news of their reported hookup to Kim Kardashian, which fans of the family now know to be true, as that phone call was documented on the KUWTK season finale in June.

“I called Kim. She didn’t believe me," Pippen said in the interview. "She was like, ‘No way. There’s no way.’ Then we called Kourtney and Kourtney was like, ‘Yeah, I believe it.'"

Pippen continued to say there were "other situations" between the two that made her and others feel uncomfortable before this scandal unearthed. Kourtney Kardashian was present for some of those moments, Pippen claimed.

“Because there were other situations where [Jordyn and Tristan] were in the same room together and it was like, a weird feeling. And Kourtney was in that room," she said.

While I don't doubt that the kiss between Thompson and Woods happened (Woods confirmed it in an interview on Red Table Talk), hindsight is 20/20. It's pretty easy to say that you saw drama coming after that drama has already panned out, so I'm taking Pippen's comments with a grain of salt. Kourtney Kardashian has not commented on Pippen's remarks.

Pippen was the one to break the news to the Kardashian family, though. During the first part of the two-part Season 16 finale of KUWTK, Kim was in the middle of doing solo interviews for the show when Pippen called to inform her that a report about Thompson and Woods was being published soon. When Thompson previously cheated on Khloé Kardashian when she was nine months pregnant, Kim also found out via a phone call during interview filming.

"I was getting ready for my interviews. Literally, the same thing as the first time," Kim said in the episode. "My friend, Larsa, called me to explain that a reporter that she knows was about to write a story that Jordyn and Tristan were at his home, late-night or until 7 in the morning. They said they were making out, and I immediately didn't believe it. I was like, 'This can't be true.'"

As we all well know, the reports were true. Woods told her side of the story to Jada Pinkett Smith on Red Table Talk. She claims Thompson did kiss, but it was as she was leaving his house early in the morning after a group of them had partied there the night before. She adamantly claimed that she did not have sex with him, but the kiss alone was enough for Khloé to dump Thompson for good. Woods' relationship with the Kardashians has been severed ever since, but Kylie Jenner did tearfully ask her older sisters not to bully her online during part two of the season finale.

In her interview with Hollywood Unlocked, Pippen didn't elaborate on what the "weird" moments were. She merely said they happened, and implied that those moments made the cheating scandal less surprising for her once it came out. The whole family has seemingly moved on now that the drama has been aired out on the show. Only time will tell if Kylie Jenner and Jordyn Woods will repair their friendship.