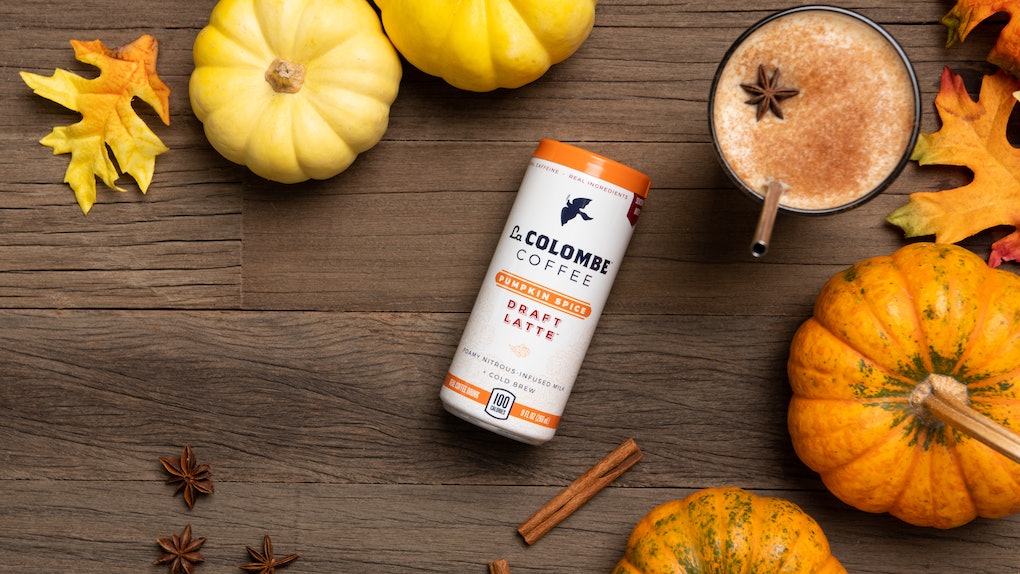 I know it's only August, but PSL season is upon us. Tons of cafes and coffee companies across the nation are already introducing pumpkin-flavored drinks, including La Colombe. However, La Colombe's version of the PSL isn't served in a cup with a mountain of billowy whipped cream. Instead, it's served in a can for ultimate on-the-go convenience. If you're hoping to add La Colombe's Pumpkin Spice Draft Latte to your daily routine, I'll give you the deets.

La Colombe officially introduced its Pumpkin Spice Draft Latte for fall 2019 on Thursday, Aug. 15, and it's now a limited-time addition to the company's beloved Draft Latte menu. The menu itself features canned lattes with different flavors, such as Caramel, Mocha, Vanilla, and more. The new pumpkin-inspired version brings an autumnal twist to the mix, complete with actual pumpkin puree. I'm not kidding: According to an email from La Colombe, the seasonal sip is made with "real pumpkin puree," natural spices, cold-pressed coffee, and 2% milk that's lactose-free.

La Colombe's canned PSL is the perfect grab-and-go drink if you don't have enough time in the morning to stop at your fave coffee spot. It'll provide the fall flavors that you love and the caffeine that you crave. I don't know about you, but I'm excited to give it a try (even in the midst of summer).

If you're also hoping to try La Colombe's Pumpkin Spice Draft Latte, you're probably wondering where you can buy it. Thankfully, the flavor is pretty accessible. According to an email from the coffee company, you can buy a 9-ounce can of the pumpkin-inspired latte for a suggested retail price of $2.99 at La Colombe's cafe locations. Apparently, you can also purchase it at various retailers across the nation such as Trader Joe's, Whole Foods, Carlisle, Harris Teeters, and Giant Landover.

If you don't feel like going to the store, you can buy the Pumpkin Spice Draft Latte on La Colombe's website. In order to do so, head to the company's webpage dedicated to the drink and scroll down until you see the "SHOP NOW" button. When you see that, click on it — and then, you'll be able to buy the flavor on the spot. According to the company's product page, a pack of four cans is going for $12. With that being said, stock up accordingly so you have 'em in your fridge whenever you're in need of a pumpkin-flavored pick-me-up

If you're hoping to add the festive flavor to your coffee collection, I wouldn't wait too long to make your purchases. According to La Colombe, the Pumpkin Spice Draft Latte will only be available for a limited time while supplies last. I'm hoping that it'll be around throughout the entire spooky season, but I guess that'll depend on how popular it is.

Believe it or not, La Colombe isn't the first company to unveil a pumpkin-flavored latte in the middle of August. Other companies such as 7-Eleven, Godiva, and Dunkin' have also announced PSLs of their own, and all of 'em sound equally delicious.