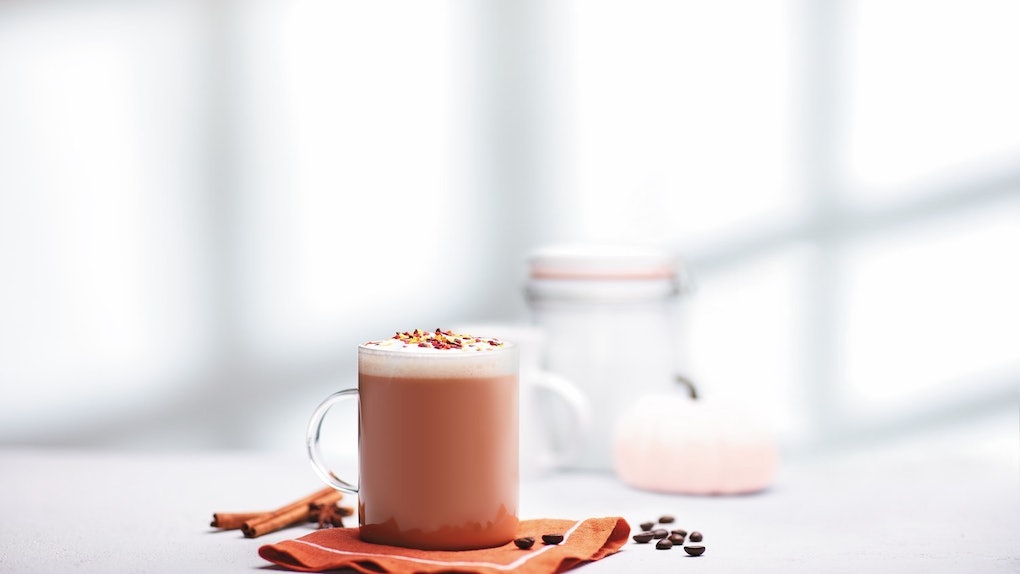 If you've never had 7-Eleven's Pumpkin Spice Latte before, now's the perfect time to try it. According to the company's press release, the caffeinated sip blends flavors of "autumn spices" with pumpkin, clove, anise, ginger, and cinnamon. You could even personalize it with chocolate sauce and leaf-shaped sprinkles. But if you'd rather opt for 7-Eleven's pumpkin-flavored coffee, you could mix it with pumpkin spice-flavored International Delight creamer at no charge.

Regardless of which option you choose, you'll be able to taste your fave fall flavors with every sip. Again, you won't have to wait to try these beverages, because both of 'em are currently available at participating 7-Eleven stores.

Now, let's get back to that $1 deal. It's true: If you visit your local participating 7-Eleven soon, you'll be able to buy a Pumpkin Spice Latte or pumpkin-flavored coffee for only $1. You don't have to worry about which size you choose, either, because the limited-time promotion is good for any size cup. Therefore, whether you're craving a small sip of pumpkin-flavored coffee or a large PSL, 7-Eleven has you covered.

Heck, even if you aren't craving anything pumpkin-flavored yet (understandable), you can partake in 7-Eleven's deal. According to the company's press release, you'll be able to get freshly brewed coffee of any size for $1, which means you aren't limited to the pumpkin flavor. The company also mentions "other hot beverages" in its announcement, which seems like you can score a latte for $1, too (even if it's not a PSL).

There's one more deal that I want to talk about (but you'll need your phone to make it happen). If you visit 7-Eleven on the reg, download the company's app and sign into its rewards program. Then, after you buy six cups of coffee, you'll get the seventh for free.

If you're excited about these autumnal flavors and cheap prices, you aren't the only one. Michelle Cram, the senior category manager for hot beverages at 7-Eleven, talked about the news in a press release. She said, "Pumpkin spice is our coffee customers' favorite flavored drink, and we didn't want to make them wait any longer." Cram continued,

With 7-Eleven's special dollar pricing, pumpkin spice-lovers can drink three – at morning, noon and night – for the same price they'd pay for just one latte at a coffeehouse or restaurant. And, after only six beverage purchases scanned on the 7-Eleven app, you can get a free one. That's a big bang for your beverage buck.

So, what are you waiting for? Head to your local 7-Eleven and buy a pumpkin-flavored coffee on the cheap.