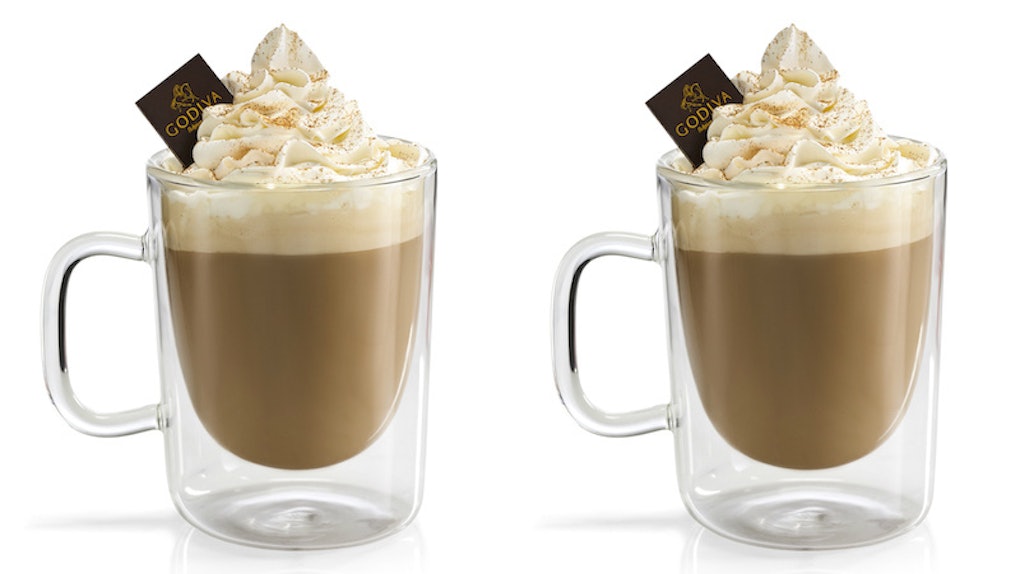 'Tis the season for pumpkin-flavored everything, y'all! (Well, I mean, it's almost the season.) Sure, the temps are still high and beach trips are being made on the reg. However, cafes across the nation are already introducing pumpkin spice drinks, which means autumn is coming early. Take Godiva, for example. The famous chocolate company recently announced not one, but two pumpkin-flavored coffee drinks. Of course, one of 'em is a PSL that seems delicious. If you want to try Godiva's new Pumpkin Spice Latte, I'll give you the deets.

Godiva's new Pumpkin Spice Latte, which was officially announced on Thursday, Aug. 15, is pretty similar to other PSLs that you might be familiar with (and it might even give 'em a run for their money). According to an email from the company, Godiva's version is made with a mixture of pumpkin spice, steamed milk, and the company's Signature Blend espresso. On top of that (literally), there's a layer of cinnamon-dusted whipped cream.

If you like other pumpkin-flavored lattes, go ahead and give it a try (the more, the merrier). But before you head to your local Godiva shop in pursuit of the drink, there are a few more things that you should keep in mind.

First, let's talk about where you'll be able to get Godiva's PSLs. According to an email from the company, you'll only be able to buy the pumpkin-flavored lattes at Godiva Café locations, which can be found here. Most of them are located in New York City, which gives you the perfect excuse to take a day trip to the Big Apple in pursuit of an autumn sip.

Before you start planning your Godiva getaway for a PSL, you'll probably want to know how much it'll cost. As you could imagine, the price will depend on which type of Pumpkin Spice Latte you order. According to the company, a 12-ounce hot latte will cost $4.45, and a 16-ounce hot latte will set you back $5.25. A 12-ounce iced latte, on the other hand, will cost $4.75, while a 16-ounce iced latte will come to $5.45. In other words, the iced versions of Godiva's PSL is a little bit pricier — but they might be worth ordering in the midst of summer.

Now that you know where to get Godiva's new Pumpkin Spice Latte (and how much it'll cost), let's talk about when you can buy it. According to the company, the PSL will be available at Godiva Café locations as of Sept. 3. However, it'll be taken off the menu on Nov. 1 (just in time for the holiday drinks to be introduced). So if you want to try Godiva's Pumpkin Spice Latte, find your nearest store and plan a visit.

While you're at the Godiva Café, you can try other sweets on the menu, such as the Godiva Croiffle and the Pumpkin Spice Chocolixir.

While you're waiting for Sept. 3 to come around, you can try other caffeinated pumpkin drinks at coffee spots such as 7-Eleven and Dunkin'. (Just keep in mind that Dunkin's pumpkin-inspired menu will become available on Aug. 21, per the company.) Like I said: The more PSLs, the better.