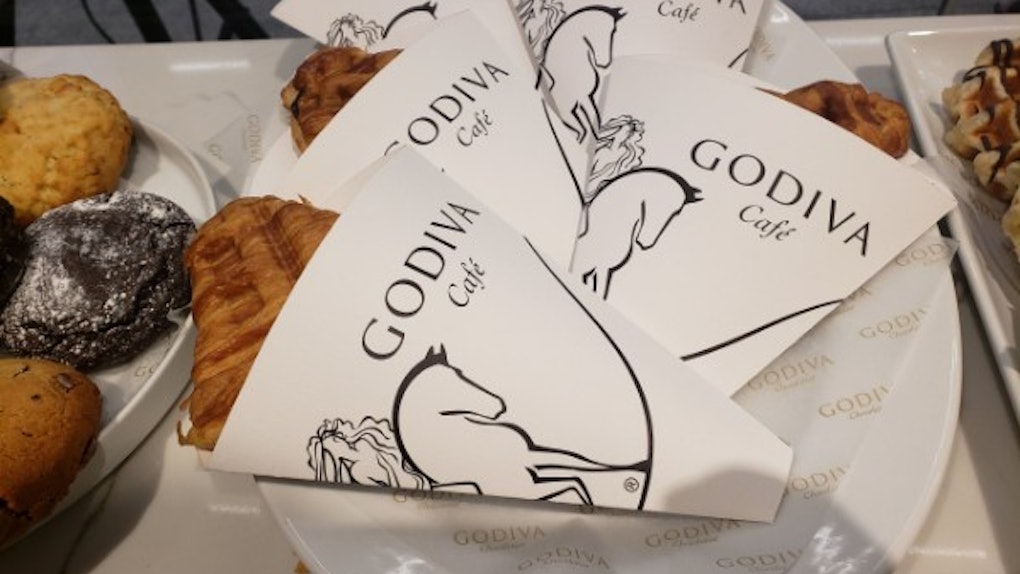 What Does The Godiva Croiffle Taste Like? You Can Choose Sweet Or Savory

First, there was Dominique Ansel's world renowned Cronut, and then came the super convenient Sushirrito. And if you haven't heard about the latest Instagrammable food hybrid on the market, it's widely known as the "Croiffle," which is a hybrid between a croissant and a waffle. I was lucky enough to try it for myself, so I can confidently say that it's totally out of this world. And if you're currently filled with FOMO, wondering what the Godiva Croiffle tastes like, it's basically a mix of sweet and savory flavors. If you somehow can't tell, I'm head-over-heels in love with it.

On Thursday, April 18, Godiva opened their very first café in the U.S., on Lexington Avenue in New York City, according to an email from the brand. It's a relatively large shop with a few tables and a counter to order, so you can choose to take your treats to go, or eat them inside. They serve a variety of specialty coffee beverages as well as pastries, candies, and chocolate strawberries. But most importantly, the high-end chocolate company serves Croiffles, and if you aren't sure what to expect, it's exactly what it sounds like. The Croiffle combines the qualities of a waffle with the flakiness of a croissant, and believe me when I say I don't have a raging sweet tooth — by any means — but it managed to tickle my fancy nonetheless.

I was able to try Godiva's famous Croiffle for myself, and it kind of reminded me of a warm, thick chocolate-filled croissant. The outside perfectly resembled a waffle, taste-wise and texture wise. It was somewhat sweet, doughy, and lined with square griddle marks. However, the inside of the pastry was flaky and less sweet, kind of like a croissant. It was filled with a warm, gooey dark chocolate that filled the crevices between each flaky layer on the inside of the pastry. Honestly, it was one of the greatest desserts I've had in a very long time. As someone who isn't big on sugar, it was definitely ideal.

Now, I chose the dark chocolate-filled Croiffle, but you could also go with a milk chocolate filling, if you're looking for something slightly sweeter. Or, you could go with the Three Cheese, which was essentially a fancy grilled cheese, including Gruyere, Havarti and Swiss. They also served other savory options such as the Ham & Swiss sandwich which is made with Black Forest Ham, and the Sausage, Egg, & Gruyere if you were going for more of a breakfast vibe. Each Croiffle goes for under $6, so if you ask me, they're totally the best option imaginable. TBH, the mere sight of them is making me drool.

Back in February 2019, Godiva opened a new concept store at Penn Station in Manhattan, where they initially debuted the famous Croiffle. There, you could also choose between the Dark Chocolate Croiffle or the Milk Chocolate Croiffle, if you were seeking out something sweet, or the Three Cheese Croiffle, the Ham & Swiss Croiffle, the Bacon, Egg & Gouda Croiffle, and the Sausage, Egg & Gruyere Croiffle, if you were going for something slightly more savory. Stop by either location, depending on what's more convenient for you.

I don't care what your plans are today — my advice is to get yourself a Croiffle. There's no going wrong with any of these amazing flavors, whether you're in the mood for something sweet or savory. Honestly, each of these delectable food hybrids hold the keys to my heart.