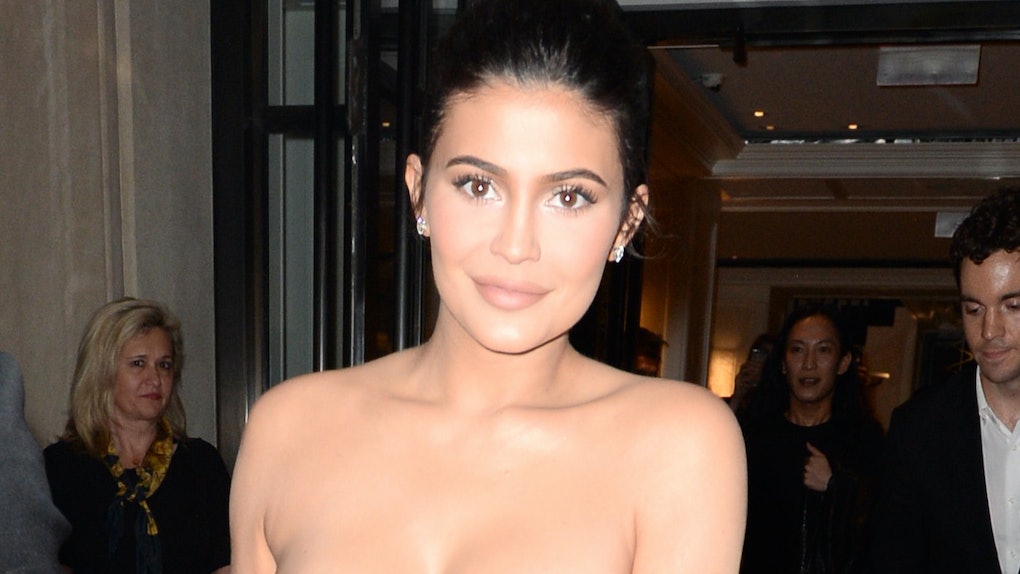 Do you guys even remember a world before Stormi Webster? Kylie Jenner and Travis Scott's little bundle of joy has been in our lives for just over a year, but everything is infinitely different now. I can practically hear millions of young moms writing "Stormi" on birth certificates as we speak. The cosmetic mogul has designed an entire cosmetics collection out of her sweet baby girl's name, not to mention it's just fierce AF. So, would you believe Kylie Jenner's original name idea for Stormi was something totally, totally different? Buckle in, because her first option was a hard left from "Stormi Webster."

In a rare open Q&A with her fans, Jenner hopped on Instagram Live to answer a few questions from her thirsty followers. E! News reports that while she was there, someone asked what other name ideas she had for her first babe. Understandably, Jenner mulled over the idea of not revealing her other options just in case she wanted to use them in the future, ultimately deciding to graciously let us in on one alternative name.

Are you ready for this? Stormi Webster was almost named Rose.

Jenner told her fans, "One name I will tell you guys, because I don't think I'm ever going to name my daughter this (another daughter), but I wanted to name her Rose." According to her, there was no real inspiration behind the classic name. She just simply liked it.

(Me being the conspiracy theory bish that I am was immediately like, "Wait, what about Amber Rose? Your family's longtime frenemy and Kanye West's ex? Like, the only other famous Rose I know besides Rose from Titanic, obviously?" But, whatever.) Jenner said, "Shout-out to everyone named 'Rose.'"

Jenner also teased she had a second name in mind, too, but she is still saving it just in case she wants to use it in the future. "It was a very weird name," she said, "but I love it. It just didn't work for her."

Jenner also said she considered shortening her daughter's name to "Storm" but wanted to add an "ie" to the end like her own name, Kylie. The decision to get rid of the "e" in that "ie" apparently came at the last minute when she was signing the birth certificate. "When I was pregnant, I used to call her 'Stormie' — when I would talk to her in my belly," Kylie explained. "It just always felt right."

Jenner added it felt like Stormi "chose her own name," stating, "I just couldn't imagine any other name other than Stormi."

Both Travis Scott and Jenner take credit for coming up with the fiery moniker, though Jenner insists it was truly her idea. She was inspired by nature and once revealed to YouTube star James Charles that "Willow" was also on the potential list. As for Stormi's last name, Webster, that belongs to her father. Travis Scott's given name is Jacques Berman Webster II.

I can't honestly say how I would have felt had I never heard the name "Stormi" before Rose, but I think they went with the most amazing choice! (No offense, Roses.)