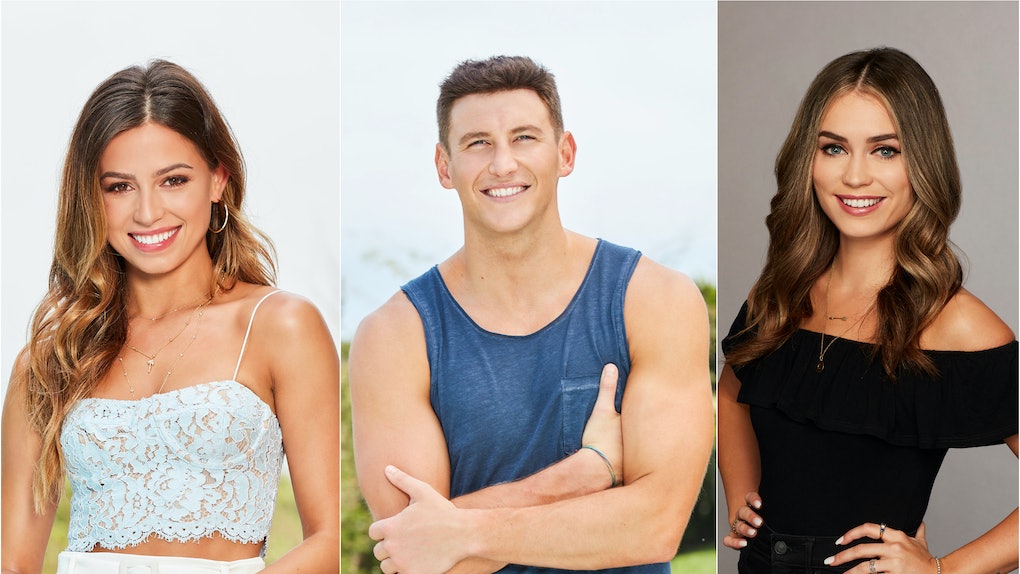 Bachelor in Paradise's Blake Horstmann probably didn't expect even more love triangles involving him to form this far into Season 6. Upon his arrival, Blake ran into trouble when both Caelynn Miller-Keyes and Kristina Schulman spilled about hooking up with him at the Stagecoach music festival, and things grew more complicated when Blake persisted in a love triangle with Hannah Godwin and Dylan Barbour. Now with that drama behind him, Kristina and Caitlin's fight about Blake on Bachelor in Paradise Week 3 proves he hasn't reached the end of his rocky road.

In case you missed it, Blake had flirted with Tayshia and hooked up with both Caelynn and Kristina on consecutive nights at the Stagecoach country music festival in April. Upon receiving the first date card in Paradise, he somewhat surprisingly asked out Tayshia, but both Caelynn and Kristina later confronted him about pursuing them one night apart. Blake then revealed that he had flown to Alabama to visit Hannah a week before Paradise began filming, leading to his active pursuit of Hannah, who was also drawn to Dylan.

By the end of Aug. 19's episode, Hannah had finally chosen Dylan over Blake, leaving the latter to mope around the beach until The Bachelor's Caitlin Clemmens arrived. No surprise, but Blake had also met Caitlin at Stagecoach, and while he insisted nothing happened between them there, she still asked him out on a date in Paradise. Having given Blake a rose the previous week (supposedly to toy with him), Kristina didn't seem too bothered by this, and Blake's explanation of his past shenanigans somehow didn't scare away Caitlin.

That mindset seemed to change in Aug. 20's episode, when Caitlin didn't appreciate Kristina talking privately to Blake. "I like Blake, I'm still curious about him," Caitlin told cameras. "[I] definitely want to show him that I'm still interested ... I just think it would be very difficult for me to progress anywhere with him with Kristina there."

Meanwhile, Kristina was still eyeing Blake for his rose. As she put it, she wasn't ashamed of receiving a "friendship rose," so when she had the chance to talk to Blake, she swooped in. "I just don't understand why he's giving her the time of day," Caitlin said. "I just think he's too nice. He knows my intentions here are genuine as they could be and I hope that's still resonating in his head.

Kristina dug for details about Caitlin from Blake, subtly reminding him that he was entitled to his own happy ending rather than going along with something he wasn't feeling. Across the beach, Caitlin was reeling.

"I've been here one day and I've realized this girl is literally atrocious," Caitlin said about Kristina to her newfound ally Caelynn, of all people. "She's manipulative as hell ... She just keeps stabbing her way in there."

Caitlin decided to confront Kristina about her feelings for Blake, saying, "It feels like there's something going on. I've heard lots about your past with Blake and I'm just wondering what the motive is here."

"Am I not allowed to talk to my friends?" Kristina said in response. "Why do you want to know where I stand? ... Why does that matter to you? What I do, and my actions, are none of my business."

When Caitlin could get a word in, she clapped back hard. "You're literally here chasing friendship roses instead of letting people find authentic relationships," she reminded Kristina. "You get very heated ... You're impossible! Women should always respect women!"

The confrontation ended with Caitlin rushing off to cry and Kristina seeming relatively unfazed. It's hard to believe Blake is totally immune to their clash, but as Bachelor Nation has seen, he hasn't been the smoothest about balancing his dalliances. Fans will have to wait and see if this new love triangle gets even more complicated.