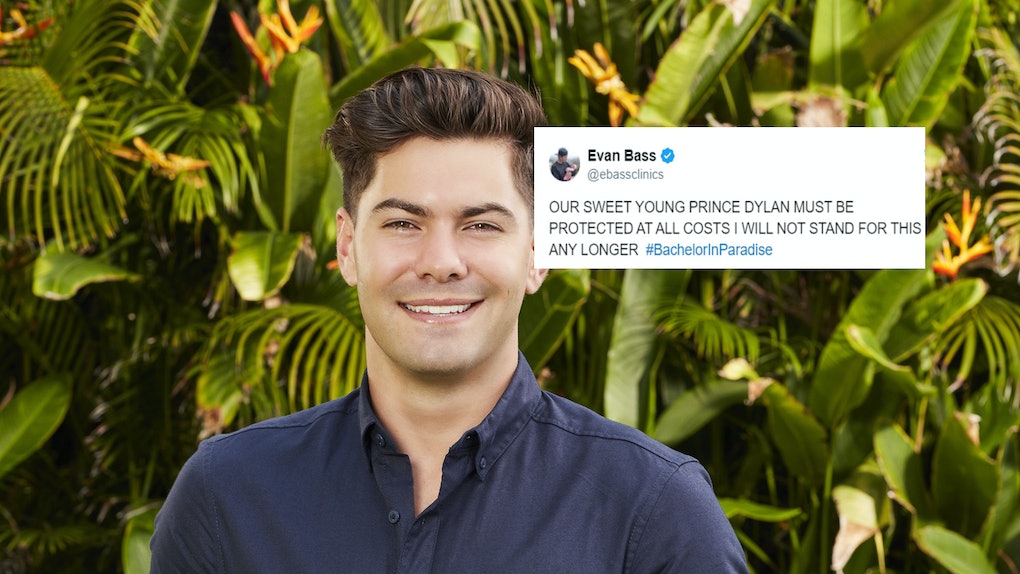 These Tweets About Dylan Crying On 'Bachelor In Paradise' Are So, So Supportive

Unless you had an eye for his unique facial expressions and taste in scarves, Bachelorette contestant Dylan Barbour flew under the radar on Hannah Brown's season. On Bachelor in Paradise, though, he quickly stepped into the spotlight when he fell for Hannah Godwin, who was felt torn between Dylan and Blake Horstmann. Her love triangle sent Dylan into tears on Week 3 of Paradise, and these tweets about Dylan crying on Bachelor in Paradise are super supportive about his underdog fight for Hannah G.

From Day 1 of Paradise, Hannah was drawn to Blake despite secrets about his womanizing antics at and around the Stagecoach music festival spilling out. While she wasn't involved in the festival flirting, she later revealed Blake had flown to Alabama prior to the show to meet her. Even after Blake came clean about his messy hookups, Hannah expressed interest in both him and Dylan.

"I will never not choose you," Dylan told Hannah over a picnic of gummy worms before Week 2's rose ceremony. "I will be there when you figure this out ... I want you to figure it out and I know we could be good. We could leave this together."

But Hannah proceeded to cuddle with Blake, prompting Dylan to freak out about whether he'd score a rose.

"She's putting me through so much sh*t," Dylan tearfully said later. "It's not fair ... I'm scared ... if she sends me home, I'm gonna be heartbroken."

The other Paradise cast members were on Dylan's side, disapproving of Hannah keeping the love triangle alive. On Twitter, support for Dylan also poured in, proving where Bachelor Nation stands in this debacle.

Dylan might have been panicking about his relationship, but it turns out his tears were for nothing. Hannah gave him her rose, seemingly confirming she would actively pursue Dylan rather than Blake. "I really appreciate how patient and understanding you've been," she told Dylan before giving him the flower. Who wants to bet the cast popped some celebratory champagne after this rose ceremony?

Although Kristina killed the mood by giving Blake her rose at the end of the ceremony, Bachelor fans were still on board for Hannah's second chance with Dylan. Even if Hannah ends up breaking his heart, at least Dylan has Mike Johnson's support at the end of the day.

Of course, there are still some viewers who would've rather seen Dylan turn down Hannah if she wasn't going to give him the time he deserves.

On the other hand, love is never a smooth road, so here's to watching Hannah give her connection with Dylan her all. She might have a lot to make up to him, but something tells me that Dylan is more than happy to stick around for her steps toward improvement. Plus, if things don't work, Bachelor Nation is here to support Dylan no matter what.