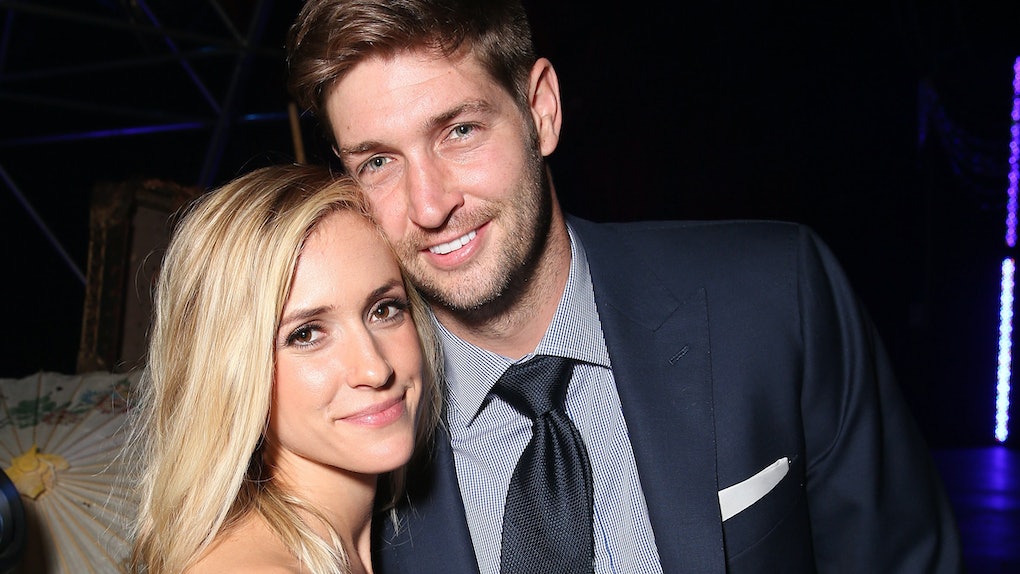 It's a very sad time for Very Cavallari fans, because — after seven years of marriage and nearly a decade together — Kristin Cavallari and Jay Cutler have decided to go their separate ways. The third season of the longtime couple's E! reality series (which primarily revolves around the operation of Cavallari's jewelry line, Uncommon James) has been filled with drama, so I can't say the divorce announcement comes as a huge surprise. But then again, the couple has been through a lot together, and based on Kristin Cavallari and Jay Cutler's relationship history, I thought these two might be in it for the long haul.

Even before Very Cavallari's bumpy third season, there were signs that things weren't exactly A-OK for the reality TV star and her retired NFL hubby. During a season two episode of the series, Cavallari confessed to friends that her marriage had lots of "ups and downs." She explained, "From the outside, like, things are so perfect and things are so great. But actually, like, they're not." In another episode, she opened up about how Cutler's leaving the NFL put a strain on their relationship. In case you need a refresher, here are all the ups and downs of their 10-year romance.

Though Giuliana Rancic claimed to Us Weekly in 2011 that she was the one to set up Cavallari and Cutler, the Laguna Beach alum told a different story during a 2013 appearance on the web series A Drink With. According to Cavallari, her publicist first contacted her about Cutler in 2009, saying the Chicago Bears QB wanted to fly her out to Chicago for a date. As she was filming The Hills at the time, she passed.

Then, a year later, she ended up going to a Chicago Bears preseason game, having totally forgotten about Cutler's invitation. The two ended up finally meeting and the attraction was instantaneous. As Cavallari later wrote in her 2016 book, Balancing in Heels, "We hung out two nights later, and that began a swift and intense romance. I flew back to Chicago at least every two weeks. When we were apart, we texted constantly, and he wrote me the sweetest love emails. He was the strong, manly man I wanted but had a sweet, romantic side as well."

They Made Their Red Carpet Debut In March 2011

In March 2011, the couple stepped out on the red carpet together at the premiere of Source Code in Los Angeles, leaving no doubt about their relationship status.

They Got Engaged In April 2011

Just a month after their red carpet debut (and about eight months after meeting), Cutler proposed over Easter weekend while he and Cavallari were vacationing in Mexico. According to a source for People, the NFL star planned the surprise trip to Cabo San Lucas in order to pop the question.

Soon after the engagement, Cavallari told People that "the proposal felt like it was a long time coming." She added, "I think we both knew from the moment we met that we wanted to marry each other. It's been a great situation."

Less than three months later, while in the midst of planning their spring 2012 wedding, Cutler reportedly called off the engagement. Us Weekly claimed that Cavallari was "blindsided" by the decision, but the reality TV star later said in her 2016 book that she was the one to end things. "A few things needed to change, and I knew the only way Jay would see how serious I was, was if I ended the relationship," she wrote.

Soon after the news broke, Cutler took to Facebook to call off the haters. "Thank you all for the support," he wrote in a post, "but if you talk bad about Kristin I will delete and block you."

They Got Back Together In November 2011

Reconciliation rumors started in October of that year, when Cutler was spotted in the audience watching Cavallari perform on Dancing With the Stars. By November, the couple confirmed that their relationship and their engagement were back on, with Cavallari tweeting, "This time its official..Jay and I are engaged again :)."

In 2013, Cavallari told E! News how Cutler proposed the second time, and it was just a little bit different than the first proposal. "It was so silly," she said. "I was in the airport, leaving Chicago. We had just spent however many days together, and we were texting and somehow it came up, like, 'Oh, shall we get married?' We're like, 'Yeah, OK.' And then he sent my ring in the mail. So I actually had my ring sitting at home for a couple of weeks before I put it on."

They Welcomed Their First Child In August 2012

Two months after announcing they were back together, Cavallari and Cutler made another big announcement: They were expecting. In a January 2012 statement for People, the couple said, "We are thrilled to announce we are expecting our first child together. It's an amazing time in our life and we can't wait to meet the new addition to our growing family."

Camden Jack was born on Aug. 8, 2012, and Cavallari shared the news on Twitter. "We are thrilled to welcome Camden Jack Cutler into the world," she wrote. "He was born this morning weighing 7lbs 9oz. Everyone is doing great!"

Over two years after their initial engagement, Cavallari and Cutler finally tied the knot on June 7, 2013 in a civil ceremony. The next day, they had another ceremony at the Woodmont Christian Church in Nashville and, later, they celebrated with 150 of their friends and family at Houston Station. The reception included ribs, biscuits, and a five-piece Motown band.

"We were both just like, 'I can't believe we did it!’" she told People following the big day. "Especially Jay, because he's never worn a ring before. It's going to take some getting used to." The pair later spent two weeks in Italy for their honeymoon. "Just had the most amazing 2 weeks in Italy!" Cavallari tweeted after the trip. "My jeans are tight so u know it was a success ha."

They Welcomed Their Second Child In May 2014

Not long after their 2013 nuptials, Cavallari took to Twitter to announce that Baby #2 was on the way. "Thank you for all the love!!" she wrote. "We are so excited for Camden to be a big brother!"

They welcomed Jaxon Wyatt on May 7, 2014, and Cavallari shared the news on Instagram. Alongside a picture of suede baby booties and a hat, she wrote, "Welcome Jaxon Wyatt Cutler. 7lbs 11oz 5/7/14."

They Welcomed Their Third Child In November 2015

Just about a year after Jaxon was born, Cavallari and Cutler announced that a fifth member would be joining the family. On Mother's Day, Cavallari posted a pic of her and her two sons on IG, calling it her "announcement pic for baby #3."

Cavallari and Culter's first daughter, Saylor James, joined the world on Nov. 23, 2015. Soon before Saylor's birth, Cavallari revealed to Parents magazine that she and Cutler regularly attended therapy sessions together, and she felt that counseling made their bond stronger. "I'm not ashamed to say that Jay and I consistently go to therapy, because it's been extremely beneficial for our relationship," she said.

They Decided To Move To Nashville In March 2017

After eight seasons with the Chicago Bears, Cutler was released from the team following a rough 2016 season. Two months later, Cutler officially announced his retirement from football in order to become an NFL commentator for Fox Sports.

As nothing was keeping them in Chicago any longer, Cavallari and Cutler decided to relocate to Nashville, where they had gotten married and where Cutler had played college football for Vanderbilt University. On Instagram, Cavallari bid farewell to Chicago, writing, "Thanks for all the good times, Chicago. This will always be a special place for us."

Cutler Moved To Miami In August 2017

Just a few months after moving to Nashville, Cutler had another major career change. Miami Dolphins QB Ryan Tannehill had suffered a season-ending injury, and his spot was offered to Cutler. With his wife's blessing, Cutler signed a one-season contract with the Dolphins — though rather than joining him in Miami, Cavallari decided to stay in Nashville rather than uproot their kids again.

"So, I'm a single parent for the next five months," Cavallari joked to Entertainment Tonight's Katie Krause during a Facebook Live interview. "It's a little chaotic, but in the best way." She also posted about the news on IG, writing, "And he's off...but this time as a dolphin. so excited for my man on this next journey."

They Launched Their Reality TV Show In July 2018

Following his season with the Dolphins, Cutler announced his second and final retirement from the NFL and joined his clan in Nashville. That summer, the couple's reality series, Very Cavallari, debuted on E!, which chronicles Cavallari life as an entrepreneur, wife, and mama of three. Though fans were already well acquainted with Cavallari thanks to Laguna Beach and The Hills, Cutler quickly won over audiences as well.

"Coming from the football world where people didn't get his personality, it's been really nice for me and him [to have fans] appreciate him and see the real side of Jay," Cavallari explained to People in Nov. 2018. "He's been having fun with the show. Now that he sees he had a really positive reaction, he's been having a good time with it."

Things seemed to be going well for the duo until Jan. 2020, when cheating rumors between Cutler and Cavallari's friend, Kelly Henderson, surfaced. Henderson had been a staple on Very Cavallari in its first two seasons, but following the rumors, she was conspicuously absent from the show's third season.

Cavallari tackled the rumored affair head-on during an episode of the series, saying that — while she didn't believe the rumors — she wasn't happy with the way Henderson handled them. "I kept trying to reach out to her and talk to her about it and tell her how I was feeling, and instead of her just owning her side of it and being like, 'I'm sorry. Oh my god, that was never my intention,' or whatever, she kept giving me pushback and would get really defensive," Cavallari explained. "And then she literally just stopped responding to me."

They Announced Their Decision To Divorce In April 2020

A little more than three months after refuting the infidelity rumors, Cavallari broke the news on IG that she and Cutler had decided to split, claiming they were simply "growing apart." In her post, she wrote, "With great sadness, after 10 years together we have come to a loving conclusion to get a divorce. We have nothing but love and respect for one another and are deeply grateful for the years shared, memories made, and the children we are so proud of." Cutler shared a post on his own Instagram with the same caption.

Though the breakup initially seemed amicable, it was quickly made clear that the situation was probably more complicated than two people "growing apart." According to court documents obtained by Us Weekly, Cavallari cited "inappropriate marital conduct" and "irreconcilable differences" as reasons behind her divorce, and she also requested full custody of their three kids.

No matter what is decided, here's hoping that Cavallari and Cutler will do whatever is best for Camden, Jaxon, and Saylor and, eventually, find a way to heal on their own.