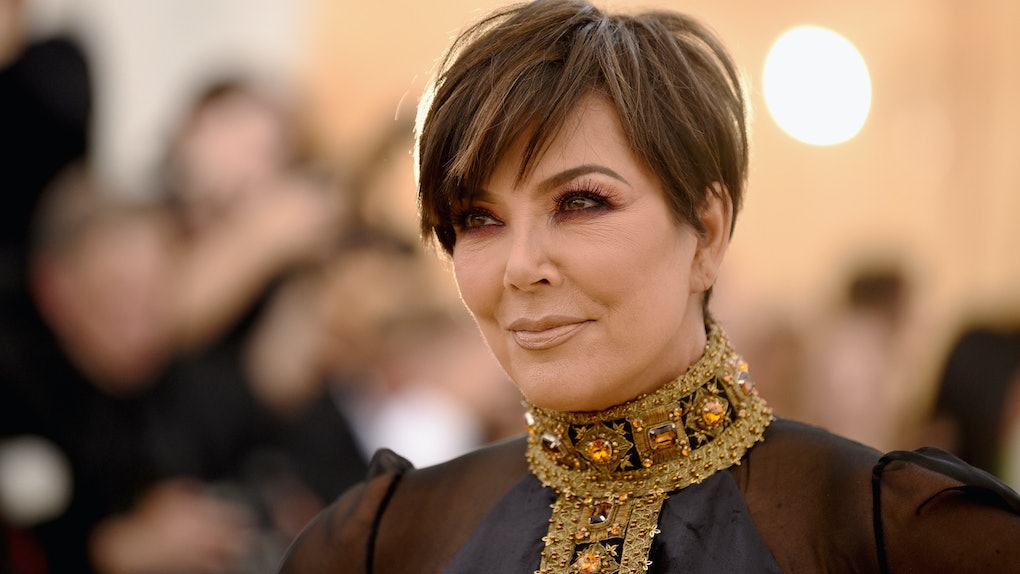 Just when I thought I was most excited for her daughters' Met Gala looks, leave it to momager extraordinaire to absolutely blow me away. ICYMI, Kris Jenner's 2019 Met Gala hair was the bold bleach blonde bob I didn't know I needed, and I couldn't be more thrilled about how fab she looked on the Met steps. The devil works hard, but Kris Jenner works harder, and apparently, designer Tommy Hilfiger works the hardest of all.

Given that this year's Met Gala theme, "Camp: Notes on Fashion," clearly calls for some extra AF outfits, there's no doubt in my mind that lots of celebs will be wearing some pretty uncomfortable outfits. But style queen Kris Jenner knows better, obvi, so she decided to wow us all with an ornate, campy opera coat over a chic jumpsuit that not only looked incredible, but was ideal for walking up the Met steps, natch. In her on-carpet interview with E! News, she gave this sage advice to other attendees: "Wear pants, because I'm so comfortable!" It's not like Kris to share her secrets to success, so you better take notes, people.

Claiming to have been inspired by icon David Bowie, Jenner says her look is exactly "How I dressed all through the 80s":

OMG, this is some major Barbie realness, people. Like, I can't stop looking at it. The bejewled stars, ruffled, glitzy opera coat, the structured shoulders, and the royal blue eye are all so damn camp. And of course, that blonde bob is everything and more.

While Hilfiger dreamed up the ensemble, it was Jenner's daughter, Kylie, who made the decision for her to rock a blonde wig. "Kylie decided that I should be blonde," said Kris during her on-carpet interview with E! News. She claims the decision came just a few hours before she hit the carpet, and that Kylie insisted there would be "no dark hair" tonight. It really does amp up the outfit's campy vibes, so this was a good call on Kylie's part.

Side note, boyfriend Corey Gamble's suit even featured a royal blue pussy boy and star-shaped buttons to match his lady's look. My heart:

TBH, this might be the first time I've ever seen Kris Jenner in navy. She's a head-to-toe monochromatic black ensemble kind of gal, you know? So even though she didn't rock a hot pink gown like so many other attendees, the slight change in color palette still feels pretty major.

This picture just shouted, "You're doing amazing, sweetie!" at me:

Kris, if you're reading this, you're doing amazing, sweetie. Seriously. This is also the second time she's attended a Met Gala and absolutely nailed the theme, and for that consistency, I applaud her twice over.

Her dark pope look last year was perfectly on-brand for the 2018 Christianity theme, in case you forgot: