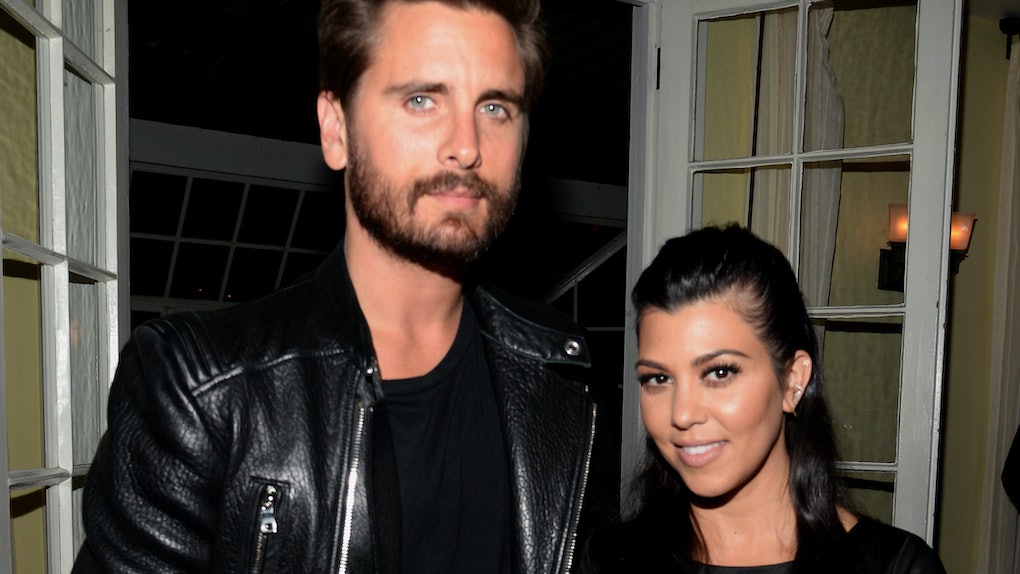 Kourtney Kardashian's Conversation About Scott Disick & Soulmates Is So Intense

Scott Disick and Kourtney Kardashian may have called it quits on their relationship in July 2015, but the two are very much still in each other's lives. Since their split, they've gone on vacations together as a family (significant others and all), they've celebrated holidays together, and they've healthily co-parented their three children, Penelope, Mason, and Reign. Most recently, the Kardashians visited a healer in Bali who may have dug up buried feelings Kourtney might still have for Scott. Kourtney Kardashian's conversation about Scott Disick and soulmates with her healer might be a sign that there's still hope for all the Kourtney-Scott shippers out there.

In an exclusive clip from the next episode of Keeping Up With The Kardashians, Kourtney revealed that her Bali healing session took an emotional turn when the healer brought up her relationship with Scott. "Scott came in, and the guy was basically saying that in a past life that we were together, and that we're soulmates," Kourtney told her sisters in the clip. "So, he was like, 'You have to decide if you want to be together or not be together,'" she explained. While Kourtney didn't outright say she agreed with the healer, she just smiled when she told her sisters what he said. And since she didn't deny it, it's possible that a part of Kourtney still believes she and Scott are meant to be together. *Cue the screaming Kourtney-Scott fans.*

According to Cosmopolitan, Kourtney, Kim, and Khloé visited the world-renowned healer a few months ago. "People from the States fly to Bali to see this man," Khloé explained. They went into the session, excited to connect "with the spirit world," but things got a little weird when the healer sensed some negative energy coming from Khloé's left knee. In order to remove the negativity, the healer got a straw, put it on her kneecap, and sucked for several minutes. Totally normal stuff, you guys!

While Kim had a less strange experience — the healer just asked her for a piece of her hair, which she then had to tell him was fake — neither one of them really got the emotional insight they were looking for. "I'm surprised from Kourtney's recap, because Kim and I literally got nothing emotionally from our reading," Khloé said. "They didn't even want that! We wanted it and we didn't even get that." So, while those Kardashian sisters didn't exactly get what they wanted, their trip to the Bali healer may have opened the door for Kourtney and Scott to rekindle their love one day.

Kourtney and Scott have definitely had their fair share of ups and downs since they first met in 2006 and started dating right after, according to Cosmopolitan. They've broken up twice, had three kids together, dealt with losing both of Scott's parents, multiple rehab stints for Scott's drinking, and both Scott and Kourtney moving on with other people. But the thing about soulmates is, you go through all of that and you still end up together in the end. So, whether the Bali healer was right about Kourtney and Scott or not is still TBD. I guess we'll just have to wait and see.