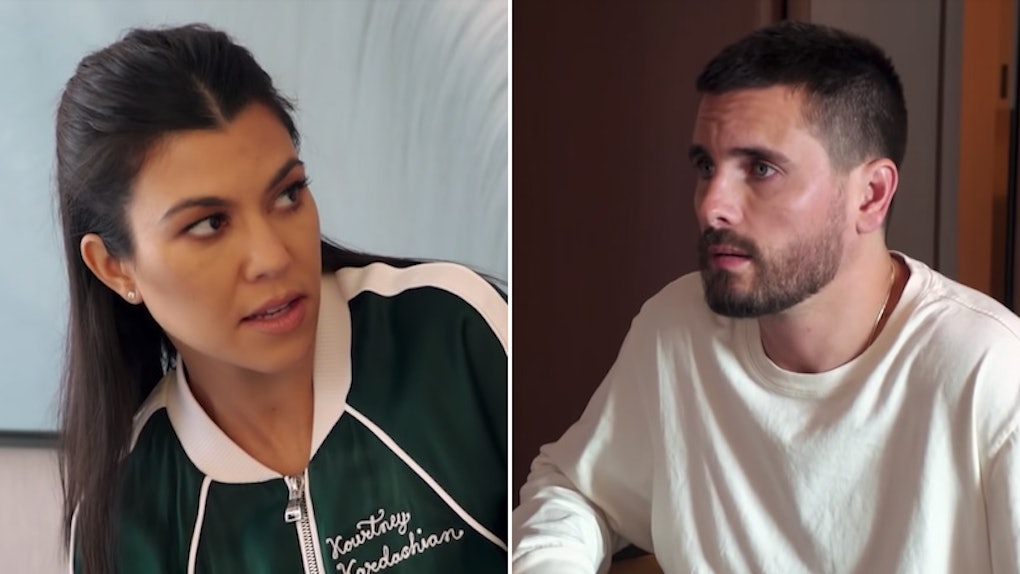 I don't want to say I'm rooting for Scott Disick and Kourtney Kardashian after everything they've been through. I'm just going to say I wouldn't hate it if they resolved all of their years of deep, traumatic drama and grew closer and stronger for it. Today, Disick is in a happy relationship with Sofia Richie and Kourt is doing the dating thing when and how she wants, but it's clear the two have found a solid groove. The video of Kourtney Kardashian and Scott Disick debating vacationing together in the most recent Keeping Up With The Kardashian teaser video is deep but also super mature, which can only be a good thing.

Making the longest of stories short: Kourtney and Scott spent a tumultuous decade breaking up and getting back together before officially calling it quits around the end of 2016/early 2017. Things took a particular turn for the worse when Disick first hid a girl in his hotel room during a family trip in Dubai, then shortly after invited another woman along to a family trip in Costa Rica.

KUWTK fans might remember the scene when Kim busts into Disick's hotel bathroom in Dubai, calling the woman hiding there a "groupie" among other choice words and instructing her to "get your sh*t" so security could escort her out.

Still, today he's happily in his first steady, long-term relationship since Kourtney with 20-year-old Sofia Richie. Over the course of her relationship with Disick, many media outlets have reported that Kourtney actually likes Richie and that they've all found some sort of way to coexist peacefully. So, when the topic of inviting Disick to a family vacation in Bali pops up in the upcoming Season 16 episode of KUWTK, Kourt has to think about it.

She and Disick sit down to talk it over, and what ensues is one of the most mature conversations I think I've seen these two have in a long time. Kourtney brings up Costa Rica, which Disick readily admits was not his finest hour. "I mean, I don't think I was in the best place but I feel like you and I also weren't in the best place," he started. "You were, ya know, living your life the way you should be and I just wasn't ready to handle it."

From there, Disick brought up the personal progress he's made and reflected on the past year of making consistently better, more level-headed decisions. He explained, "I feel like the biggest thing that you and I have always talked about that you wanted from me, if there was anything, was just to see me consistent with you and my family." He continued,

And, ya know. It's been over a year of consistency and I feel like we're good. Our parenting's been better. The kids are better. We've always said that we were gonna try to be family. Obviously, it didn't work out perfect, but, this is as close as we can get.

In the end, they decide to make the Bali trip together. Kourtney explains to cameras that "it's really nice to see how much Scott has grown and how much like he's invested in really being a great dad to the kids."

In true Disick form, they end the conversation on a light note. Kourtney explains she doesn't ever want to give Disick "mixed messages" to which he quips, "You barely give a regular message."