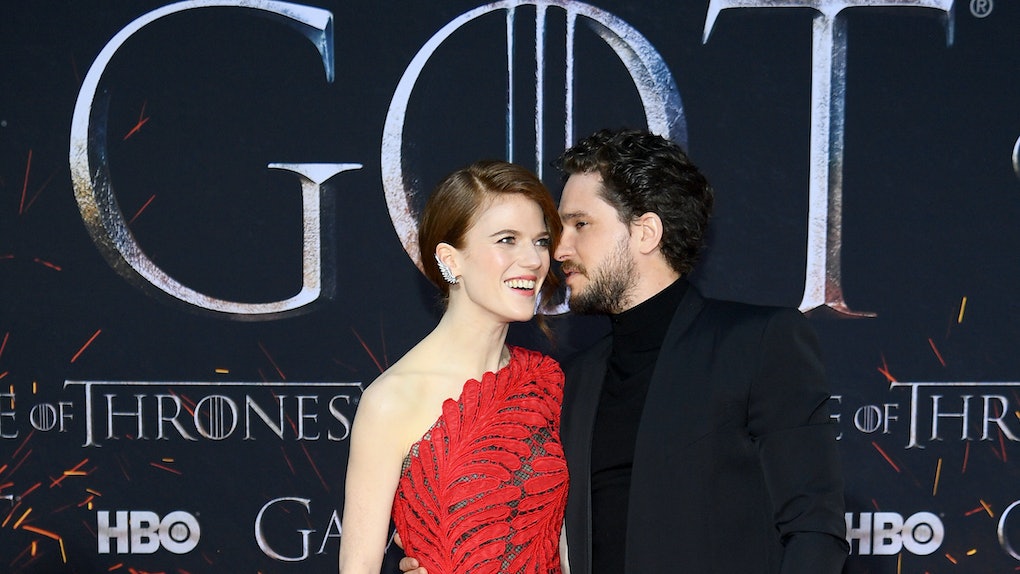 Unless you've totally missed the Game of Thrones train, you probably know that Kit Harington, who plays Jon Snow, and Rose Leslie, who played Ygritte, are married IRL. I know, I know, it's the stuff dreams are made of. Every time TV couples actually fall in love, an angel is born. (OK, maybe not, but you know what I mean.) At the New York City premiere of Game of Thrones' eighth and final season on April 3, the entire cast came out to slay on the red carpet. But Kit Harrington and Rose Leslie's body language really stole the show, making them my newest celebrity couple obsession. I spoke to three body language experts, and they all agree that these newlyweds are beyond close and incredibly happy.

According to Cosmopolitan, Harington and Leslie were reportedly friends before they starred on GoT together. Rumors that the two were more than just friends and co-stars started circulating in 2012, but according to E!, by the following year, the two had split. In 2015, they were spotted holding hands by a fan, and eight months later, Harington and Leslie made their first official appearance together at the Olivier Awards in London. A little over a year later, in June 2017, Harington told The Late Late Show that the two were living together, and in September 2017, they announced their engagement. Harington and Leslie tied the knot in June 2018, and it was quite the GoT family affair. The couple has always been very affectionate, and the Season 8 premiere was no different.

"They're very close and intimate," body language expert Susan Constantine tells Elite Daily. "They share some intimate, special moments, they never leave each other, they're always connected at the hip, her toes pointed toward him show strong connection." See what she means, below.

Here, they lean into each other and mirror their poses.

If you look at the way their bodies are positioned, you may notice that they seem to be mirroring each other. They both have their outer arms down by their side, their stances are toward each other, and they're both leaning into one another. "They’re having a good moment here," Traci Brown, body language expert and author of Persuasion Point: Body Language and Speech for Influence, tells Elite Daily. "Strong couples match each other’s mannerisms and while they’re both together, they’re both distracted and looking somewhere else. This appears to be an imperfectly perfect couples' moment."

Not to mention, Leslie's face shows pure joy in this particular moment, and I cannot deal. "The big smile on Rose’s face speaks to her happiness in sharing a quiet moment with her man on the red carpet," body language expert Blanca Cobb tells Elite Daily. "Kit’s hand around Rose’s waist signals that he’s bringing her close. Even in the posed photo, they have their bodies angled toward each other. Where the heart leads the body follows."

Their similar faces are an indication of closeness.

In the first picture, Harington was leaning into Leslie sideways, and in this one, he's shifted his weight on his back leg, allowing himself to get even closer to her, Cobb says. "Even with the serious looks on their faces, the similar expressions indicate that these two are emotionally in sync," she continues. "You tend to subconsciously mirror your partner’s nonverbal signs when you’re emotionally connected."

While Leslie's body language is also exhibiting closeness in certain ways — the way her toes are pointed toward him and her hip is pressed to his side — she's also showing off for the camera, Constantine points out. "There is that real sense of closeness and intimacy that they have, but she's very much conscious of how she's being presented," she says. "She's really exhibiting her appearance, although she doesn't leave him, which is a good thing. So, even though she's showing off her dress and displaying, she's still staying close and connected with him."

In this shot, Leslie is tilting her head away from Harington, and Harington looks a little caught off-guard. "The red carpet appearance seems to have gone from OK to kind of distant in a hurry," Brown says. Maybe the premiere was starting or they were just caught in between poses, but we can still see closeness in this shot. "That's like kind of whimsical, vulnerable, kind of gesturing," Constantine says of Leslie tilting away. "Any time you're showing the neck, that's a very sensitive, intimate area."

Despite the awkward neck tilt, the rest of Leslie's body language shows that she's beyond comfortable with Harington. "Her arm at the side of all of those, she feels very comfortable," Constantine continues. "Any time you ever see that, she doesn't have the hands on the hip to where she's showing power or dominance, she's really more whimsical and feminine and lady-like."

While I can no longer root for Jon Snow and Ygritte on GoT (thanks, Olly), I can root for them IRL. Here's to Harington and Leslie. Here's hoping their watch never ends.