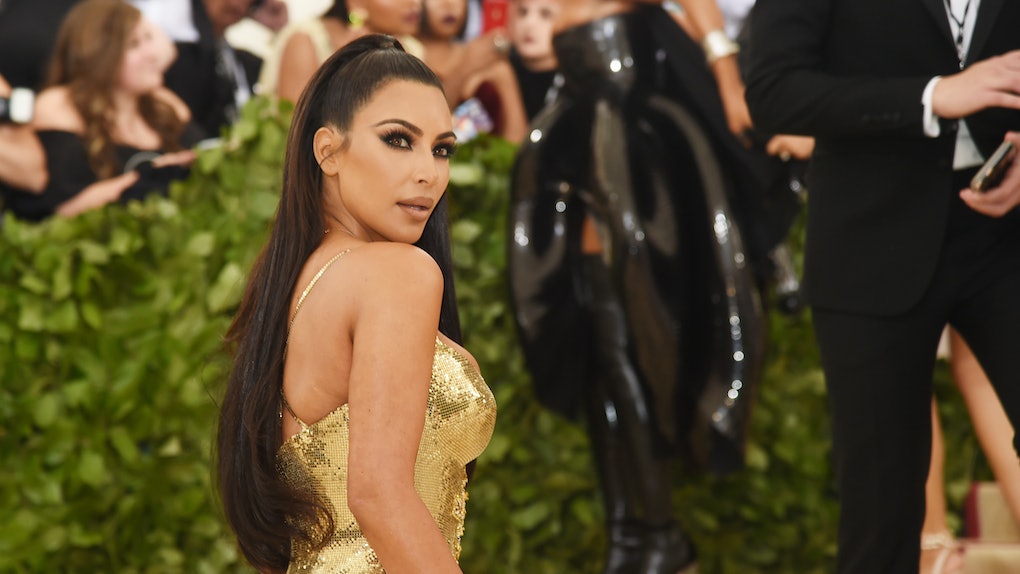 Kim Kardashian’s Workout Motivation All Comes Down To Her Mindset, According To Her Trainer

Sometimes I wonder how the Kardashians keep up with their own lives, because I don’t know about you, but I need a glass of wine just watching them juggle it all. Take Kim, for example: This mama of three has a lot going on at all times. Between taking care of the kids, being a rock for husband Kanye West, and running a very successful cosmetics empire, you have to wonder where Kim Kardashian’s workout motivation comes from. Say what you want about the reality star, but a quick glance over her social media accounts proves that Kim’s kind of a superwoman, both inside and outside of the gym. And according to her personal trainer, the secret to this TV-personality-turned-beauty-mogul’s motivation isn’t all that astronomical. In fact, it’s fairly simple: Kim K just has the right mindset.

You can ask pretty much anyone what’s stopping them from sticking to an exercise routine, and I can almost guarantee their answer will have something to do with a lack of motivation. Be honest: How many times have you slipped on a pair of sneakers only to untie them minutes later, finding any excuse not to hit the ground running? It’s drizzling outside, too cold, you just ate, you’re sore from yesterday’s workout — you’ve used them all, and then some.

The thing is, while there are tons of clever workout motivation tricks people swear by to get that extra boost of encouragement — like wearing your workout clothes to bed, setting your running shoes near your coffee pot, or using the buddy system — let’s be honest: If the mindset to stick with a routine isn’t there, you won’t be, either. Ergo, the only thing left to do is take Kim K’s lead, and change your mindset to change your approach to all things fitness.

Despite an extremely busy schedule, Kim Kardashian pencils in a workout at 6 a.m., six days a week, according to Women's Health.

Keep in mind, by absolutely no means should you feel obligated to work out six days a week — just getting your body moving even a little bit every day is a job well done. However, if you're looking to commit to a regular fitness routine, Kim Kardashian is definitely an awesome role model to look to for some inspiration on how to keep that burst of motivation consistent.

Unless you’re a morning person, waking up an hour earlier than usual to run a 5k or work through a bodyweight circuit might be a lot to ask of you — at least, at the beginning. At the same time, if you genuinely want to make a change in your life, you’ll find a way to do so, even if that means going out of your comfort zone. For the 37-year-old Kardashian, it means rolling out of bed and hitting the gym bright and early before dropping the kiddies off at school.

In an interview with Women’s Health, Kardashian's trainer, Melissa Alcantara, talked about Kim Kardashian's workout motivation and her unwavering enthusiasm for keeping up with her physical fitness. Alcantara basically painted a picture of a badass mama who puts her babies first, but who also makes sure her own physical health is a priority, too. “She’s super responsible,” Alcantara told the publication, noting that Kardashian is always on time and never cancels a workout session — which, BTW, can run anywhere from an hour to an hour and a half. The trainer told Women's Health that Kardashian works up a killer sweat before sending her kids off to school each morning, and then she returns to her casual, multi-million-dollar corporation for the rest of the day. If that’s not #momgoals, then I don’t know what is.

For Kim K, working out is just part of her routine, like brushing her teeth or making the bed: Good day or bad day, a workout is always part of the plan.

Listen, I know myself, and I’ve tried going to the gym at 6 a.m. every morning to get my workout in before the rest of my day begins. For me, that kind of routine was short-lived, lasting all of maybe two weeks, and that's despite my being a morning person, BTW. I give Kim a lot of credit for waking up extra early just to be in #beastmode at the gym before diving headfirst into her mommy duties for the day, but sustaining any workout routine for more than a few weeks is no small feat. Unfortunately, there’s no magical tonic or pill you can take to instantly get a little of that motivation for yourself; Alcantra told Women’s Health it all boils down to your mindset:

It’s just her drive. She knows what she wants, and she has to fit it in. She's like ‘I have to work out, this is part of my life’, it’s all about the mindset.

Once it’s part of your daily routine and your life, then it’s not something you have to think about, you just have to do it.

What I think a lot of people get wrong about working out and staying consistent with a routine is that you have to have a flexible schedule to work with, or a personal trainer to keep you accountable. The truth is, though, the motivation to work out ultimately has to come from you — not an open day planner, and not from a trainer or friend.

What's more, you don't even have to belong to a gym; you just have to move: Walk your dog every morning instead of just letting your pup roam free around your backyard. Ride your bike to work instead of driving in, or take a few minutes before bed to do some stretches instead of scrolling through Instagram. Work with whatever resources are available to you, and just start now. Wake up in the morning thinking like a Kardashian, and just do it, girl.