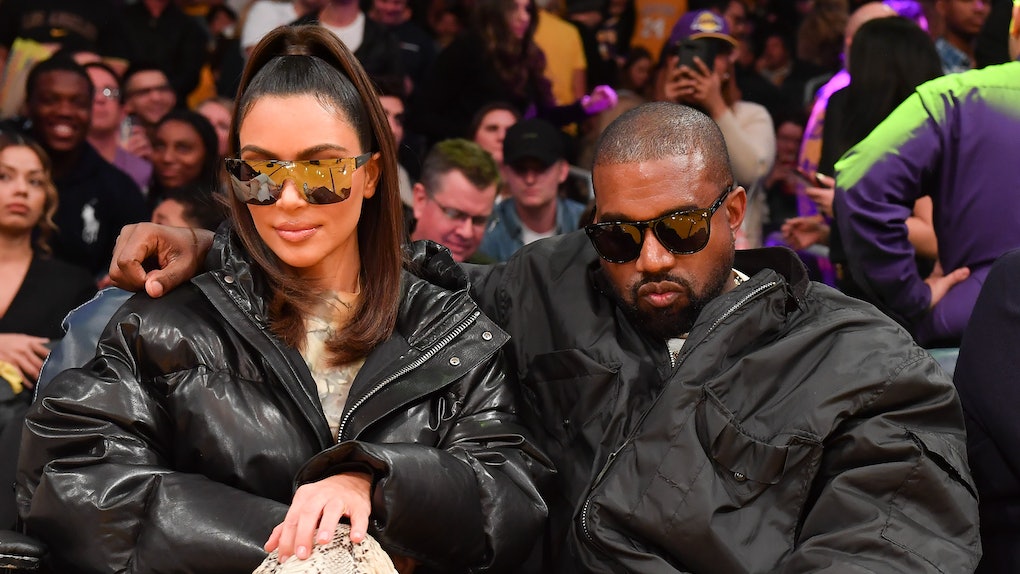 Kim Kardashian took a lesson from little sis Khloé Kardashian and has forgiven Tristan Thompson for that cheating scandal — and she wants people to know it. After Kim and Kanye West sat courtside at the Cleveland Cavaliers game against the Los Angeles Lakers on Jan. 13, speculation she was booing Thompson from the sidelines began to swirl. Kim Kardashian's response to rumors she booed Tristan Thompson proves there's no more bad blood.

Kimye fans were pumped to see the couple step out for a rare public outing on Monday. But, Twitter users couldn't help but notice, at one point, it appeared Kim stood up to boo Thompson as he was standing at the free throw line. With thousands of people in attendance at the game, it was near impossible to hear if Kim *actually* booed him in a since-deleted video posted by one onlooker, but that didn't stop social media from reacting to the rumored shade.

"Kim Kardashian really stood up courtside so she could boo Tristan Thompson at the line," one person wrote, with many tweeting similar thoughts. After all, Kim has been pretty outspoken about her not-so-nice feelings toward Thompson following both of his headline-making cheating scandals.

But Kim stepped in to clear the air. When she caught wind of Harper's Bazaar's story about the whole thing, Kim was quick to set the record straight.

"I was there to support him!" Kim tweeted. "And was cheering screaming LETS GO TRISTAN!!!!! I would never go boo anyone. I don’t go to hate, only to cheer!"

So it seems Kim has put the past in the past, something Khloé has preached in recent months. Koko addressed the Jordyn Woods and Thompson cheating scandal in December 2019, sharing that she's over holding onto hate.

Kim and Kanye's trip to Thompson's game isn't the first time the three were spotted in the same place in 2020. Thompson even tagged along to Kanye's Sunday Service over the weekend. Not to mention, Thompson celebrated the holidays with the KarJenner family at their annual Christmas Eve party, so it appears the Kardashian clan has welcomed the athlete back into their lives.