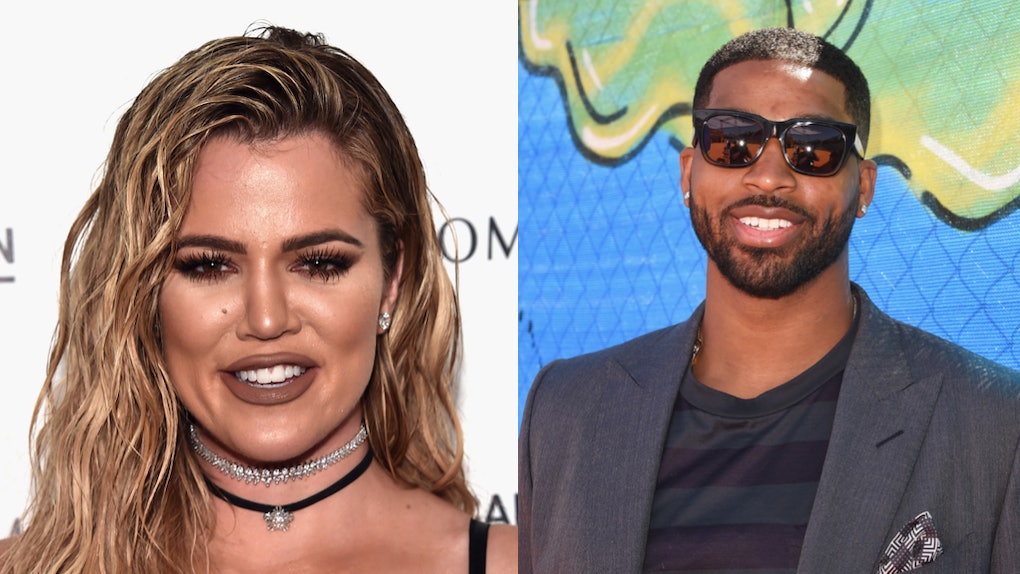 Despite all the drama between Khloé Kardashian and ex Tristan Thompson, it seems like the two have been able to put aside their past issues for the sake of their daughter. In a podcast airing on May 20, Kardashian opened up about how she and Thompson are working to build a good foundation for their 13-month-old, True, and it's sweet. Khloe Kardashian’s quotes about Tristan Thompson on the Divorce Sucks! podcast show they're trying to ensure that True doesn't sense any "heavy energy" around her. She also briefly talked about her breakup with Thompson, how it's still fresh, and how those feelings are still affecting her.

"There's moments, because our personal emotions are still in there, and for me, you know, Tristan and I broke up not too long ago, so it's really raw," Kardashian said. "Those emotions can be heightened at times, but I do everything in my power to not even bring... True is like a year and a month old, so she doesn't really know what's happening, but to me, she does know. She feels energy, and I'm a big believer of that. So, I do everything in my power to not put any sort of heavy energy around her. Maybe that sounds a little too bohemian for some people." But it seems Kardashian and Thompson are, in fact, taking the "bohemian" route, because he was at True's first birthday party on April 15.

"I saw photos of the birthday party that was last month, and Tristan was there, yes? And I mean, that's amazing for [True]," Laura Wasser, host of the Divorce Sucks! podcast, told Kardashian. "Who knows if they remember their first birthday? But there will be pictures." "There will be," Kardashian assured her. "And I didn't do it 'cause I thought she was going to remember this first party. First of all, the party, there's like unicorns and things she doesn't even know, I could've gotten stuffed animals. It was really for me. I just wanted a happy, heavenly place. But I know she's going to want to look back at her childhood memories, like we all do," she continued. "And I want to give her the same thing."

"I know her dad is a great person," Kardashian said in the podcast. "I know how much he loves her and cares about her. So, I want him to be there. You know, it was civilized, and we did it." And honestly, that's something to be exceptionally proud of, especially after Thompson reportedly kissed Jordyn Woods in February 2019, and reportedly cheated on Kardashian in April 2018, just before True's birth. Elite Daily previously reached out to Thompson's team for comment on the reports of infidelity, but did not hear back by the time of publication.

So, while Kardashian and Thompson have had their fair share of drama as partners, it seems like these two are doing their best to be good parents to their baby girl. And that's the most important thing.