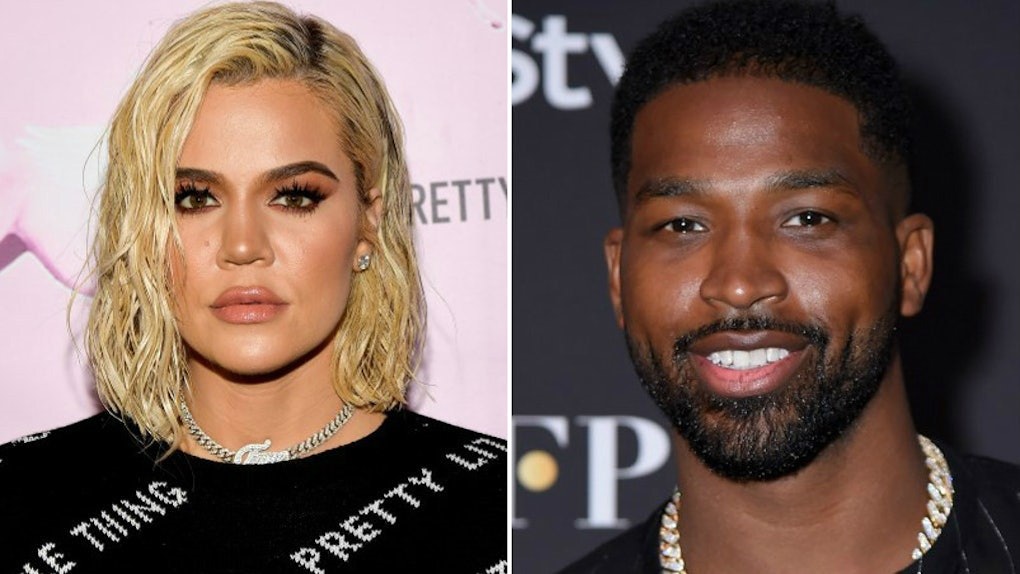 There’s no denying that Khloé Kardashian has been through a lot over the past year. Not only did she become a first-time mom, but her longtime boyfriend Tristan Thompson reportedly cheated on her... twice! Elite Daily reached out to Kardashian and Thompson's teams at the time of both reports but did not hear back. Most recently, Thompson was linked to family friend Jordyn Woods, and it’s caused quite a lot of drama for everyone involved. With all that’s gone on in Kardashian’s life recently, it’s hard not to feel sympathetic about her situation. But there’s one thing that’s got fans thinking long and hard about Kardashian’s current predicament — whether she might have broken things off with Thompson before the Woods and Thompson drama even started. So, did Khloé Kardashian and Tristan Thompson split before the Jordyn Woods drama? Well, if Woods’ recent interview with Jada Pinkett Smith on Red Table Talk is any indication, then they might have. Elite Daily reached out to Kardashian and Thompson’s teams for comment on the timeline of their breakup, but did not hear back by the time of publication.

In any case, Woods’ appearance on Red Table Talk was pretty controversial, and she revealed quite a lot of details about the situation. For example, Woods explained that she was pretty drunk when she reportedly was kissed by Thompson. Elite Daily reached out to Thompson's team for comment but did not hear back.

"I was drunk. I was not tipsy, I was drunk. But I was not beyond the point of recollection,” she explained. “I know where I was. But, on the way out [of Tristan's house] he did kiss me. No passion, no nothing. On the way out he just kissed me. It was a kiss on the lips. No tongue kiss, no making out. Nothing. I don't think he's wrong either, because I allowed myself to be in this position."

That’s all pretty standard stuff and exactly what you’d expect from a tell-all interview like this. But one thing that was totally unexpected was a tiny detail Woods gave away while explaining how she would feel if she was in Kardashian’s shoes.

“We’re all dancing and drinking. I’m not thinking: ‘I shouldn’t be here.’ And that’s my first step where I went wrong. And how would I feel if someone close to me is hanging at my ex’s house — the father of my child? I didn’t think about that. That’s the first part of the problem. I should have gone home after the party,” Woods said.

Did you catch that? She said that Thompson was already Kardashian’s “ex” when she went to his house. So, what could that mean? Well, fans seems to think it means that Kardashian and Thompson weren’t even together when all this stuff went down between him and Woods. Here’s what fans are saying on Twitter about it:

So, all that said, it sounds like fans are getting hip to the idea that maybe this whole situation isn’t exactly what it seemed in the beginning. And that’s great news, especially when you consider the fact that Kardashian literally accused Woods of breaking up her family.

So, did Woods break up the Kardashian-Thompson family? Well, even Kardashian admitted that was a bit of an exaggeration.

Whatever the situation is, it’s clear that fans don’t have all the facts they need to make a solid judgment. I’d bet anything that they’ll have to wait to watch the new season of Keeping Up with the Kardashians to find out the whole story. And even then, will fans get the whole truth of the matter? I guess everyone will just have to wait and see.