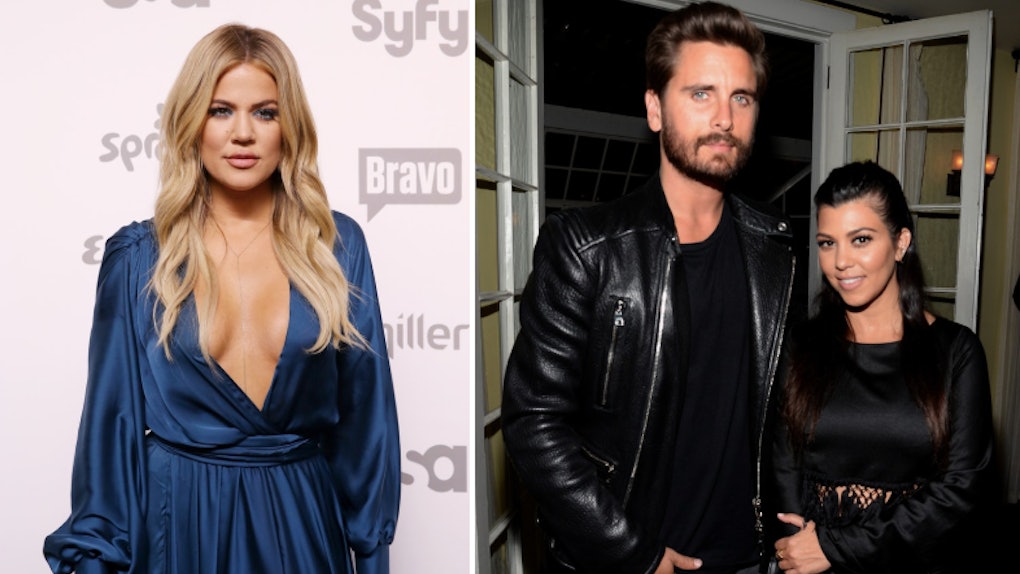 Hold onto your hats, everyone — it sounds like Kourtney Kardashian and Scott Disick might be destined to get back together someday?! ICYMI, in the April 28 episode of Keeping Up With The Kardashians, the sisters visited a spiritual healer during their family trip to Bali. Kourtney revealed to Khloé and Kim that the guru said she and Scott were “soulmates” and “have to decide whether [they] want to be together or not be together.” Now, if you’ve heard any of Khloe Kardashian's quotes about Kourtney Kardashian & Scott Disick over the past 10 years, you know that her feelings about this are probably complicated, to say the least.

When Kourtney shared this “soulmate” revelation with her sisters, both Khloe and Kim looked stunned. After all, Kourtney and Scott have been broken up since 2015, although they maintain a (mostly) friendly relationship for the sake of their three kids. And Scott has been with his current girlfriend, Sofia Richie, for well over a year now — so a reunion with Kourtney seems unlikely, at least for the time being.

But what does younger sister Khloé think about the former couple? Even though she obviously adores Kourtney, Khloé has kept up a fairly close friendship with Scott in the years since the split. Never one to mince words, though, she has always been vocal about her feelings regarding these two. Khloé’s quotes reveal she doesn’t always know what to think of Kourtney and Scott… but she loves them both regardless.

December 2009: Khloé slapped Scott after he got Kourtney pregnant

"You thought she was going to leave you, so that's why you knocked her up … You wanted to just keep her for 18 years and not let anyone else have her."

Who can forget the iconic moment when Khloé yelled at Scott on the show during a night of partying? Kourtney was pregnant with the couple's first child at that point, and Khloé gave Scott a piece of her mind about the relationship. After yelling at him, she slapped him in the face. Dang, girl… go off.

December 2009: Khloé revealed she wasn't a fan of Scott

Khloé later defended her behavior by calling Scott a “douche lord,” whatever that means. It’s safe to say she wasn’t all too fond of the relationship at that point.

May 2015: Khloé could tell Scott really loved her sister

You can’t deny how much he loves Kourtney, and I do think he tries … We’re very much involved in each other’s lives.

Just a few months before Kourtney and Scott split in July 2015, Khloé told Complex magazine that she believed Scott really cared for her sister, and that he was working on being the best boyfriend he could be.

January 2016: She encouraged Kourtney to move on

I've been like, 'Do you want to go on a date? Like, what do you want?' She's not thinking about that yet. You know, she's so all about her kids, so all about, you know, 'Let's get also Scott healthy and in a good spot.'

Apparently, it took quite a while for Kourtney to find love again after Scott — but Khloé was there for her every step of the way. She told E! News that Kourtney wanted to put her family first before she started dating again.

November 2017: Kourtney and Scott went to Khloé for relationship advice

On the show, Khloé expressed that she was getting really tired of listening to Kourtney and Scott’s drama, and that she thought their entire relationship was “dysfunctional.” Yikes.

August 2018: Khloé joked about them getting back together

A girl can dream

At Kylie Jenner’s 21st birthday party last year, Kourtney and Scott were spotted sitting next to each other — not long after Kourtney ended her relationship with Younes Bendjima. Ever the jokester, Khloé shared a video of Scott and Kourtney with this LOL-worthy caption.

December 2018: Khloé said she was proud of their co-parenting

Beyond proud of all of them!!!! This is LOVE!! Your children before anything else!! All amazing adults right right!!!

When Kourtney and Scott took a vacation together with their kids (and Sofia), Khloé got on Twitter to praise her sister for her maturity and strength. Kourtney and Scott haven’t always had an easy time co-parenting, but they’ve made it a priority to stay civil for the sake of their kids.

April 2019: Khloé revealed that she felt bad for Sofia

If I was Sofia, I would be so insecure.

And now, following all this “soulmate” drama, Khloé says she’d feel uncomfortable AF if she were in Sofia’s shoes. I mean, can you imagine how you’d react if someone told your man he and his ex-girlfriend were meant to be together? It’s super awkward for everyone.

No matter what happens in Kourtney and Scott’s relationship, you can bet that Khloé will be the first to weigh in. She cares a lot about both of them and obviously wants to see everyone happy. Will this “soulmate” situation change anything between Kourtney and Scott? It’s not clear yet, but if it does, I can’t wait for Khloé to grace us all with her strong opinions. There’s truly never a dull moment in this fam.