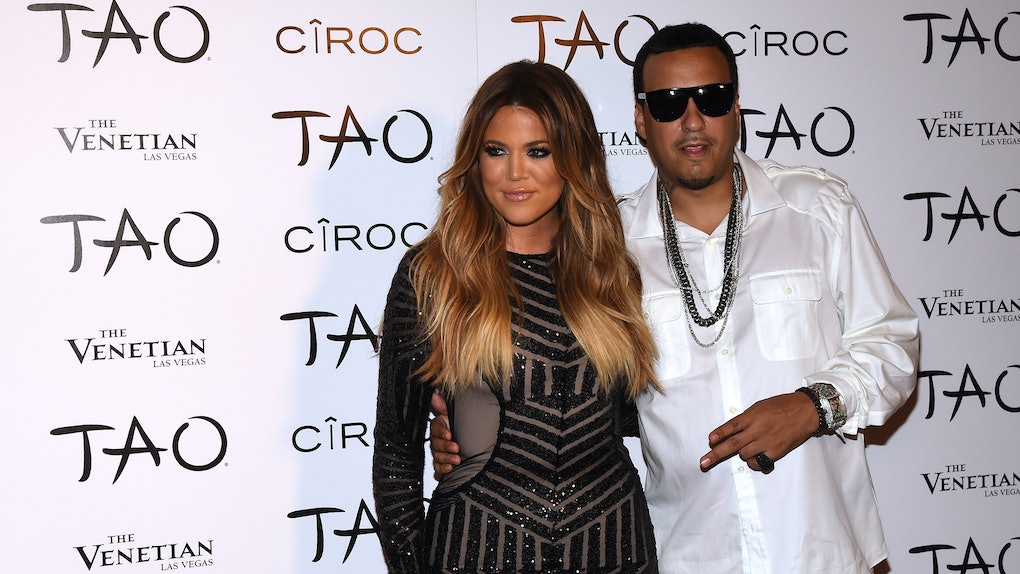 Khloé Kardashian has been through her fair share of relationship drama, but there's one ex in her life who might be making a comeback. It seems like Khloe Kardashian and French Montana were spotted together at Kourtney Kardashian's 40th birthday party on Thursday, April 18, and honestly, I'm pumped! ICYMI, Kourtney's party was lit AF. Between the decor, the guest list, and a cake modeled after a naked Kourt herself, it seemed like a party for the books. But Khloé and French reportedly "hanging out" together might be my favorite piece of news to emerge from this Kardashian soirée.

Now, if you've had trouble keeping up with the Kardashians, allow me to remind you that Khloé and French had a rollercoaster of a relationship back in 2014. They dated most of that summer, but called it quits soon after. Then, they reportedly got back together. Then, they reportedly broke up again. Basically, it was confusing as heck, but when they were together, they seemed really happy. Like, genuinely happy. The kind of happy Khloé deserves! (I stan French and Khloé, can you tell?)

Flash-forward five years later, and Khloé has been no stranger to the drama. She's been through not one, but two very public cheating scandals with her ex, Tristan Thompson, and one made headlines mere days before she gave birth to their daughter, True Thompson.

Most recently, Thompson was seen getting up close and personal with Jordyn Woods — Kylie Jenner's best friend. Woods denied the reports that they'd hooked up on Red Table Talk, but admitted that Thompson reportedly briefly kissed her, and that she decided to keep that truth from Khloé. Khloé understandably did not take that well, and her relationship with Thompson (which was reportedly "off-again" when his reported encounter with Woods went down) has reportedly been strained ever since.

In short, Khloé has been through the ringer, and it wouldn't be surprising if she sought comfort from an old friend like French. Chances are, they have a good relationship if he's being invited to her sister's birthday party. This of course doesn't mean they're back together, but In Touch did report that the two were spotted hanging out in the same group at the party. Really, the two could just be great friends, as several sources have reported that Khloé has been leaning on French for support amid the drama. Really, who could blame her for needing a friend?

But if you're a Khloé and French stan like me, not all hope is lost for a re-kindling. In Touch also noted that French previously left a comment up for interpretation on one of Kourtney's Instagram posts back in February. It was a photo of Khloé, Kendall Jenner, Kourtney, and Kylie, and French commented "🤙." What does it all mean? All I know is, if Khloé and French do decide to rekindle their romance, the only thing that matters is that they make each other happy and treat each other with respect. Because honestly, with as much as Khloé has gone through, she's still a total boss babe and an incredible mother to True. Safe to say, she doesn't have time for any more nonsense on the dating front. She deserves happiness, love, and peace, and whether she finds that with French, someone else, or her own bad a** self, I'm confident she's going to get it.