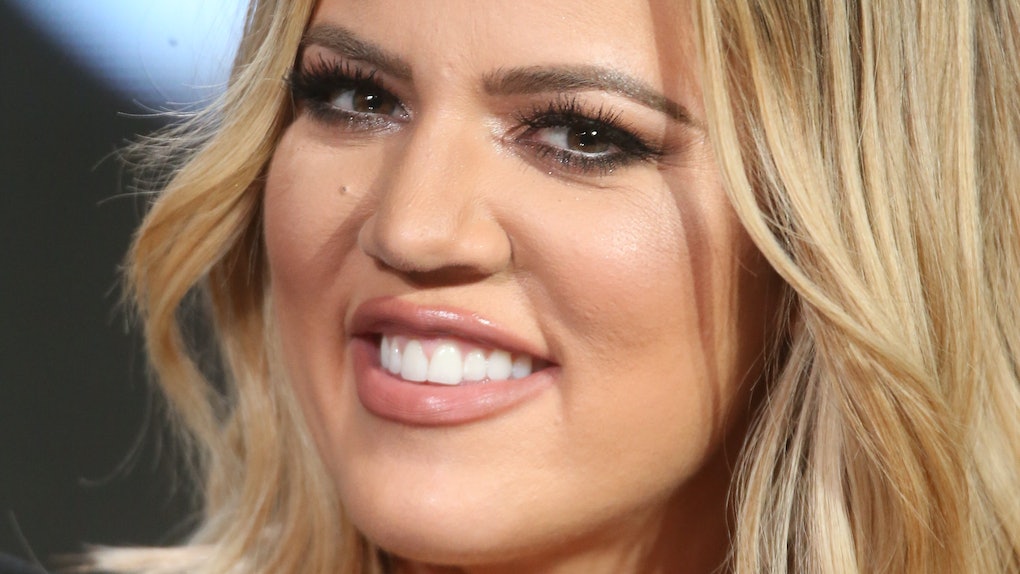 After relationships with athletes Lamar Odom, James Harden, and Tristan Thompson, it may be confusing to understand why Khloé Kardashian dates basketball players. In fact, it's so confusing that Jimmy Kimmel decided to ask Kardashian about it when she appeared on his show Monday night alongside the other two Kardashian sisters. "I do want to ask about this character that you had a baby with," Kimmel asked Khloe after chatting with her sisters.

Kimmel clarified his question, "Yeah, is it time to stop dating basketball players?"

As you can imagine, as soon as he asked his question, the crowd went absolutely nuts. "Is that a yes or a no? I can't figure it out," Kardashian jokingly retorted, to which the crowd screamed yes.

Despite the strong encouragement from her screaming fans, Kardashian remained strong on her decision to date basketball players. "You know, I like what I like," she said with a shrug. "What can I say?"

Despite her straight-to-the-point answer, Kimmel was still fascinated. "Do you like basketball?"

"I actually do," Kardashian responded. But don't get her wrong. She's not a basketball player; she's just an avid watcher who happens to also date quite a few basketball players. "I don't play basketball," she told Kimmel after he asked if she plays. "I just like to observe basketball."

"You like the whole thing," Kimmel responded. "It's not just the height thing?"

"No, it's the whole thing of it all," she continued. "But I do agree, I should've listened to my MJ [Kardashian's grandmother] and I should probably start to date, like, accountants or something like that."

For those of you who may, perhaps, be unfamiliar with Khloe's basketball-player-heavy dating history, allow me to give you a little bit of a refresher.

Most recently, she reportedly split up with the father of her child, Tristan Thompson. In addition to being Khloe's ex and True's dad, Thompson is also the power forward and center for the Cleveland Cavaliers. And the two just had a very dramatic and very public split.

News of Thompson's alleged infidelity the first time around leaked just around the same time as Kardashian went into labor with their baby True almost a year ago. Kardashian ultimately decided to forgive him for that original trespass and take him back... until he reportedly cheated on her again. This time, the alleged infidelity took place with Kylie Jenner's best friend and Kardashian's Good American model, Jordyn Woods.

During an interview with Jada Pinkett Smith on Red Table Talk, Woods denied that anything sexual happened between her and Thompson, but Kardashian was not buying it.

"Why are you lying @jordynwoods ?? If you’re going to try and save yourself by going public, INSTEAD OF CALLING ME PRIVATELY TO APOLOGIZE FIRST, at least be HONEST about your story," she wrote on Twitter. "BTW, You ARE the reason my family broke up!"

Khloe eventually apologized for lashing out against Woods in a series of three tweets.

"This has been an awful week & I know everyone is sick of hearing about it all (as am I)," she wrote in the first. "I’m a rollercoaster of emotions & have said things I shouldn’t have. Honestly, Tristan cheating on me & humiliating me, wasn’t such a shock as the first time."

"What’s been harder & more painful is being hurt by someone so close to me," she continued. "Someone whom I love & treat like a little sister. But Jordyn is not to be blamed for the breakup of my family. This was Tristan’s fault."

"I have to move on with my life & count my blessings, my family, my health, & my beautiful baby True," she concluded in the third.

Before dating and starting a family with Thompson, Kardashian was married to L.A. Lakers player Lamar Odom. She also was briefly in a relationship with Houston Rockets player James Harden. So, yeah, it's safe to say she has a type. But hey! She likes what she likes. Can you blame her?