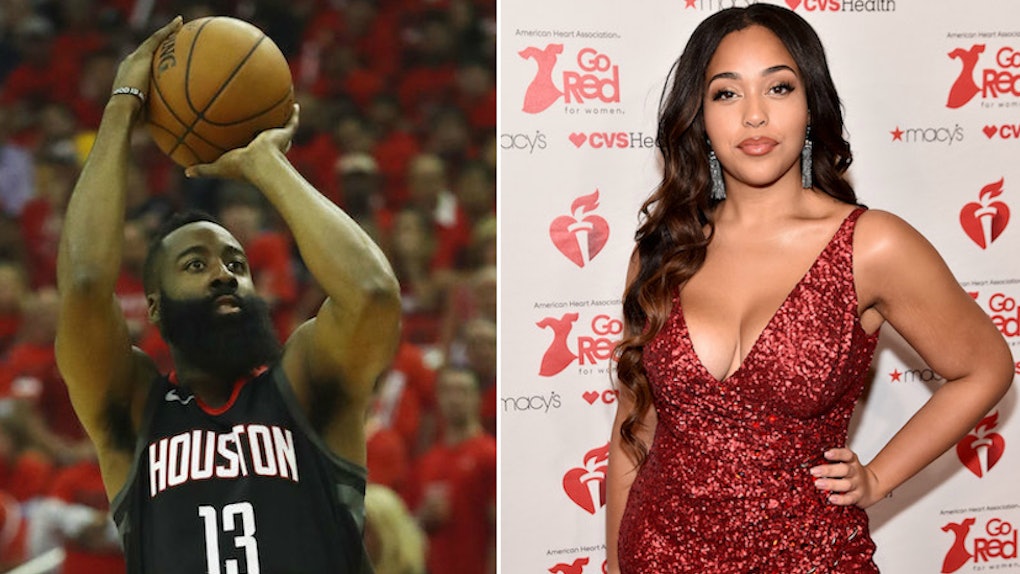 Another day, another chapter in the seemingly never-ending Kardashian-Woods-Thompson drama. It feels like the situation keeps intensifying, with just about everyone involved adding in their own two cents. But, before Woods prepares to share her side of the story with the world on Red Table Talk this Friday, the plot has reportedly thickened, y'all. According to Us Weekly, Jordyn Woods reportedly hooked up with James Harden once upon a time. Yes, the same James Harden who dated Khloé Kardashian for less than a year.

According to an anonymous source who spoke to Us Weekly, "Jordyn did hook up with James Harden after Khloé dated him first." However, the source also maintained that Kardashian was "not with him at the time." Obviously, this bit of news is quite shocking considering the current rumors about Woods and Kardashian's most recent reported ex, Tristan Thompson. ICYMI, Kardashian dated Harden, a shooting guard and point guard for the Houston Rockets, after reportedly meeting at Kanye West's birthday party in June 2015. They reportedly split in February 2016.

Just last week, news broke that Woods and Thompson had reportedly made out at a party, leading to Thompson and Kardashian reportedly breaking up once and for all, and Woods reportedly being kicked out of best friend Kylie Jenner's home. It's a lot to take in, and this recent bombshell that Woods had also hooked up with Harden — albeit when he wasn't with Kardashian — certainly doesn't make things any less messy.

According to the same source who spoke with Us Weekly, "Khloé knew that that happened before this Tristan Thompson fiasco. That’s not news to her. It wasn’t an issue at the time, but it does show now that Jordyn has a history of omitting facts and crossing lines." Basically, this new-to-us information that Woods reportedly hooked up with another one of Kardashian's love interests just makes the whole situation even more messy and complicated.

Since the news broke that Woods and Thompson reportedly kissed, Woods has kept silent with her side of the story. However, along with reportedly moving out of Jenner's house, the model has dealt with a lot of fallout. Woods previously served as a member of the Good Squad — a sort of brand ambassador — for Kardashian's clothing line, Good American, and has now been removed from the Good American website all together. The drama isn't slowing down, and with Woods' upcoming appearance on Red Table Talk, it's sure to heat up even more.

Taking to Instagram, Woods went live on the social media platform this week to share a video of her walking to the Red Table Talk set. According to TMZ, Woods is planning on talking about the incident with host Jada Pinkett Smith, where the intention is "to create a healing between Jordyn and Khloe." It's unclear what exactly Woods will say in her interview, set to air on Friday, March. 1, but it's likely that she will use the opportunity to tell her side of the story, whether or not that includes an apology.

Tensions are high in the Kardashian-Jenner realm at the moment, and Woods is definitely receiving a lot of backlash for her reported actions. Perhaps Woods is truly sorry for what happened and will seek forgiveness, or maybe there's more to this story than meets the eye. We'll just have to tune in and see how it all unfolds.