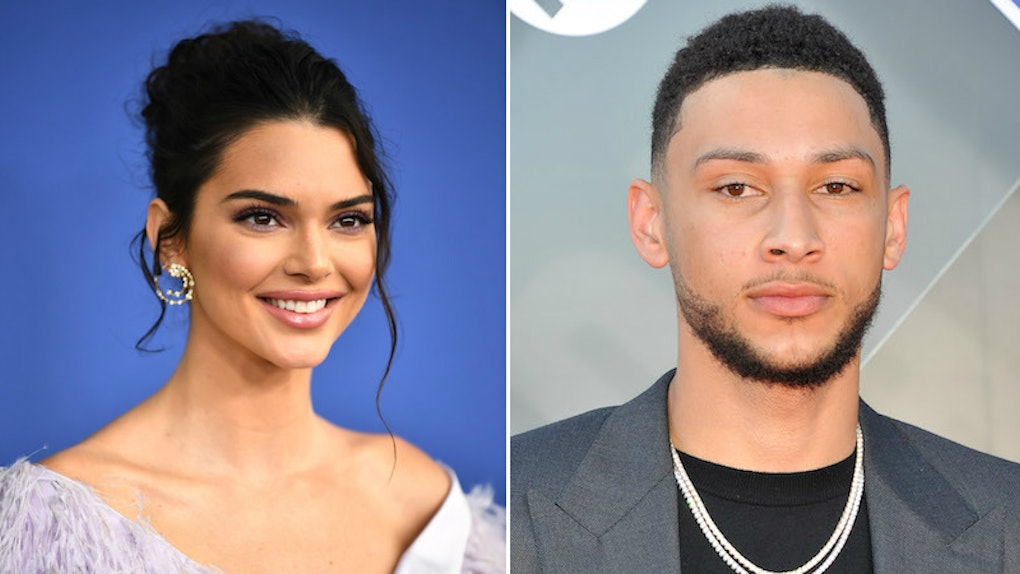 Even though Kendall Jenner likes to play coy compared to her very public sisters, fans have caught on to her growing relationship with NBA player, Ben Simmons. The two have been linked together for a few months now which definitely reads as SERIOUS in celebrity-world. Kendall Jenner and Ben Simmons looked so cute together at Khloé Kardashian's Fourth Of July pool party, and it has me all hot and bothered. Why? Oh, I don't know. Just because it's proof these two are serious enough for Jenner to introduce him to her family!?!? Please, keep up, people.

Jenner and Simmons were first spotted during the holiday week hanging out at the Waldorf Astoria Beverly Hills Hotel pool. An eyewitness made it sound like their behavior was definitely romantic, telling US Weekly, "Kendall and Ben were getting cozy in the hot tub... They snuggled up and looked happy together!" Elite Daily reached out to Jenner and Simmons' teams for comment on the report, but did not hear back by the time of publication. Snuggling near pools must be their thing, because they were caught one day later doing the exact same thing at Khloé's house.

Khloé's been known to throw epic Fourth of July bashes, and this year she returned to her home in Los Angeles to host again. As part of the celebration, Kardashian posted a video of a friend giving a toast in front of happy guests. Just behind him, fans spotted Jenner and Simmons casually lounging on one-another in a comfy chair. Jenner is in the red shirt and Simmons is sitting in between her legs.

Look, the Kardashian/Jenner family is not easy. If you're introduced to the clan you're in it now, baby. Despite the media's "easy, breezy, casual" narrative about Jenner and Simmons' relationship, their actions seem to suggest they're actually pretty serious. I mean, come on. You don't just bring anybody over to a Kardashian pool party, right? In fact, the source told US Weekly the two are "pretty inseparable."

The insider claimed Jenner and Simmons “are still hanging out quite a bit” and “they are pretty inseparable at the moment and are still going really strong.” The source also said they were "exclusive" but "not official" which is the most hilarious oxymoron to me. It sounds like this insider is trying to respect Jenner and Simmons' boundaries, but is basically saying, "Yes. This is happening. For real."

However, the source also noted one thing that might be causing Jenner to take things extra slow is her busy work schedule as a global supermodel. (Sure, I can see where that might be a time-suck.) The insider explained, "her work and travel schedule is pretty insane, so for her to commit to anyone at this point in time isn’t necessarily realistic." To be fair, everyone Jenner's been linked to recently sort of fizzled out organically. Brief flings with NBA player Blake Griffin, fellow model Anwar Hadid, and rapper A$AP Rocky all came and went without much noise.

A different source told PEOPLE magazine Jenner is enjoying dating around and isn't looking to commit to anything serious right now. "Kendall is having fun. She doesn’t want a serious relationship and is just enjoying being single,” they said. “She feels that whenever she has been serious about guys in the past, it’s kind of a mess and doesn’t work out. She invested time in the relationship with Blake Griffin. She isn’t planning on doing the same right now."

Ok fine. Whatever. I'm just saying, not everyone gets invited to Khloé Kardashian's Fourth of July pool party... you're lucky, Ben.