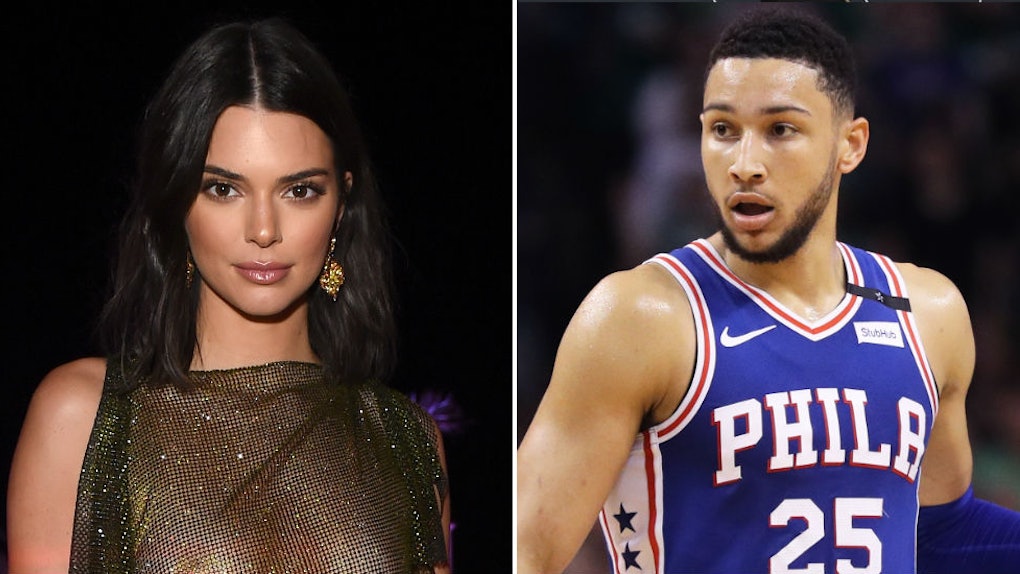 Who Is Ben Simmons? Kendall Jenner Is Reportedly Dating The NBA Star & There's Some Drama

Well, well, well. What do we have here? It appears we have a new professional basketball player caught in the Kardashian web and this time it's thanks to Kendall Jenner. The 22-year-old model is linked to a new NBA player (the third), leaving everyone asking — who is Ben Simmons? Where did he come from? And, why won't Kendall date me? Simmons currently plays for the Philadelphia 76ers and apparently has been quietly seeing Jenner for a little while now. Of course, nothing that goes on with the Kardashian/Jenner family comes drama-free, and Kenny's new relationship is no exception.

According to Page Six, Jenner and Simmons are officially a "thing." Multiple sources claim they have been seeing each other "for a few weeks." According to the publication, they've been spotted hanging out in both Los Angeles at the Beverly Hills Hotel and in New York City at a restaurant called Vandal. While in New York, one source told Page Six, "Security measures seemed to have been taken to ensure Kendall and Ben enjoyed their night hassle free. They were smiling the night away with their friends." Fans know Jenner spent Memorial Day with her older sister Kourtney from social media, but the report claims Simmons landed at LAX airport on Tuesday to meet her in LA a day later. Elite Daily reached out to both Simmons' and Jenner's team for comment on their relationship, but did not hear back by the time of publication.

Like with every Kardashian romance, this one also comes with its fair dose of, "Oh boy, here we go." While their relationship seems innocent enough from afar (i.e.: predominantly out of the tabloids and fairly private) it looks like Simmons was previously linked to singer-songwriter Tinashe not that long ago, and may not have ended it under the best of terms. In fact, her Instagram is still heavily peppered with pictures of herself and Simmons and their last photo together was as recent as April 20th. That's just over a month ago.

She captioned the image: "thankful for you."

Never met you before in my life. days after u break my sis heart u do this... ppl all lied on her talking fake news about my sis *doing kardashian sh*t* u cheat on her w a Jenner

Kudzai also engaged with commenters on his thread suggesting Simmons was actually still with Tinashe when he started dating Jenner and calling him a cheater. Elite Daily reached out to Tinashe and Simmon's teams about these claims, but did not hear back by the time of publication.

Meanwhile, Tinashe posted a photo of herself on Instagram where she looks absolutely stunning rocking a bikini. She captioned the picture, "I set the bar. I'm the f*ckin bar." She also follows both Simmons and Jenner on the social media platform, whereas Simmons doesn't follow either woman.

The truth is out of all of the Kardashian sisters, Jenner's love life has the least amount of exposure. Even when she was seriously dating Blake Griffin fans were hard-pressed to learn many details beyond the fact they ate dinner together sometimes and she would occasionally go to his basketball games. In this scenario, the best fans can do is hang out at fancy restaurants and sign up for Philadelphia 76ers season tickets in hopes that the famous pair may stop by. It ain't cheap stalking celebrities.