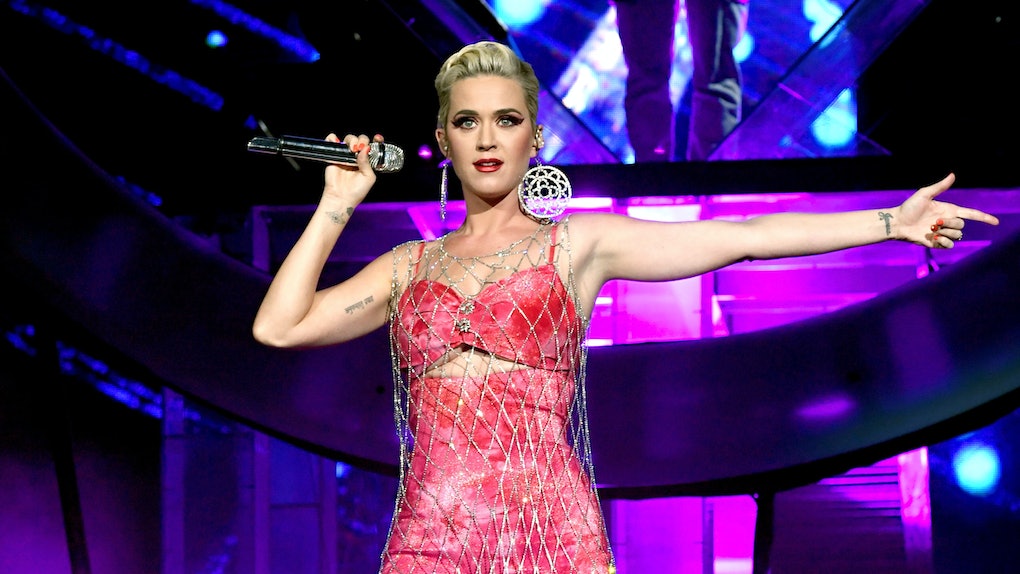 Lots of people were disappointed at Daenerys Targaryen's bleak fate after the final episode of Game Of Thrones, but at the very same time said episode aired, it seemed another long-locked platinum blonde queen was serving looks on another channel. That's right, there's a new Khaleesi in town, people! Katy Perry's new long, platinum blonde hair on the American Idol finale seriously stole the show, and although I've sincerely loved her short hair vibes for a while now, I have to admit the change looks good. Like, really good.

If I know one thing for sure, it's that there's never been a more popular time for celebs to use wigs and extensions to change up their ~lewks~ on the reg. Another thing I know for sure? Platinum blonde is trending in a big way, and thanks to Daenerys and her goals-worthy waves and braids, the desired look is the longer the better. Given that the Game Of Thrones and American Idol: Season 17 finales took place at the exact same time on Sunday, May 19, it seemed only fitting that Katy Perry, pop star turned AI judge, honored the Khaleesi with an equally regal 'do.

If you haven't noticed, Perry's been rocking short strands for quite some time now:

Occasionally, she goes for a bob or a ponytail extension, but most of the time, she keeps her hair styled slicked-back:

So when she dropped this fire flames look on the 'Gram, pretty much no one saw it coming:

OK Katy, go off! Hairstylist Chris Appleton, aka Kim Kardashian's go-to for a good wig moment, was the master behind Perry's finale look, and he really did the damn thing. She looks incredible! No clue if this was a one-night-only thing, or if Perry plans to keep her hair long for a bit, but I for one think she looks outstanding.

It's a far cry from her OG look — when Perry's "I Kissed A Girl" hit the charts back in 2008, she sported super-dark locks:

Then again, we already knew that Perry isn't afraid to go bold when it comes to changing up her hair:

TBH, she could probably pull off any hairstyle, cut, or color:

I'm not the only one who was feeling Perry's blonde fantasy, either. Appleton himself commented on her selfie, declaring the look his new "Fave hair." Tons of other celebs were in agreement — "GAGGINGG," wrote beauty influencer Patrick Starrr; "Gorgeous," chimed in actress Mindy Kaling.

But of course, ready to sing her praises, as always:

And honestly, just relieved she didn't opt for the opposite:

'Twas 19-year-old Southern singer-songwriter Laine Hardy that won American Idol's Season 17 crown, but if you ask me, I'd say Perry's platinum wig was the true winner of the night. Her strands really stole the show! The season may be over, but I know in my heart it won't be long until we see Perry serve up more great looks. Thanks for always keeping it interesting, Katy.