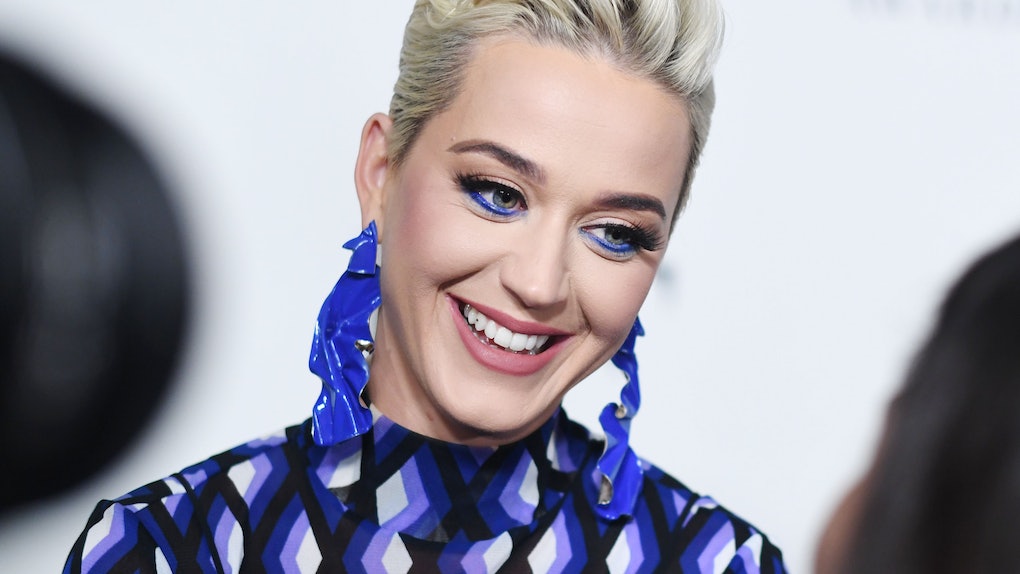 Excuse me, all fashion lovers, prepare yourself, because Katy Perry's 2019 Met Gala look is one for the books. With a theme like "Camp: Notes on Fashion" it was somewhat expected that attendees would show up in the most over-the-top, otherworldly, and straight up wild looks, but Perry took it to a whole other level with her ensemble.

The singer showed up wearing a literal chandelier. No joke, you guys — it had lights and everything! The look was designed by Jeremy Scott for Moschino. She was barely recognizable at first, but upon closer look, you can totally notice it's Katy. Rather than giving us Versailles fashion vibes like some other celebs this evening, she straight-up looks like one of the decorations at the palace. Or maybe like a character from Beauty and the Beast?

This is the woman who has previously worn full on Victoria's Secret-esque angel wings and a dramatic blood red veil to the Met Gala, so it's really no surprise that she went all out, but is it still shocking? Most definitely — shocking in the best of ways.

If you're wondering what the heck camp has to do with fashion, let me explain. Camp is a word used to describe a type of style, and in 1964, writer Susan Sontag wrote an essay entitled Notes on 'Camp' that delved into the aesthetic. That piece of work was the inspiration behind this year's Met Gala theme. Merriam-Webster defines camp as "a style or mode of personal or creative expression that is absurdly exaggerated and often fuses elements of high and popular culture." To put it simply, camp basically means extra. Like, extra extra. Think frills, ruffles, bows, sparkles, color, prints, et cetera. Sounds fun, right? It is, as exemplified by Monday night's pink carpet.

If you really think about it, Perry was basically made for this theme. As mentioned before, her Met Gala style track record has been incredibly impressive — she's basically been doing the whole camp thing for the past handful of years, making it work for each gala's theme. Those angel wings I was talking about? Take a look below. She rocked them to 2018's “Heavenly Bodies: Fashion and the Catholic Imagination"-themed event, and if they're not extra, I don't know what is. (How did she sit down, much less go to the bathroom in the wings? I have so many questions.)

As everyone knows, the Met Gala is where celebrities pull out their most outrageous looks. At least, it's where most celebrities do so. But Perry is truly in a league of her own because she rocks fashion this extreme on the regular, and not just on stage, either.

Here she is at a recent ceremony in which she presented Minnie Mouse with a Hollywood Walk of Fame star. Camp? Yes, queen. Cute? Also affirmative.

Here she is performing what must be her single, "Firework," as indicated by the explosion of feathers and glitter bursting from her crown and feet and the glittery design on her sparkly, poufy dress.

And finally, behold Perry in a lilac Western-inspired look that features a gauzy cape, sheaths of fringe, and enough rhinestones to make Dolly Parton proud.

This is just a tiny sampling of Perry's wildest looks and I, for one, am so excited that there are clearly many more to come.