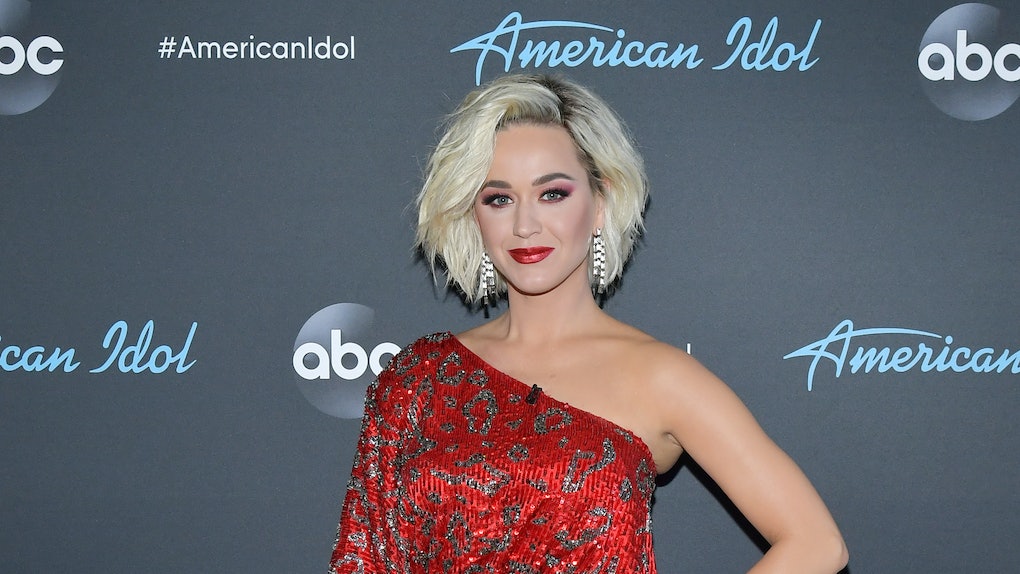 For the past two years, Katy Perry has been a proud member of the bleach blonde pixie cut club. Sometimes I forget that back in the day, the "Fireworks" songstress was a brunette and even a bit of a color chameleon when it came to trying out new shades on her locks. Well, it looks like the star is back to having fun trying out some new looks, because Katy Perry's new long blonde hairstyle that she shared on Instagram is a next-level glow up. TBH, I almost didn't recognize her, and her new look will definitely make you do a double take.

While the "Dark Horse" singer isn't a stranger to trying bold new hair colors and wigs on the regular (especially when she's appearing on American Idol) she debuted an understated but undeniably glam blonde bombshell transformation in an Instagram post on Friday, April 20.

Along with a caption that read, "Como te llamos, baby?" which means "What's your name, baby?" in Spanish, Perry shared a selfie of her rocking a mid-length golden blonde weave with soft layers and a middle part. It's so flattering, and TBH, it might be one of my favorite looks on her yet.

Unsurprisingly, Perry had celebrity hair wizard Chris Appleton to thank for the transformation. The British hairstylist also tends to the manes of A-listers like Jennifer Lopez, Kim Kardashian West, Ariana Grand, and he's no stranger to pulling off some pretty memorable and dramatic makeovers.

Sadly, it's unlikely that we'll be seeing the superstar walking around with these waves on a long-term basis. I did some sleuthing, and noticed that when Perry went to Coachella just last weekend, she was still sporting her trademark blonde pixie — albeit a slightly longer version, as seen in an Instagram photo she posted. I highly doubt that Perry's hair managed to grow several inches in the course of a few days, so it's likely that she's trying out a wig and maybe thinking about what her next hair moves will be.

Still, could this mean that Perry's blonde phase is here to stay? While she decided to get the "Ellen" a few years ago after her hair was damaged from bleaching, it looks like she could be ready to try something new.

"I don't know if you ever dyed your hair blonde, too blonde," she told Ellen DeGeneres while making an appearance on The Ellen Degeneres Show in 2017. "Sometimes your hair falls out when you go too blonde, so this is the way I handled it. This is the destination that I showed up to."

Explaining her dramatic makeover (for reference, Perry was a dark brunette before this all went down), she said, "I went into my hairstylist the other day, and I was like, 'I want the Ellen.' And I got it!"

With her upcoming nuptials to longtime love Orlando Bloom in the books, something tells me that this hair chameleon isn't ready to settle on just one look just yet. And not that Katy really cares about my two cents, but I'm officially submitting my vote for this glowed up makeover.

More like this
How Long Has Billie Eilish Had Blonde Hair? She Hid It For Months
By Daffany Chan
Olivia Rodrigo Debuted New Bangs Ahead Of Her "Deja Vu" Release
By Margaret Blatz
Cardi B Is Dropping A Hair Care Line Sometime In 2021
By Margaret Blatz
Stay up to date