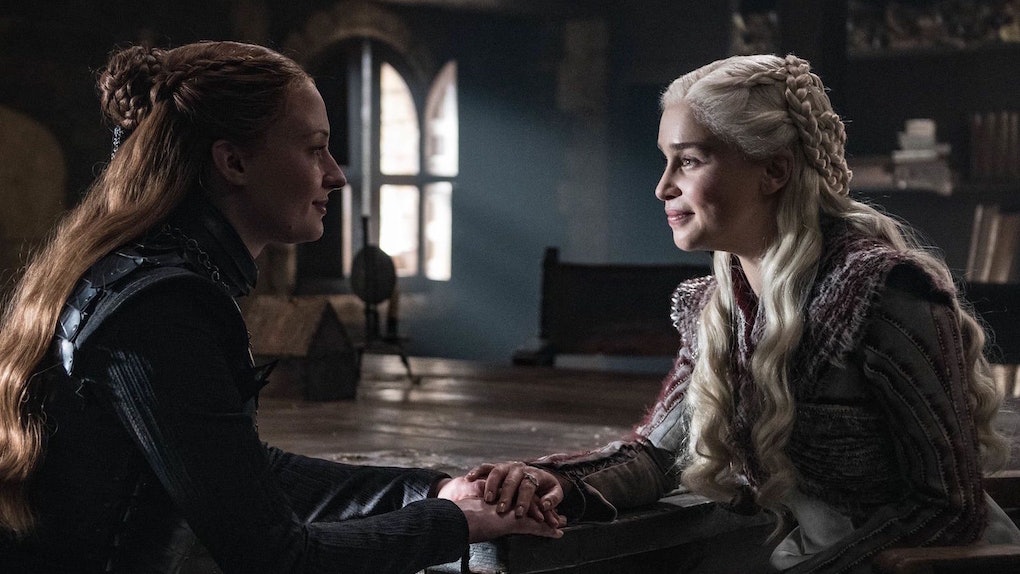 Will Sansa Kill Dany In The 'Game Of Thrones' Finale? Fans Have A Ton Of Dark Theories

With only one episode left to close out the entire Game of Thrones saga, every fan is theorizing about what might go down in what is sure to be the majorly twist-filled series finale. Spoiler alert: This post will contain spoilers from Game of Thrones Season 8 Episode 5, "The Bells." One death that is heavily predicted to occur in the series finale is Daenerys Targaryen, but it is still anybody's guess as to who might be the person to kill the dragon queen. One of the possibilities has fans wondering if Sansa will kill Dany in the Game of Thrones finale. She has certainly made her feelings about Daenerys clear throughout this season, after all.

Before getting into how Daenerys might die in the series finale, let's go over why most fans of Game of Thrones feel that her death in the fast-approaching final episode is inevitable. In Sunday night's most recent episode, Daenerys followed in her father's footsteps and went full Mad Queen on King's Landing, burning the city to the ground along with everyone in it despite the bells of surrender ringing. The dark twist was not only shocking for viewers, but for Dany's allies as well. Jon Snow, Tyrion Lannister, and Arya Stark were struck with disturbed awe at Dany's murder spree, as all of King's Landing turned to ash, leaving the Iron Throne open for Dany.

The brief promo teaser for the series finale underlines the severity of Dany's destruction, as we see her standing over a now ruined King's Landing as the scorched city's new queen. The teaser also shows Tyrion and Arya skulking around the ashy ruins, teasing their role in the final chapter of Game of Thrones:

Now that Daenerys' murderous rage has been put on full display and comparisons to her mad father are vindicated, it seems clear that the next and final move for the main characters of the show will be to try to get Daenerys off the Iron Throne. And obviously, just asking her to abdicate power is not going to work — this is definitely going to result in at least one death. So who is going to kill Daenerys? Well, there are some good reasons to believe that Sansa Stark may be the perfect woman for the job.

Although Sansa was chilling in Winterfell during the King's Landing massacre, she will probably be heading down to the castle (or what's left of it) in the finale. Sansa has made her disapproval of Daenerys known from the beginning of Season 8, and although Sansa hated Cersei, she did develop a sort of twisted admiration for the conniving queen, so Cersei's death at Dany's hands could be motivation for Sansa to strike. Not to mention, Sansa has been trained to thrive in the deceitful, manipulative city of King's Landing more than almost anyone else thanks to her tutelage under Cersei and Littlefinger, which will make her a formidable threat to Dany as the dragon queen tries to get adjusted to her new political position.

While many Game of Thrones fans are looking towards Jonn Snow, Arya Stark, or Tyrion Lannister to take down Daenerys in the finale, take this as your reminder to never count Sansa out, especially when it comes to undermining a power-mad queen.