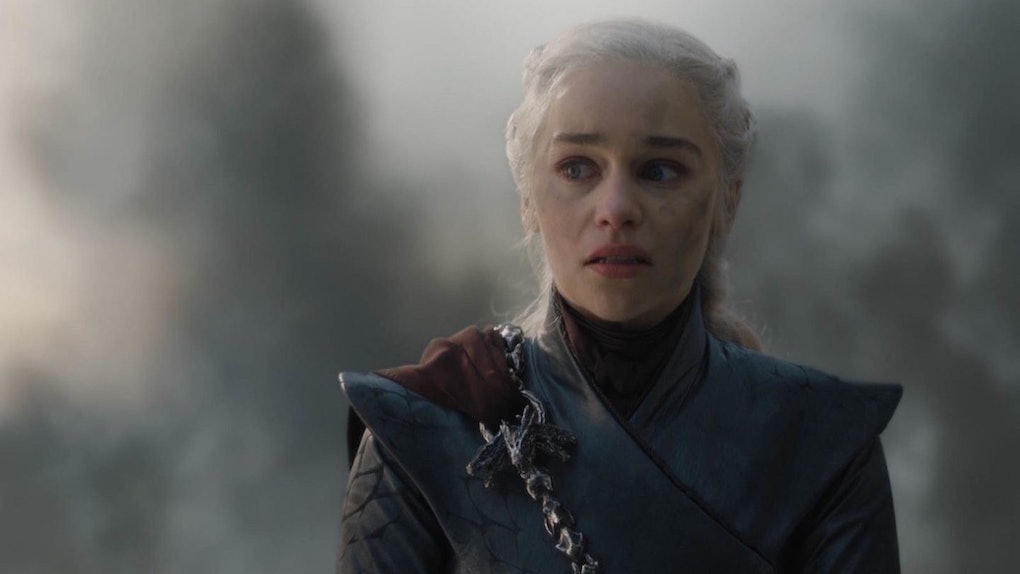 Will Daenerys Die In The 'Game Of Thrones' Finale? Fans Are Expecting A War

As hard as it is to believe, there is only one episode left to finish up the sprawling epic that is Game of Thrones, so obviously everyone is wondering two big things about the very last entry in the long-running saga: Who is going to die and who is going to end up on the Iron Throne? While the Iron Throne question is still anybody's guess, fans do have some solid predictions on which characters will likely die in the our last look at Westeros. Specifically, everyone is thinking will Daenerys die in the Game of Thrones finale after that unexpected twist in last Sunday's most recent episode.

Spoiler alert: This post contains spoilers from Game of Thrones Season 8 Episode 5, "The Bells." In its fiery penultimate episode on Sunday night, Daenerys took a turn for the deadly by ignoring the bells of surrender at King's Landing and instead using Drogon to reduce the entire city and everyone in it to a pile of ashes. Before that destructive twist, there were already some seeds of doubt about Daenerys' potential queenship in the minds of the Starks, Tyrion, and Varys after learning that Jon Snow secretly has the better claim to the Iron Throne, but Jon had remained completely adamant that he would never take the throne from his beloved Dany. But he might have a change of heart after watching his girlfriend/aunt go on a murder rampage killing hundreds, needlessly killing of innocent people.

During and in the aftermath of Dany's city-destroying assault, viewers saw Jon Snow, Tyrion Lannister, and Arya Stark all reacting with terrified shock that their soon-to-be queen was even more ruthless and deadly than the queen that they were overthrowing. The brief, wordless promo teaser for the series finale underlines this even more, showing Daenerys standing above the fresh ruins of King's Landing as the new queen of Westeros, as Tyrion and Arya can be seen formulating their next play among the ashes of the city.

Although it has yet to be said, that next play seems clear: The remaining main characters will band together to take down Daenerys Targaryen — one final murderous betrayal before Game of Thrones takes its last bow. It definitely looks like Daenerys has gone down the same route as her father, the Mad King, and Tyrion and the Starks will have to kill her to be sure that Westeros is not ruled by her vindictive grip.

The big question remaining is who will be the one to actually deliver the killing blow to Daenerys. Probably the most likely candidate is Jon Snow, since Game of Thrones loves a dramatic twist. Not only did Jon look clearly disturbed by Dany's actions in the previous episode, but him killing Daenerys would also fulfill one of the most highly fan-cited prophecies in the show's lore, confirming Jon as Azor Ahai. But Jon is not the only character who might kill Daenerys: Arya is the master assassin of the group, and looks to be planning her kill in the promo teaser, and Tyrion is also primed to turn on Dany. And although Sansa and Bran are both still in Winterfell, they will likely be trekking down to King's Landing in the finale, and we already know how much Sansa hated Daenerys even before she killed hundreds of innocent people.

We will find out how the story ends once and for all when the Game of Thrones series finale airs on HBO on Sunday, May 19 at 9 p.m. ET.

More like this
10 Questions The ‘Schitt’s Creek’ Finale Left Unanswered
By Rachel Varina
This 2021 'Game Of Thrones' Season 8 Trailer Is So Confusing... & So Good
By Ani Bundel
'Never Have I Ever' Season 2: Release Date, Cast, Trailer, Photos, & More
By Ani Bundel
Stay up to date