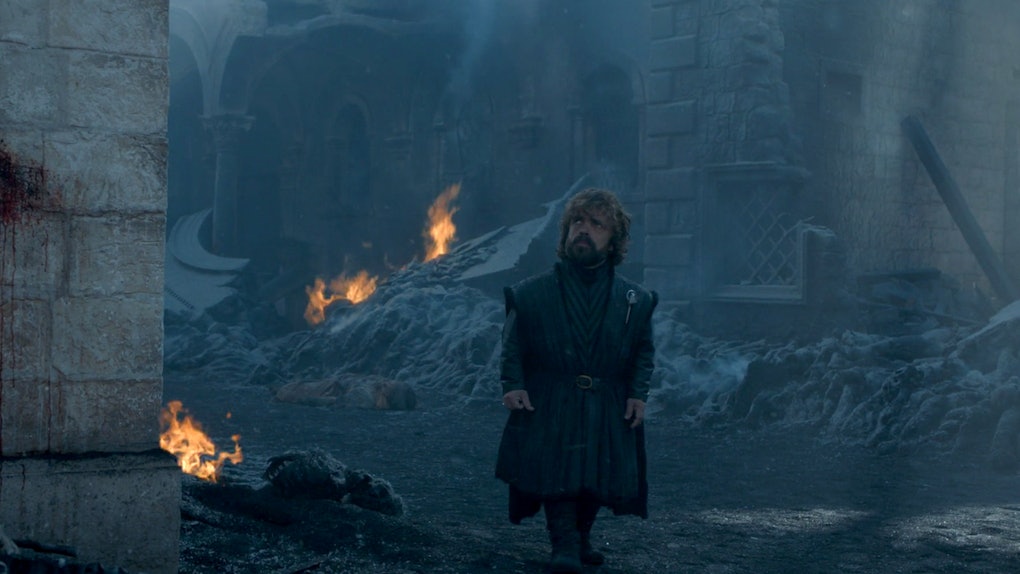 Well, here we are. After almost a full decade of epic battles, fire-breathing dragons, and one of the most die-hard fandoms ever, Game of Thrones has only one episode left to air. And in true Game of Thrones fashion, it looks like the show will be ended with a bang. The Game of Thrones finale promo that aired after Episode 5 on Sunday, May 12, gave fans their first glimpse at what the series' final episode has in store, and it already looks majorly epic.

Spoiler alert: This post contains spoilers from Game of Thrones Season 8 Episode 5. In its penultimate episode, Game of Thrones delivered its most shocking and deadly twist ever as Daenerys Targaryen went full Mad Queen and ordered her dragon Drogon to burn the entire city of King's Landing to ash. Of course, since next week's episode is the series finale (I still can't believe we are actually here!), the promo clip is shorter and more mysterious than ever, but it does give us a good feel for what fans can expect from Game of Thrones' big farewell.

The teaser shows the now-ruined King's Landing covered in ash, and we see Daenerys Targaryen standing above it as the new queen of Westeros. But although her army is still cheering, two other characters are clearly perturbed by Dany's surprise fit of deadly rage. Both Tyrion and Arya can be seen wandering through the ashes with looks of despair, possibly teasing that they will be instrumental in getting revenge on Daenerys. Check out the teaser for yourself below:

While the super-sized Game of Thrones series finale will basically be the length of a feature film, coming in at an hour and 20 minutes, it is actually not the longest episode of Game of Thrones from Season 8. The longest episode of the season, and the series as a whole, was Episode 3, "The Long Night," in which Winterfell went to war with the Night King's army and Arya Stark managed to save the day by killing the supernatural threat.

Unlike the couple of battle-heavy episodes that have defined this final season, next week's series finale seems as though it may be a more interpersonal debate between all of the remaining characters about who will end up on the Iron Throne — finally giving fans an answer to the question that has been at the core of all the fan mania, theories, and predictions for all these years.

But don't get too upset about this being the final episode, Game of Thrones fans, because you still have the upcoming prequel series to look forward to. The new show will reportedly rewind time to thousands of years before the events of Game of Thrones, focusing on the dense lore of Westeros that created the world of the show. It sounds like the Night King and the popular mythic hero Azor Ahai will be central to this prequel series, which will enter production right after the Game of Thrones finale.

Buckle up for a doozy of an episode when the Game of Thrones series finale airs on Sunday, May 19 at 9 p.m. ET on HBO.