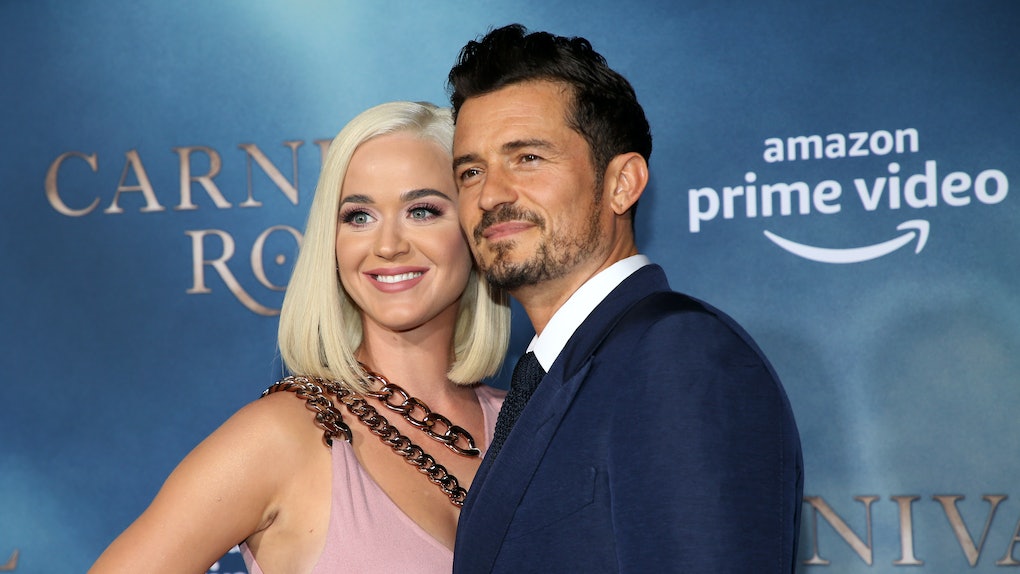 Katy Perry Tricked Orlando Bloom On BBC Radio, & It Was The Cutest Thing

Just how well do you know your partner? If you'd been dating on-and-off-again for, say, three-and-a-half years (like Katy Perry and Orlando Bloom have), it feels safe to say that you'd recognize their voice anywhere, right? Apparently, that's not always the case. Katy Perry tricked Orlando Bloom on BBC Radio during his Sept. 2 appearance, pretending to be a caller named Gemma, and if you haven't seen the video yet, the result was pretty hilarious.

While on air, Bloom participated in a game where the objective was to choose the best celebrity impression from a group of call-in listeners. Naturally, when "Gemma" called in and said she could do a good impression of Bloom's fiancée, the actor was skeptical, responding, "Oh, well, I'll be the judge of that!" Perry then launched into Gemma's own rendition of "I Kissed a Girl" in her persona's British accent, and unfortunately, Bloom was neither convinced nor particularly impressed. Nice guy that he is, Bloom complimented Gemma anyway, though his face betrayed his true feelings.

That's when Gemma revealed that she was actually Perry herself, joking, "Honey, I thought you knew me better. Do you think we should really be going down this long road if you can’t even tell my own voice?"

This isn't the first time that Perry has playfully messed with her partner. Back in Dec. 2016, the singer took to the comments section of an Instagram posted by Bloom to poke fun at her boo. To commemorate the 15th anniversary of The Fellowship of the Ring's opening day, Bloom posted a series of pics that featured him wearing blue contacts as Legolas and, in one shot, him in his character's blonde wig. "You look like Jen Aniston on the lower right babe," she teasingly pointed out, and honestly, I can kind of see it.

Bloom isn't afraid to have his fun with Perry, either. In Oct. 2018, Perry shared some photos of herself posing in front of a sexy shirtless Justin Bieber poster at 21c Museum Hotels during an impromptu photoshoot for her 34th birthday. "teen idol/american idol," she captioned the series of pics, the last of which showed Perry even caressing Bieber's abs. Bloom responded with a simple yet perfect comment: "Thirsty."

In March 2019, soon after the two got engaged, Perry shared an Instagram Story in which she grilled her new fiancé about whether he regretted the proposal. While watching an episode of American Idol, Perry panned away from the screen and asked Bloom, "Are you sure you want to spend the rest of your life with me, 'Lando? Are you sure?" Bloom responded by jokingly shaking his head no in apparent horror. "FOR THE REST OF HIS LIFE @americanidol," Perry captioned the post.

Perry has always been a goofball, but it seems as though her silliness has rubbed off on her usually-reserved beau. Even though these two aren't rushing to get married, I have a feeling they'll continue making each other laugh (and making fun of each other) for life.