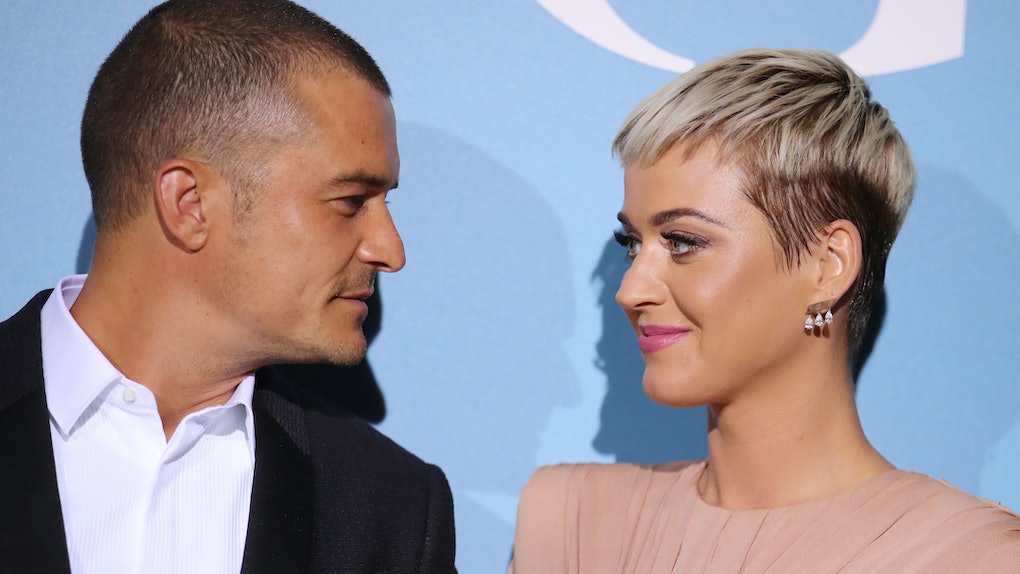 Orlando Bloom & Katy Perry Are Engaged, According To These Reports

What a happy Valentine's Day it was for this celebrity couple. Orlando Bloom and Katy Perry are engaged, according to new reports. Elite Daily reached out to both teams for confirmation but did not hear back by the time of publication. Both the actor and the singer posted matching photos to their Instagram accounts that shows the couple snuggled together with heart balloons floating behind them. Katy has her hand over her face, and you can see that she's wearing a gorgeous ring with a gold band with flower-shaped diamonds and a bright pink stone in the center. It's exactly the kind of ring you'd expect Katy Perry to wear, TBH.

Perry captioned her photo "full bloom," probably as a nod to Bloom's family name. Bloom captioned the same photo "Lifetimes." According to People, Perry's mom, Mary Hudson, also took to Facebook to share the good news and post some (now-deleted) photos of the Valentine's Day celebration they had. She captioned her post, "Look who got engaged on Valentine's Day!" One of her photos shows off Perry's ring with her matching bright pink manicure. Another shows Perry and Bloom holding each other under what seems to be a heart arch built out of red roses.

Fans of Bloom's could have suspected earlier in the day on Thursday, Feb. 14 that an engagement was on the horizon. That's because he shared a pretty telling quote to Instagram. His post read,

A shallow person will have only shallow relationships. Real love is not one person clinging to another, it can only be fostered by two strong people secure in their individuality. Antoine de Saint-Exupery, author of The Little Prince wrote in a work called Wind, Sand and Stars, 'Love is not two people gazing at each other, but two people looking ahead together in the same direction.'

Well, I'd say an engagement is the way Perry and Bloom fit into that quote. He captioned the quote, "Wisdom for Modern Life by Daisaku Ikeda February 14, 2019 ❤️got nothin but love for ya’ll ❤️."

Marriage may not have been on Perry's mind, though, because just one week ago on Feb. 8, she gave her thoughts on love in an interview with Paper Magazine. She said, "I'm very pragmatic and logistical and I am less fantastical about things. I mean, I was married when I was 25. I'm 34. It was almost 10 years ago. I was like, 'One person for the rest of my life,' and I'm not so sure that that idea is for me. I'm just such a different person than I was." A girl can change her mind, though, right?

For fans of the couple, this engagement was a long time coming. Bloom and Perry first met in January 2016 and started dating shortly thereafter. They did take a break from their relationship in February 2017. At the time, their reps told People, "Before rumors or falsifications get out of hand, we can confirm that Orlando and Katy are taking respectful, loving space at this time." From there, their timeline gets a little wonky. They were spotted at an Ed Sheeran concert in August 2017, and then on various vacations through 2018, though it didn't seem there was a confirmation that they were back together. That is, until September 2018, when they made their official back-together red carpet debut at the Global Ocean Gala in Monaco.

I don't know about you, but I'm so pumped for these two. I want an invite to this wedding!