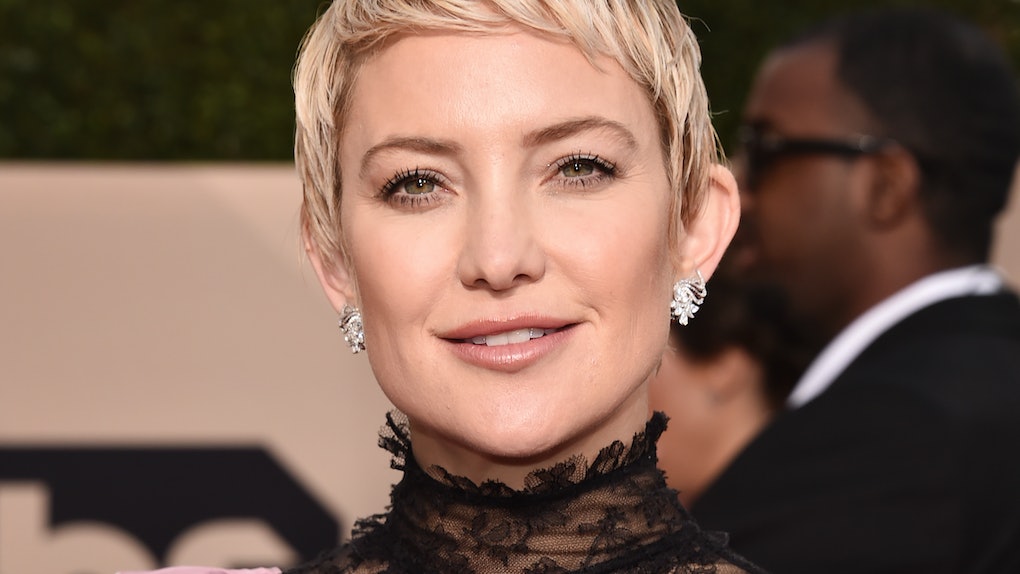 Kate Hudson revealed on April 6 that she's expecting a baby girl with boyfriend musician Danny Fujikawa, and I am BEYOND excited. This will be the actresses third child (the first with Fujikawa), and even though babies can be very expensive, I'm pretty sure Hudson won't have any issues with the cost of raising her daughter. I promise that once you hear Kate Hudson's net worth, you're going to want to take up acting classes ASAP, because wow, it's a lot.

According to Celebrity Net Worth, Hudson has a net worth of $38 million, and no, you didn't read that wrong. It makes sense though, given the fact that Hudson's acting career has garnered success for nearly two decades, after rising to fame in 2001 for her role in Almost Famous. Celebrity Net Worth also points out Hudson has had plenty of other successful films, like the 2003 rom-com hit How To Lose A Guy in 10 Days as well as Bride Wars back in 2009.

With millions and millions (and millions) in her bank account, I think it's safe to say that Kate Hudson won't be hurting for cash anytime soon. Little baby Hudson-Fujikawa has no idea how lucky she is.

Hudson announced her pregnancy in the sweetest way possible. She posted a video to her Instagram account that showed her and Fujikawa with her two sons popping balloons as part of the gender reveal. So basically, it was sort of a two-for-one deal for the world — hearing the news that Kate Hudson is pregnant, AND that she is expecting a little girl.

SURPRISE!!! If you’ve wondered why I’ve been so absent on my social channels it’s because I have never been more sick! It’s was the most sick first trimester of all my children. Boomerangs have made me nauseous, Superzoom is an easy way to have my head in the toilet, food instagrams make me queezy and thinking too much about insta stories made me even more exhausted than I already had been. If you’ve seen me out and about smiling and pretending like everything is amazing...I was lying! BUT! I have broken through on the other end of that and rediscovering the joys of insta/snap. We have been trying to keep this pregnancy under the radar for as long as possible but I’m a poppin now! And it’s too darn challenging to hide, and frankly hiding is more exhausting then just coming out with it! My kids, Danny, myself and the entire family are crazy excited! A little girl on the way 💕

Check out how freaking excited she looks once the big balloons are popped and pink confetti and small, pink balloons emerge:

I'd be jumping up and down too if I saw that! After having two sons, Hudson must be so excited to have a daughter.

Despite being ultra-famous, Kate Hudson has managed to always keep a low profile when it comes to her personal life. In an interview back in September of 2016 with Marie Claire, she discussed why exactly she remains so private:

The reason I don't talk about anything like that is because I have kids. People ask that question as if, 'Oh yeah, it's really healthy to publicly talk about who I am or am not dating when I've got a tween.' [Ryder] can read, and he can hear. I'm not going to indulge in that kind of thing until there's someone in my life who I am introducing to my kids.

She also talked about the struggles of raising children on her own (she divorced from Christopher Robinson of the Black Crowes and ended a long-term engagement from Muse frontman Matt Bellamy):

I don't try to sugarcoat things. I'll say, 'I'm doing the best I can.' I like cooking, I like presenting. I like it to be an experience and [my kids] help me with it, but if they want something after that, I'll be like, 'Look, I'm placing a meal out for you like a king. I can't do everything. I'm going to have to be the OK mom.'

Something tells me that she's much more than just an "OK mom."

And now, with a daughter on the way, we can't wait to see Kate Hudson's little family grow. Kate, if you're looking for baby names, might I suggest Penny Lane?

Just think about it for me.