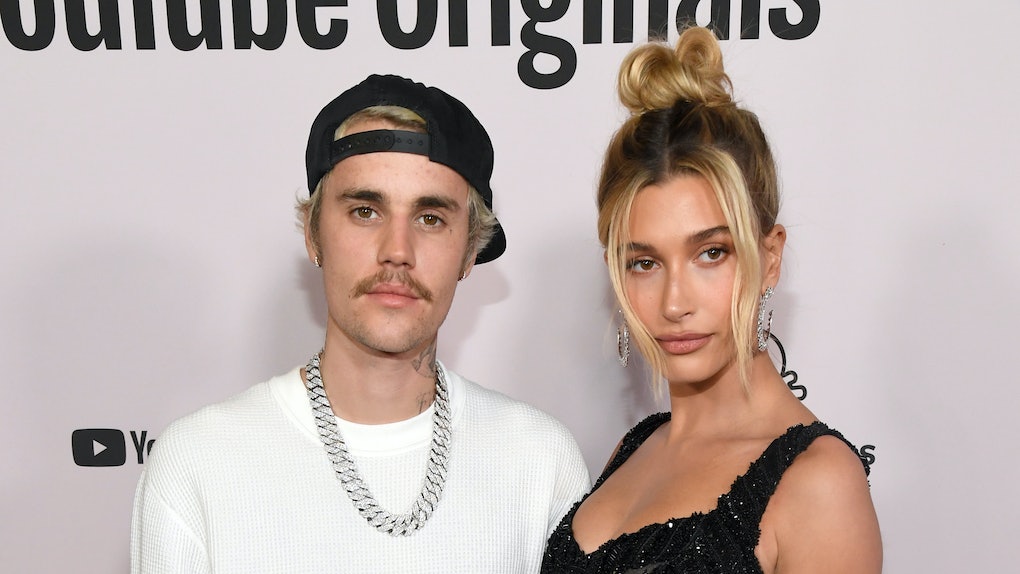 Hailey Baldwin has already shown her husband plenty of support for his new album, Justice, but her new tat may just be the epitome of supportive spouse. On March 29, fans got a look at Justin Bieber and Hailey Baldwin's new matching tattoos: simple peaches in honor of the fifth single from Bieber's Justice album, "Peaches." Celebrity tattoo artist Dr. Woo inked both the pieces, with Bieber choosing to get his peach on his neck and Baldwin on her left forearm. Unsurprisingly, this isn't the first time the tat lovers have gotten ink dedicated to each other.

Back in October 2020, Baldwin got a cursive "J" tattoo on her ring finger in honor of her and Bieber's one-year wedding anniversary, which — awkwardly enough — fans think looks like Selena Gomez's old "J" ring from Bieber. The couple also has matching "G" tattoos in honor of their pastor Chad Veach's daughter Georgia, who was born with Lissencephaly, though the two got their "G" tats before they even started dating (and, even more awkwardly, Gomez also has a "G" tattoo for Veach's daughter). Baldwin and Bieber reportedly have coordinating "style" and "grace" tatsas well, according to celeb tattoo artist Keith McCurdy (a.k.a. Bang Bang).

Though it seems like the two (especially Bieber) are running out of spots for new ink, both have said they're saving space for tattoos dedicated to their future children. During an October 2018 interview with Harper's Bazaar, Baldwin opened up about future tats. "I want more, but I'm keeping space for my kids' names, and certain sentimental things," she explained, "and I don't want to fill all the cute spots before… I get there."

Bieber expressed a similar sentiment during his YouTube documentary Justin Bieber: Next Chapter, which was released in October 2020. "My back is still pretty open. I don't have kids yet, so I'm thinking of getting their portraits on my back," Bieber revealed. Ironically, Bieber also said, "I think I'm done on my neck. That's a Hailey request," but apparently, she made an exception for his new peach.

It's unclear when the Biebers may be welcoming babies, but I have a feeling the peach tats aren't the last matching ink fans will see from these two.