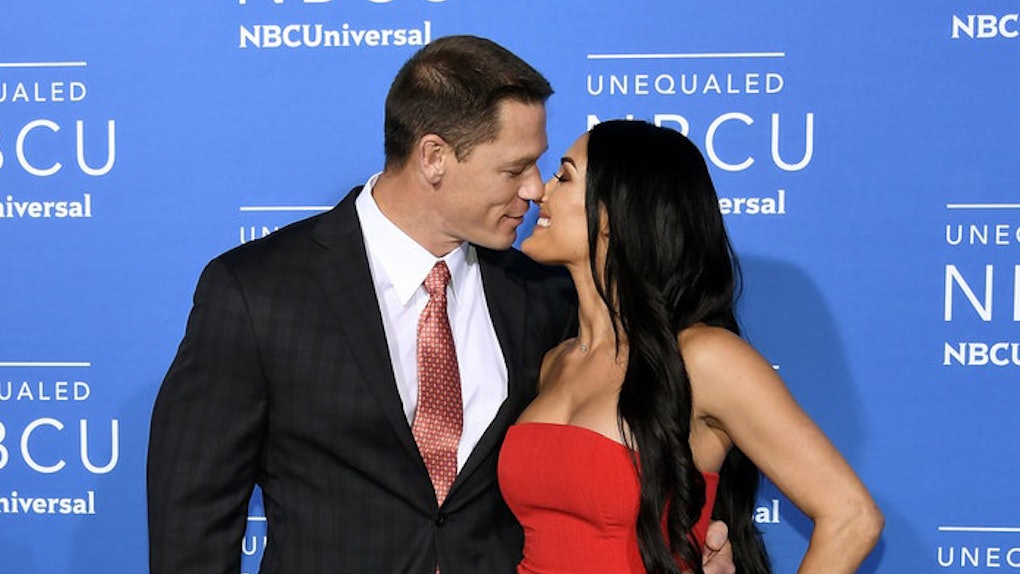 Well folks, it happened. The golden couple of wrestling, John Cena and Nikki Bella, are officially back on. And TBH, I'm way more excited about this than I should be. What can I say? I’m a fan of love! But really, I shouldn’t have been surprised they found a way back to one another, because John Cena and Nikki Bella’s astrological compatibility is off the charts. OK, technically their compatibility is literally on the charts, but I think you know what I mean. Ahem, moving on.

For those of you who haven't been following every twist and turn in this seemingly tragic romance, here’s a quick bit of background on what went down between Cena and Bella leading up to this reunion.

The couple began dating in 2012 and got engaged in 2017, in an incredibly romantic proposal during WrestleMania 33. Everything seemed golden for the couple, who frequently gushed about each other to the press. They seemed well on their way to a May 2018 wedding in Mexico when, in mid-April and just weeks before walking down the aisle, they announced they were calling off the wedding.

People were bummed. The rumor was that the split centered around disagreeing about having children. (She wants them, he really doesn't.) Almost immediately after the split, there was speculation they were still in communication, and they both said things to the press about their enduring love and hope for the future, which, in turn, gave us fans hope that there may be a chance for these two.

As it turns out, we were right to hope as sources have confirmed to People that they are back together for good. As the "insider" explained, "They both got a wake-up call once they canceled the wedding, and they both realized they could fix what was broken.” And that brings us to where we are today.

The latest news is definitely exciting for fans, but anyone who took a look at their astrology charts could have told you there was no way they were going to walk away from a partnership this compatible. Cena's April 23 birthday makes him a Taurus (earth) and Bella, a Scorpio (water), was born November 21 — a true case of when opposites attract. Here's what we know about that powerful pairing.

Their sex life is incredible.

If you really want to see the sexual sparks fly, put a Scorpio and a Taurus in the same bedroom. These signs both have extremely high libidos and show their love and affection through the language of touch. Sensual Taurus loves long passionate kisses and running their hands all over their partner's body. They are true believers in making love and showing how they feel about their partner through pleasure. And Scorpio brings the heat. This passionate and powerful sign lives for sexual connection. They love to keep things spicy and are not happy until their partner is satisfied — over and over. So, yeah, I think you can bet that Cena and Bella have an incredible sex life and physical connection.

They are both extremely loyal to one another.

Both Scorpio and Taurus are very emotional signs, and although Scorpio may try to hide that softer side, the warm and patient Taurus has a knack for bringing it to the forefront. This is why this particular combo of signs is able to forge such a powerful connection, which is extremely important to security-loving Taurus. Both signs value loyalty and trust, and once those things are won it’s hard for either to let go.

That bond is nearly unbreakable for these signs; however, if it's broken, it can be very hard to repair. This may be why both Cena and Bella made efforts to reassure the other that their trust was intact by speaking about each other in glowing and loving terms throughout the split. It also explains why they were able to come back together so quickly.

They are each other’s best friend.

While the sexual compatibility between Scorpio and Taurus is palpable, what is equally strong and is the true core of this connection is that these two signs really connect on a friendship level. They have shared values and beliefs, and they both love to engage in the same activities. (Yes, in the bedroom, but out of it as well.) The fact that both Bella and Cena are both wrestlers and share that intense passion for the sport is just one example of how they are both not only emotionally compatible, but also lifestyle compatible. They both crave excitement and new experiences, but also desire quiet and alone time at home. There is very little friction when it comes to how they actually spend their time and who they want to spend it with. Spoiler alert: The answer is with each other.

So, overall, what we know about Taurus and Scorpio pairings (and can extrapolate about Cena and Bella) is that they are deeply compatible — sexually, emotionally, and in their values. In other words, they're just a really solid fit! So go on John and Nikki, we're all rooting for you!