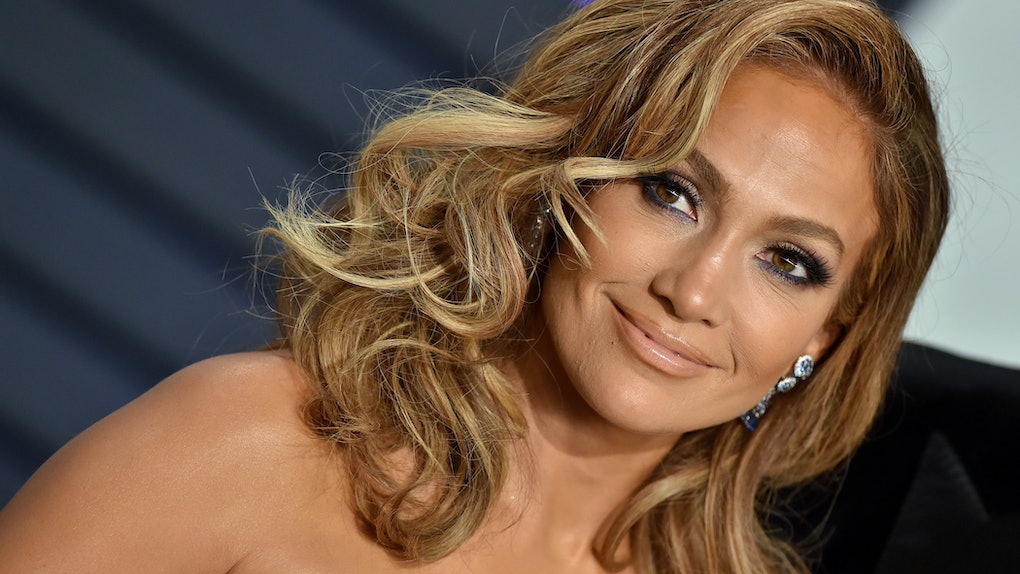 Jennifer Lopez isn't letting the rumors about her reported breakup from Alex Rodriguez get her down. The singer took to Instagram on Friday, March 19, to share a gorgeous picture of her in a wedding dress taken while filming her new movie. Jennifer Lopez's 'Shotgun Wedding' behind-the-scenes Instagram pic features the star in a sweetheart-neckline gown on a beach in the Dominican Republic. If a picture says a thousand words, this one demonstrates she's ready to move past her relationship drama and focus on her movie. Fans might agree — it was liked well over a million times.

"Eye on the prize," she captioned the pic. The World of Dance judge shared the picture a few days after she shut down rumors about her and A-Rod supposedly ending their engagement. “All the reports are inaccurate," the pair said in a joint statement to outlets like CNN, People, and TMZ on Saturday, March 13. "We are working through some things."

Although they never revealed exactly what they're working on in their relationship, a source told Page Six that Lopez was really hurt by A-Rod's January scandal with Southern Charm's Madison LeCroy. (Elite Daily reached out to representatives for the couple for comment on this claim, but did not hear back.)

"There were already problems, but Jennifer was really embarrassed by it," the insider reportedly claimed. However, it seems like two are working things out because A-Rod reportedly flew to the Dominican Republic to see J. Lo. "Jennifer was excited to see him in person,” a source reportedly claimed to People on March 17. "They want to spend time in person to figure out their life together.”

After getting engaged in March 2019, the duo decided to tie the knot in Italy in June 2020. But when the coronavirus pandemic hit, they had to put their plans on hold. As they waited for the world to return to normal again, Lopez started thinking about what it would be like to not have a wedding date at all. "I mean, at our age — we've both been married before — it's like, 'Do we get married? Do we not? What does it mean for us?'" she told Andy Cohen during a December 2020 appearance on SiriusXM's Radio Andy. "And it's just, it comes down to like personal [conversations] like, 'What do you want to do?' There's definitely no rush though."

If the couple do wind up walking down the aisle, then the actor clearly won't have to look far for a wedding dress.